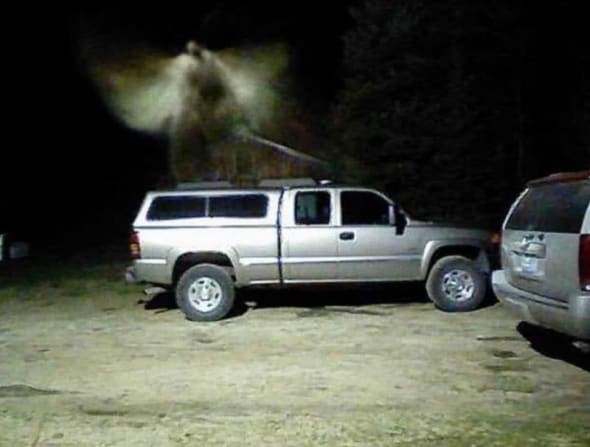 A pastor currently working in Jordan shared a photo from outside one of his parishioners’ homes that has created a lot of speculation.

The pastor, Deneille Moes of Michigan, argues that the image snapped was of an angel atop a truck.

Glen Thorman, the fire chief of East Jordan, said the photo came from his home’s security system, which is triggered by a motion sensor.

Moes’ church posted the images on Facebook, with the caption:

Yep folks… It’s an angel. I guess there is no question who is watching over their residence while they sleep, and yes, they pray that The Angels of the Lord will surround them and their property….These photos have not been altered in anyway. The second photo, the security camera also shot because the angel was moving away. The camera is designed to photograph anything in motion or unusual…. lots of tears today when they opened the security on their camera …WOW!

A photo expert told Christian Post that the image was probably of a moth. Jordan Rivers Church released a statement insisting it couldn’t have been a moth because it was too cold.

We have studied the photo from all possibilities. This ‘Being’ is behind the truck with translucent wings. We checked the temp at 12:49 am for this location. 46* was predicted in town, 39* degrees at the Thorman’s perhaps lower, but the average for his home is a 7 degrees difference in temperature. (Their home is out in the sticks which is much colder than us near Lake Charlevoix) The photograph was taken early morning on the 9th. @ 12:49… And it’s believed the ground was still cold.

We contemplated the piles of snow at the residence until May 3rd, (left over from the 3 1/2 + ft. snowstorm April 16-20th).and accounted for the melt down factor which took quite a few days. …And although moths have been seen in temps of 35* according to research, not a mosquito or moth has been seen yet to-date in their neck of the woods or ours, not sayin’ there ain’t any; just that we haven’t seen any yet in these parts….and tonight, we have another round of frost. So… that’s the last of the scientific research. Our conclusion remains the same… Angel.

Watch: The Trailer for Spike Lee’s ‘BlacKkKlansman’ Is Taking No Prisoners