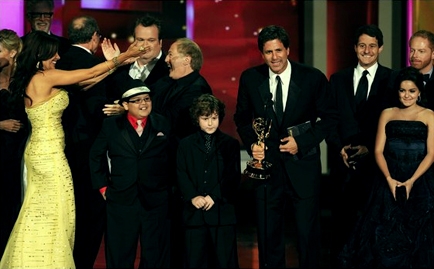 The notion of watching the Emmy Awards on television has always been somewhat curious. Why do we watch? We don’t vote for the winners—this isn’t the People’s Choice Awards—and no matter how desperately we lean toward the TV with a pillow clutched to our chest, pleading for Lost to please win something this year, it seems to falls upon deaf ears.

But that’s the point. The Emmys aren’t for us. They don’t know we exist. The Emmys is a place for the glitterati to gather and honor each other’s creative achievements, and it’s a time for us to ogle the fancy jewelry, the designer dresses and to mute the TV while doing so to avoid having to listen to Billy Bush’s voice.

At least, that’s what it was like in previous years. For the 62nd annual Emmys, it seems as though its directors decided to take a look at the America that was watching—and showed us it knows quite a bit about the American culture that lies beyond those Hollywood Hills.

Yes, the Emmys knows there is a recession—the opening number showed that even the Glee kids couldn’t afford the price of admission!—but to soothe us, it provided one of the most harmless and unsurprising awards shows in years, along with a rocking Bruce Springsteen intro that reminded us that we were all born to run. Sure, there were a couple of surprises here and there, like Edie Falco’s win for Nurse Jackie, but for the most part, there was no big sweep—everyone got a turn at a win.

All In the Family

This year’s Emmys were also compared to a family reunion at one point, bringing to mind a comforting, genteel gathering of those who love us and champion us on. Its “living room” of a stage was adorned in bright colors, letting us know happier times are on the way; host Jimmy Fallon served as the affable cousin who made us giggle with his impressions of Boyz II Men, Billie Joe and Elton John; beer-distributing Ricky Gervais was our silly, drunk uncle; and our dear, raunchy grandmother was none other than Betty White, who some may argue has managed to thus far avoid jumping the shark.

The Emmys also showed us that they know what America is made of: a diverse people who all deserve a day in the sun. Gone are the days when only the handsome, suave and wealthy men swept the awards. This was the year of the nerd, as Jim Parsons demonstrated when he picked up the Emmy for Lead Male Actor in a Comedy series for The Big Bang Theory. And openly gay Jane Lynch nabbed the award for Supporting Actress in a Comedy for Glee and Eric Stonestreet (a straight man playing a gay man) won for Supporting Actor in a Comedy for Modern Family.

Even autism, which has been gaining national attention in recent years, and afflicts millions of people across the nation, has been noticed by the Academy. It awarded Temple Grandin, the HBO made-for-TV movie detailing the life of a woman with autism who transformed the agricultural industry, the biggest sweep on the night. It won several awards, including Best Made for TV Movie, and Outstanding Lead Actress in a Miniseries or Movie (Claire Danes).

Of course, the Emmys noted that there exists a great deal of suffering in today’s society, and acted accordingly. The sullen, dark third season of Mad Men was awarded Best Drama for the third consecutive year; and the awards for Best Actor and Best Supporting Actor in a Drama Series went to Bryan Cranston (in another well-deserved three-peat) and Aaron Paul, respectively, for Breaking Bad, a tortured, sinister look into the lives of American men and women.

It should be noted, however, that the greatest suffering of all was Hugh Laurie’s denial of an Emmy, despite having been nominated five times for his role of Dr. Gregory House. Not to worry, Hugh. Susan Lucci survived 18 straight years of losses to take the stage and receive her award. Your five are just a bat of her well-curled eyelashes.

The Emmys Care About People

Tina Fey aside, writers and producers aren’t generally recognized at awards shows for longer than a few seconds. Directors aren’t either, but this year, the Emmys introduced a question for each nominee to answer as their names were displayed before the winner was announced. It was no longer just solely about the big Hollywood names this year, and it was a nice touch to see the folks who make things happen off-camera have a turn in front of the camera.

The humanitarian efforts of everyday Americans was also noted; and far-from-everyday American George Clooney took the stage to accept the Bob Hope Humanitarian Award. It has only been awarded four times, and he encouraged his peers (and those watching) to continue to find ways to use their resources to help those who are suffering around the world.

Just as the Emmys paid attention to us this year, maybe we can pay more attention to the show, too. Sure, there are some things it gets wrong every now and then (like reciting introductions to presenters that Twitter users sent in a few weeks prior to the event), but we can help. We can up the ratings a bit and catch the show next year. If we’re creative, maybe we can make our own made-for-TV miniseries, seeing as how there were only two nominees in that category this time around. It can’t be that hard, right?

Hey, if we win, we can have the PC guy narrating little bits of trivia about our lives as we walk up to the stage, just like this year’s winners did. And, my friends, there would be absolutely nothing sweeter than that. Unless it’s the Mac guy.

The Strength of Small