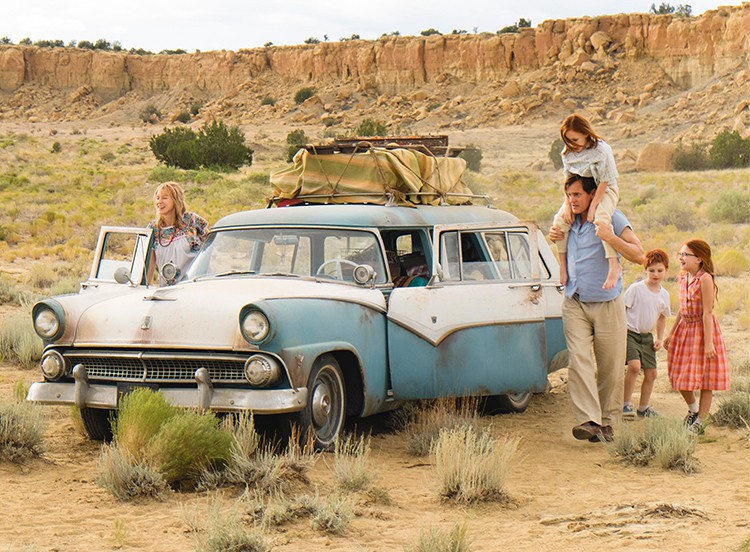 Some movies are going to divide audiences. Opening this week is one such film, The Glass Castle.

The movie, based off of the book of the same name, tells the real life story of Jeanette Walls (played by Brie Larson) and her upbringing in a highly dysfunctional family. The film holds back on portraying neither Walls’ fondness for her parents, nor the depths of her parents’ failures.

Throughout much of the film, the story never decides whether it wants to praise or demonize Rex Walls, Jeanette’s father played by Woody Harrelson. From scene to scene (and sometimes within the same scene), Rex will be portrayed one moment as an incompetent, idealistic drunk, unable to take care of his family and then, within moments, it will portray him as a kind, caring, intelligent and charismatic father.

We see Rex as a broken man with the potential to be a great man, but his inability to overcome his demons leads him to drag his family through Hell.

Then, when the film moves into the third act, the storytelling shifts more toward Hollywood tropes and clean resolution. Unfortunately, given the journey up to this point in the film, this ends up sending a jumbled message that almost praises a neglectful and abusive father.

Walking out of the theater, my friend in the screening immediately declared that the film was the most tone-deaf film he has seen this year. Another remarked that it was the worst movie she had seen all year, and a morally repugnant story attempting to praise a repulsive man. While I can completely understand where both of them are coming from, that wasn’t my experience with the film at all. In fact, while these criticisms are likely true of the execution of the film, they’re not the intent of the film at all.

Here’s the thing: For the film’s many storytelling flaws and clichés, it may be the best presentation of the confusion, nostalgia and cognitive dissonance that many people who grew up in dysfunctional homes struggle with.

Many scenes in the film attempt to portray Rex’s positive side through his many speeches and proclamations of a better future. In those scenes, the children see these scenes at moments of hope. The musical score presents them as uplifting moments, but they’re often hard to swallow as an audience member who knows what’s really going on. These scenes are played entirely wrong because they’re played as inspirational when they’re truly hopeless. But the movie isn’t meant to be a tale about the horrors of negligent parents—it’s a story about how we accept and process the tragedies of life, and move forward.

We can both be repulsed by someone’s behavior, and still have nostalgic memories of those horrific incidents. In this way, The Glass Castle portrayed those “hopeful” childhood moments properly. Because sometimes our memories and feelings toward the past don’t match how we would interpret them as an adult.

When your father is both daddy and the demon, you don’t usually get the luxury of writing him off as just a demon; you have to live in the tension between the two. Trust me.

I grew up in a largely dysfunctional family, with an alcoholic father. Virtually all of my stories about my father involve alcohol. Growing up, I never would have told you that I was abused but, as I recalled some childhood stories humorously to some friends as an adult, I’ve realized mid-story that I was telling a story of child abuse.

But as damaging and hurtful as my childhood was, these are still my stories that I tell with an odd, confusing sense of nostalgia. On many occasions, I’ve found myself telling stories from my childhood that made some people around me incredibly uncomfortable. Others, however, found my blunt recollection of my childhood refreshing. For some people, sitting around sharing the equally humorous and horrific stories from our childhood is a way to process the incredibly complex feelings we have toward our past.

I neither want to look at my past and my father with rose-colored glasses, nor reflect on my childhood exclusively through the lens of how others wronged me. There were good times, and there were bad. Some of the most interesting stories are the most atrocious. But, they’re my stories, and I want to share them.

This is how I saw The Glass Castle.

It was neither a criticism nor a celebration of the troubled man who was Rex Walls. It was an exploitation of the incredibly complex and confusing relationship between a broken father and his hurt daughter. It was a look at how we can love, hate, like, despise, respect and disrespect someone all at once. Emotions and relationships are always complex, and they’re frequently illogical and contradictory.

That is the story of The Glass Castle, and it can help us to understand how others process their own families.

Sean Chandler is a blogger, speaker, YouTuber and 10-year student ministry veteran. You can read his thoughts on life, sin, and grace on his personal blog, www.seanchandlerlive.com. For his movie reviews, check out www.youtube.com/seanchandlertalksabout.