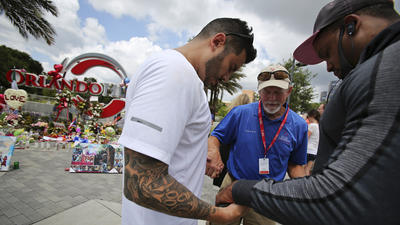 In the continued aftermath of the June shooting of Pulse nightclub, Orlando Health and Florida Hospital have announced that they won’t bill survivors of the massacre for out-of-pocket medical expenses, according to the Orlando Sentinel.

The hospitals will write off at least $5.5 million in hospital care.

“The pulse shooting was a horrendous tragedy for the victims, their families and our entire community,” Orlando Health President and CEO David Strong said. “During this very trying time, many organizations, individuals and charities have reached out to Orlando Health to show their support. This is simply our way of paying that kindness forward.”

Orlando Regional Medical Center—an Orlando Health hospital—which is just a few blocks from the hospital, treated 44 of the victims in the immediate aftermath of the massacre. Nine of the people who arrived at the hospital died shortly after, and their families won’t be charged either. Orlando Health will bill health insurance providers for those who had coverage, but they will write off whatever isn’t covered.

Florida Hospital, which treated a dozen victims, won’t bill insurance companies and they won’t bill any survivors for any follow-up surgeries needed.

“It was incredible to see how our community came together in the wake of the senseless Pulse shooting,” said Daryl Tol, Florida Hospital’s president and CEO. “We hope this gesture can add to the heart and goodwill that defines Orlando.”

One victim is still hospitalized.

Why the Term ‘Missionary’ Can Fail Missionaries