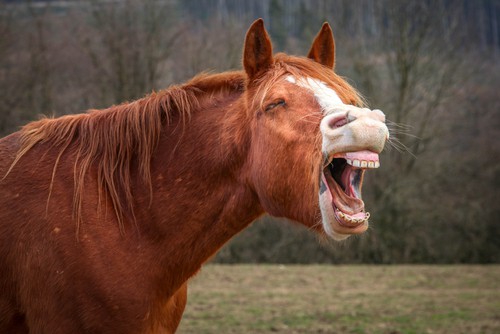 Not to feed a fed horse here (we’ll explain) but PETA seems to exist purely to prove that the lovey-dovey, moon-eyed stereotypes about people who are concerned about animal cruelty aren’t entirely without merit. Nearly every stunt pulled by the People for the Ethical Treatment of Animals seems bound and determined to come across as unaware and useless as possible, but they really outdid themselves yesterday. Evidently concerned about various “anti-animal” idioms in the English language, PETA tweeted some alternative suggestions and just get a load of this.

Words matter, and as our understanding of social justice evolves, our language evolves along with it. Here’s how to remove speciesism from your daily conversations. pic.twitter.com/o67EbBA7H4

OK, where to begin. It’s like shooting fish in a barrel here. Oops, sorry – it’s, like …spooning fish in a towel? First of all, it’s an open question as to whether or not anyone at PETA understands what “take a bull by the horns” is supposed to mean. “Feed a fed horse” at least kind of has the same general connotation as “beat a dead horse” so we’d be inclined to let that one slide except the notion of feeding scones to birds is so insane as to render this whole entire enterprise stupid.

Nitpicky drivel like this is very funny, obviously, but it’s worth noting that it’s also destructive. Animal cruelty is a real problem. Videos of slaughterhouses where cows, chickens and pigs are kept in heartless captivity, stuffed with chemicals until they are unceremoniously killed shock and disturb, as well they should. The conversation about the ways we as a society have normalized inhumane treatment of God’s creation is important and worthwhile, but it’s a tough one to have when organizations like PETA derail it with whatever it is they do.

In a follow-up tweet, PETA defended their argument with this tripe:

Just as it became unacceptable to use racist, homophobic, or ableist language, phrases that trivialize cruelty to animals will vanish as more people begin to appreciate animals for who they are and start ‘bringing home the bagels’ instead of the bacon.

Jon M. Chu and Emily V. Gordon Will Develop An Animated ‘Play-Doh’ Movie Because Why Not?

Comparing “bring home the bacon” to racist, homophobic and ableist language only goes to show that PETA neither understands what animal cruelty is, or what racism/homophobia/ableism is. It’s difficult to imagine an organization that hobbles their own cause more than PETA, to the point where it wouldn’t be all that surprising to find they were an Outback Steakhouse-backed false flag operation (not to jump the shark or …bump the snark?). And the sooner people who actually care about the ethical treatment of animals move on from PETA, the better all people and animals will be.