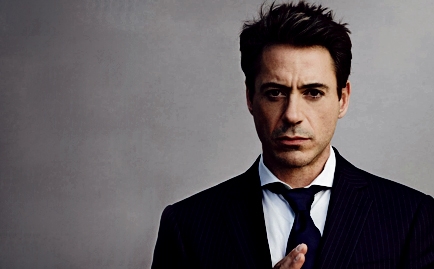 Robert Downey Jr. pulled off one of the greatest comebacks in Hollywood history in 2008 when he starred in the back-to-back summer smashes Iron Man and Tropic Thunder, even scoring an Oscar nomination for the latter film. That one-two punch at the box office has since been followed by last Christmas season’s megahit Sherlock Holmes, putting Downey in the rare and enviable position as the star of two lucrative franchises.

But things didn’t always go so well for the star, who grew up as the son of offbeat writer-director Robert Downey with a home life that placed no boundaries on bad behavior. In fact, Downey Jr.’s father even gave him his first marijuana joint before he was 10 years old, setting off a decades-long battle with severe drug addiction and wildly erratic behavior that nearly ruined his promising acting career (he was previously Oscar-nominated in 1992 for his portrayal of legendary actor Charlie Chaplin in Chaplin) and eventually landed him in prison.

Yet Downey credits that prison stint with helping him re-sort his priorities and learn humility, while ultimately saving his life. Today, he’s been sober for years, has a full slate of work with a constant barrage of offers coming in, and has a happy home life with his wife and young kids. And he’s in a new little movie called Iron Man 2 opening today:

What was it like seeing the audience response to the first film?

Downey: I’ll never forget, it changed my life. I remember riding from theater to theater with [director] Jon Favreau and seeing theaters keep adding times like they were changing train schedules. It was so palpable, but I guess people reacted as much to me in the character and Gwyneth [Paltrow]. The whole idea is there was just a tone to the movie that people enjoyed.

What were the challenges of making the second Iron Man film?

Downey: We went a little batty and then worked on hashing it out. It was this never-ending pursuit of the best possible ideas.

How did you all choose to reveal Iron Man’s identity?

Downey: We knew when we did that that it took away a bunch of opportunities, but then we thought, No, it affords us more because now we have to explore what does it mean to say something but not know what you’re saying at the time. He says it because in the moment, he wants to be direct and honest to the public, and that’s when he says it and it brings strange characters from his family’s past looking for him.

What was it like working with Mickey Rourke as the villain, Ivan Vanko?

Downey: Mickey’s Ivan Vanko, a very very very smart son of an ex-partner of Howard Stark, Tony’s dad. There’s kind of a road-not-allowed-to-travel in that Vanko’s dad died in obscurity, penniless and unhappy, and yet Tony doesn’t know that he has some involvement in why Tony was able to survive, which is kind of a perfect setup for the showdown.

The Monaco racetrack scene is phenomenal, and likely the one most people pick as their favorite in the movie. What were the challenges involved with that scene?

Downey: I remember shooting that at Downey Studios, ironically, and we also had a bunch of guys advising us [that] Mickey had a lot of his own ideas of how he wanted to appear and choreograph his moves. Obviously he’d done The Wrestler and been a boxer, so we trusted his instincts. But mostly his instincts into the psyche of this guy was quite intimidating.

I don’t want to give away how and where it’s used, but the suitcase suit in the movie is pretty amazing.

Downey: I always thought, Why do we not address the fact that Tony Stark is a very accessible person, and how would he protect himself in the event of an emergency? Thus a new piece of tech we get to enjoy.

Scarlett Johansson is a new addition to the cast. What did she bring to the table?

Downey: Scarlett Johansson actually has a dual role as both Natalie Rushman and the Black Widow. She probably had the toughest job because it’s not like she dresses her way for her secretarial position. She’s kind of leading Tony back to this super-secret org he’s always been a part of whether he knew it or not: SHIELD.

Yet even with Scarlett in the picture, Tony’s relationship with Pepper Potts (Gwyneth Paltrow) is also evolving. I’m impressed with the strength of the women characters in these films.

Downey: It was so central to Iron Man’s success that we thought, Are we gonna do more of that or up the stakes? We considered it, and when you think about Gwyneth, you think she could probably do anyone’s job so we moved her way, way up in the company and it changed the status between she and Tony. Pepper, at the end of the first movie, even though she’s still his assistant, you feel she’s his equal. I think a lot of women appreciated that she wasn’t just a two-dimensional mid-century idea of “the gal.”

Downey: Literally a different persona in that Don Cheadle is playing the role now. He’s someone I’ve always admired a lot. Again, to up the stakes there, anyone who looks at the poster knows 2 is about two Iron Men. One of my happiest experiences was how we were able to really craft that and not be 2D, and I see Rhodey’s conflict and the way he’s gonna unfold is gonna be more interesting than you might think.

Finally, what do you think is the key to your relationship with director Jon Favreau?

Downey: Jon Favreau is my brother, who also happens to be my director. I don’t think either of us would be where we are without working on this together. Sometimes we have this uneasy alliance because we’re kind of conjoined by this great success, but for the most part it comes down to hashing out ideas in a room. That’s where we belong.

Past the Self-Esteem Shop