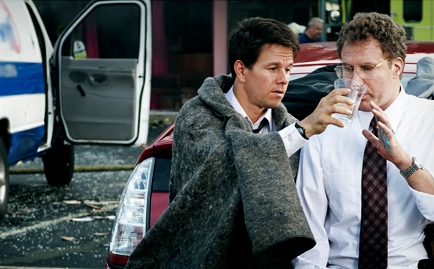 Will Ferrell and Adam McKay have not only been friends for the past 15 years since they first met on the set of Saturday Night Live (where McKay was head writer). They’ve also become an inseparable professional team in filmmaking, unleashing four of the funniest films of the past decade (Anchorman, Talladega Nights, Step Brothers and their newest, The Other Guys) upon a public hungry for films that are just funny.

The duo also have extensive experience in comedic improvisation, with Ferrell having risen through the ranks of Los Angeles’ esteemed Groundlings troupe before earning his SNL stardom, and McKay having revolutionized America’s grand palace of improv, Second City in Chicago, during his run there as an actor and writer in the early 1990s.

The two of them spoke recently about their new film and the joys inherent in destroying New York City in the name of laughs.

Describe The Other Guys in your own words, Will.

Ferrell: There’s a power vacuum that exists and everyone’s vying for who’s going to be the next star team to make all the headlines and all the big drug busts. We’re the guys who are always sitting in the corner next to the big star cops, and we see our chance to rise up is now.

And how about your character? He swings from mild-mannered to enraged in a heartbeat.

Ferrell: Allen Gamble’s a very interesting guy. At first, in appearance, he appears to be a very buttoned-down type of guy who shows up at work right at 9:15 and stays til the last minute. A very sweet guy, but even though Terry abuses him and makes it very clear that he doesn’t want to be near him, Allen lives by the sticks and stones principle: sticks and stones may break my bones, but words can never hurt. So say whatever you want, but I still just want to be your friend.

How did Mark Wahlberg adapt to such an improvisational atmosphere after a career mostly rooted in serious dramas?

Ferrell: Mark naturally kind of does all the things that we do in a way—it’s really just about listening, keeping an open mind and being willing to try this stuff that at the time you may not think is going to work and just try anyway. Being willing to take a chance on situations that may be a little uncomfortable as an actor, but also having a lot of cool stuff happen by being open to freefall.

Tell us about when you and Adam first met.

Ferrell: Me and McKay have known each other since ’95. We met on SNL. He’s one of the most creative directors I’ve been around because he writes on his feet. Three or four people may be throwing out great lines, and the only challenge is remembering them all because it’s so fast and funny. He creates such an environment where you can’t really make a mistake. A lot of times in the movie, Mark had to do the hard stuff. And I literally just stood there and said, “Watch out!”

You recently went to the Comic-Con fan convention to plug the film. What was that like?

Ferrell: Comic-Con fans are the best fans in the world, real diehards who know every line from every movie, and you realize, thank God, they love this movie so much. They’re the ones who go to movies eight, nine, 10 times and buy the DVDs, so it’s important to go.

How’d you guys think up this premise?

Ferrell: Adam came up with the idea.

McKay: It was after dinner with Will and Mark. And I looked at a lot of different ideas, then one night at 3 a.m. I sent out an email asking, "What about if it’s about the cops whose desks are next to the star cops?" And that was it. A really fascinating story.

Will, do you get a lot of fans bugging you on the street with quotes from your movies?

Adam, how’d you decide to go in an action direction with this film, and was it hard?

McKay: I love action movies. I love all kinds of movies, so as a film geek it’s amazing to shoot all this stuff. We had the guy who shot the Bourne movies as our director of photography, and we had amazing stunt guys. Every day Will and I would look at each other and laugh, going, “We just shot down a helicopter” or, “We just shot out the Gehry building on the West Side.” It’s just pure kind of geek heaven, and you just hope it doesn’t suck. But I think it turned out pretty good.

Who’s your favorite character, Will?

Ferrell: I’m lucky in that I’ve gotten to do films I’ve had such a good time doing. But Ron Burgundy is my favorite because it took three years for anyone to listen and let us make that movie, yet it’s really lived on and taken on a life of its own, and that’s really satisfying.