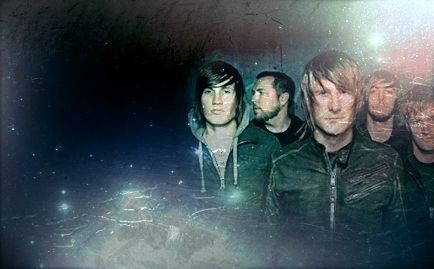 Anberlin’s new album, Dark Is the Way, Light Is a Place, is out today.

What can people expect from your fifth album, Dark Is the Way, Light Is a Place?

This one, as far as the production, is not even in the same ball park as the others. This is [producer] Brendan O’Brien. He’s worked with great people like Bruce Springsteen, Pearl Jam, Tom Petty, Bob Dylan. So his hand is all over this record, and I think that’s going to set it apart. But also, I feel like this is the first complete album we’ve ever done. The other ones  had great songs, but this one, I feel like, is the most cohesive record we have ever assembled.

O’Brien approached you guys first about producing your new album. What was it like being praised by someone who has worked with music legends?

When the band was asked by the label to assemble what producers we wanted to work with, we made our list, and Brendan wasn’t even on it. Not because we don’t adore Brendan, but because he’s way out of our league! He had just won a Grammy for producer of the year, and he won a Grammy for AC/DC’s record last year. We never thought to even put him on our list. So he knocked on our bus one day in Atlanta, Georgia, and came on and was like, “Hey, I want to do the rest of your record from here on out.” And we freaked out. When Brendan O’Brien says that he wants to do your record, you don’t really think about it. It’s kind of automatic.

Is it tough to do something creative or to reinvent your sound at all when you’ve been at this for so long?

No, because we really didn’t feel the soul that we knew we had the potential to have on our last record, New Surrender. So for us, coming into this record, it was like a breath of fresh air. Everything was in our element, we had the producer, we had the record label. Our last record, we had such strain because we were on a new label, with a new producer and a new guitarist, recording in a new city for the first time. The pressure was just immense, from the fans, and the band and everyone. And on this record it was completely the opposite. We felt like it was only up from the last record.

The title for your new album, Dark is the Way, Light is a Place, comes from a Dylan Thomas poem. What was it about this line that spoke to you?

It was kind of the brutal fact that life isn’t always perfect. We’re going to lose loved ones, we’re going to fail at our greatest attempts sometimes. But at the end of the day, there’s hope. Even in the darkest moments, there is still hope out there. For us, and for me personally, that’s in my faith. I feel like it totally encapsulated the record itself, the music itself, the lyrics itself. Even on the song “Down,” when it talks about how I felt like I was a better Christian long ago than I am now. But still there is Someone out there that’s going to catch you and keep you from falling, and that’s kind of what the record was for me.

You co-founded Faceless International to fight human trafficking, and you guys have done a lot of other humanitarian work in places like Africa and India. How have these experiences influenced your life and your art?

I think there is a direct correlation, especially with things like social justice. It impacts my life. You can’t walk away from the red light district in Calcutta, India, staring at a 12-year-old girl who is trying to sell her body to you, and walk away and say that you can’t be changed. We saw 10-year-olds that had children, we saw 9-year-olds who were pregnant, and you can’t just walk away and go, “Oh, that’s life.” It definitely impacts my music. I may not write a song directly explaining those events, but I know in the back of my head that my longing for these children to be loved and taken care of and my longing for social justice, it definitely comes out in the music.

Britney Spears: ‘I No Longer Believe in God’

What is the main lesson you’ve learned over the past eight years with Anberlin?

That all is never lost. Tomorrow is going to be much better. We’ve been though the whole gamut in Anberlin. We’ve slept in abandoned houses. We’ve shivered together with one blanket. We’ve begged our parents for gas money just to make it to the next show. We’ve been absolutely broke, where I came home and had to have two jobs just to pay for a cell phone. I had to sell my car because I couldn’t even afford insurance. We’ve just been through it all, and I just feel like all is never lost. As long as you are motivated, and as long as you just keep going and keep pursuing whatever it is that makes you dream, whatever inspires you, as long as you keep going after that, all will work out.

Is there a song on the new album that you’re especially attached to?

For me, “Down” is the most meaningful. “Down” is the one that I go back to. [It’s] like heart-on-the-sleeve, just absolutely baring all that’s left of my soul onto a tape, and then put out on a CD.

Your song “Feel Good Drag” was announced to be featured on Guitar Hero 6. Are you guys going to compete against each other on your own song?

I’m not trying to brag or anything, but I’m probably the best Guitar Hero player out of all of us, which is kind of funny because I don’t even play guitar! They’re going to have to step up their game if they want to compete with me. They can pretend all they want on the easy or medium levels, but when they want to get to the harder difficulties, then they’ll have to come my way.

Finding Meaning In Your Workplace