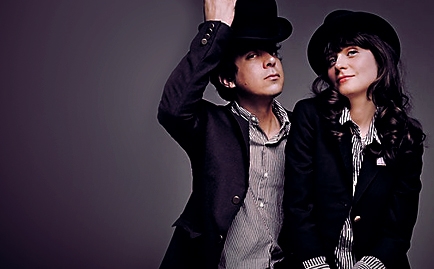 If there were any concerns floating around that She & Him would simply be another musical vanity project for a well-established actress—in this case, (500) Days Of Summer star Zooey Deschanel—they were quickly brushed aside in 2008 with the release of Volume One. The fine collection of ‘50s and ‘60s AM radio-style pop and country tunes was bolstered considerably by the dulcet vocals of Deschanel combined with the straight-laced production of her musical collaborator, M. Ward.

The pair is gearing up for round two, with Deschanel and Ward releasing Volume Two today. As the title suggests, the new album is a continuation of both the Brian Wilson/Phil Spector-inspired production style that marked the first album, but also exhibits growth—especially noticeable in Deschanel’s singing and songwriting. RELEVANT caught up with the duo in some rare downtime between projects to speak about the new album, their working methods and how an episode of MTV’s Cribs unexpectedly offered some lyrical inspiration.

How have you found the time to record a new She & Him album amid all the other projects you’ve been working on?

MW: It’s definitely tricky, but we just made it a priority to make space in our calendars ideally when we’re in the same town anyway. So if I need to go to L.A. for a week for an M. Ward project or a Monsters of Folk project, I’ll just make it a point to spend an extra week in L.A. working on songs with Zooey. She did the same thing with coming here to the Northwest. I think it’s easier than it sounds and it looks.

How do you two write the songs together? Do you share ideas via email or just when you get together?

ZD: I write the music, so I will usually record a demo with piano and a lot of back-up vocals and some sampled drums. I email the song to Matt who then thinks about production ideas. We then chat about what we think it should sound like. Sometimes the songs end up being very close to how the demos sound, and other times the instrumentation and sound completely changes in the recording process. Matt has really impeccable taste so if he has an idea, I am always keen to try it.

MW: She sends me a lot of songs, and I come back to her and say, “This song is finished; I feel that this song will fit in with the overall vision of the production.” It’s a very precise and very smooth running machine. We both love the roles we have in She & Him.

There’s also a more choral element to a number of the songs on Volume Two—”If You Can’t Sleep” in particular. What inspired that?

ZD: I have been a harmony enthusiast since I was a child, singing in choir and with friends growing up. I always put a ton of harmonies on my demos. Arranging vocals is one of my absolute favorite things to do. I had recorded a demo of “If You Can’t Sleep” that was all my multi-tracked vocals, so when we went into the studio, we decided to do the same. All of the tracks are my voice and there are something like 20 tracks of just vocals. I wanted it to sound like a string section.

The track ”In The Sun” feels a little more rocking and driving than anything in your past. What made it different?

ZD: My demo for that song was a bit slower, and Matt suggested we use a beat reminiscent of the Bee Gees when we went into the studio. I was surprised at how well it worked—I had originally written it with a slightly more complex chord progression, but I made it a little more simple when we decided to rock it a bit more. It’s fun to work with Matt because he will bring ideas to the table that I never would have thought of that bring out different qualities in the songs. It’s very exciting to see.

Some of the songs, like “Sing,” seem to have very pointed lyrics. Is that one about someone specific?

ZD: It’s not so much about anyone specific. I was watching TV and Master P was showing MTV his house and his ceiling was gold-plated, which I thought was funny. It’s more about the way I feel watching TV alone in the middle of the night than anything or anyone in particular.

How much of yourself do you put into your lyrics? Do you worry about people attributing lyrics to certain aspects of your life too much or is that just the nature of the beast?

ZD: Some of the lyrics are personal, some aren’t. Some are stories; some are about other people I know, but [I change] around the perspective. The one thing I can say is that the lyrics are not usually what they seem. The obvious answer to their origin is almost never the real answer. I had a friend ask me about a song on the last record called “This Is Not a Test,” whether it was about being an actress. But the real answer was that it was about pioneers on the wagon trail to Oregon and California during the Gold Rush.

There’s an effortless feeling to your music—does it feel that way when you’re making it, or does it take some time to get worked out?

ZD: It definitely flows very easily. I love working with Matt. He has great taste and he’s an exceptionally musical person.

MW: It really is pretty effortless, and we have just a mutual admiration for what we love to do. “Effortless” is a great word for it.

Does it make your job that much easier knowing Zooey is going to be handling the songwriting and Matt the production?

MW: I think—if I can use a sports analogy—when you know the position your teammate is playing, it gives you freedom. Having the knowledge that this person is playing this position, and I’m playing the other position—it makes the ball move faster. I love the songs and I love working with Zooey’s voice. If you have great songs sung by a great singer, it makes my job easy. You don’t need to rely on tricks or wizardry to make the songs sound good. I’m working with great ingredients.

So, will there be a Volume Three?

ZD: I certainly hope so!

MW: I think it’s safe to say there will be a Volume Three.