Hey, you. You’re coming up on the other side of a global pandemic that shut down life as we know it for over a year, and you’re getting ready to re-enter the dating scene, right? Being a young, modern guy, you’re familiar with all the dating apps but they just don’t quite capture the relationship energy you’re looking for. You’re looking for someone who gets you. Someone with a commitment to their faith despite the changing moors of society. Someone who knows that men are the boss and women should stay home where they belong.

OK, well, that last part may not apply to you but it does apply to the people backing a Kickstarter to launch Dominion Dating. Dominion Dating is a new online dating service that will put all the soy boys and feminazis in their place by making all members agree to “affirm male headship as normative in the spheres of family, church, civil governance and society-at-large.”

Well, that’s a little worrisome and that’s it’s just the beginning. The Dominion Dating website notes that “Our members agreement attracts the right people and repels the rest!”

“It’s robust, deeply biblical and down-right offensive to the masses of culturally-conformed Christians who flood most dating sites!” it continues. Fair enough. Obviously, robust, biblical principles can be and often are offensive to the culture at large, but these particular rules are offensive for a whole host of non-biblical reasons.

For example, people who sign up for Dominion Dating must affirm that God’s plan for women is that they exist as “housemaker and helpmate, in glad submission to a husband.” And while “[w]e recognize the necessity, at times, for women to seek employment outside the home,” all signers have to “reject ‘careerism’ as normative for women.”

So any woman with career ambitions need not apply.

Is there a video? Oh, you know there’s a video. Buckle up.

The member agreement also requires anyone on Dominion Dating to be a member “in good standing” of an evangelical church for at least three months before signing up. You probably won’t be surprised to learn that there are strict rules about no sex before marriage and pornography watching, but don’t miss the rules about “dressing sensually or immodestly” and “entertaining lustful thoughts.” Not sure how those things are going to be policed, but best of luck in the attempt.

They also try to keep catfishing to a minimum by requiring everyone to commit to “honesty and integrity” and “being above reproach in our communications, including written, verbal, video and in person communications.” That’s a good idea, and one they themselves abide by on the site, where two helpful success stories have been published — both labeled “not a real endorsement.” 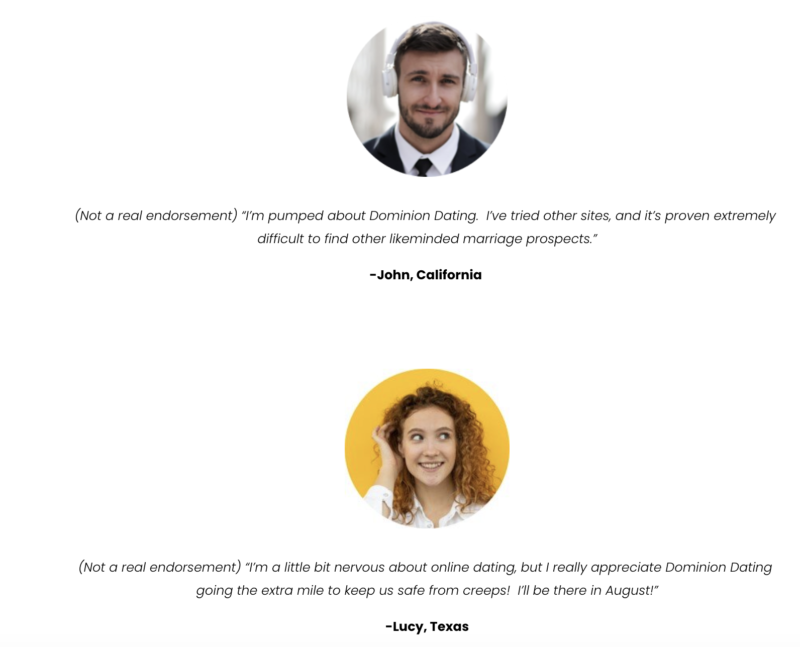 Well, hopefully those real endorsements will start trickling in after Dominion Dating gets its Kickstarter off the ground and testimonials pour in from men and the women who get their new husbands’ permission to write.

Look, dating is hard. Everyone has a lot of ideas about what it should look like – especially on the other side of a global pandemic that has left us all a little rusty regarding our social lives. Dating apps can be a great way to get back out there and there’s lots of helpful advice about how to do it with both wisdom and romance. Here’s some we posted just last week.

But if you’ve got to completely undermine the God-given humanity of women to do that, then you’re not actually standing up for “biblical principles.” Subjugating women has always been very much a thing, both within and outside of Christianity. You’re not bravely subverting cultural norms by telling women to know their place. You’re just taking part in a long, ugly tradition of patriarchy that would be boring if it wasn’t so deeply hurtful. If you truly want to stand out for Jesus on the dating scene, listen to and empower the women in your life with kindness, generosity and courage. That’s not just good dating advice. That’s good life advice too.

Biblical Servanthood Is Not What You Think