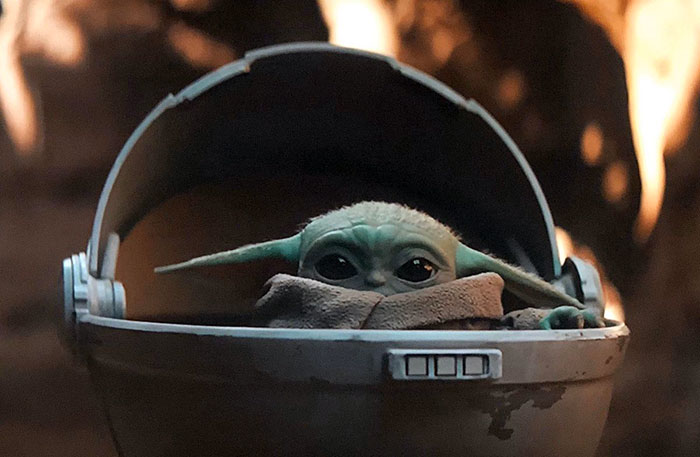 Disney pretty much corners the market on franchises. Everyone knows this but now, science backs it up. A global insights and strategy firm called NRG has conducted over 350,000 interviews over the last two years to discover which entertainment franchise we Americans consider the boldest, most inspiring and most thought-provoking. The results probably won’t surprise you, but the why‘s might.

“Consumers are ready for entertainment franchises to lean into important cultural conversations and create a new reality — one in which optimism, diversity and curiosity unite rather than divide us,” Jon Penn, CEO of NRG told Variety. In other words, the reason these franchises are the biggest isn’t just lots of money or handsome stars (although that surely doesn’t hurt). They tap into something deeper too.

That said, it’s kind of a weird mix.

The Mandalorian topped the list — the Star Wars universe’s first foray into non-Skywalker-centric storytelling has become a behemoth thanks to a certain diminutive co-star. In second place is The Avengers and the non-Disney entry Stranger Things rounds out the top three.

After that comes Keanu Reeves’ shoot-em-up series John Wick and then we get into Avengers offshoots like Black Panther and Guardians of the Galaxy. The Witcher and Ozark(?) are next, followed by Spider-Man: Into the Spiderverse and Black Widow rounds out the top ten.

The survey said that what sets these franchises apart from the rest of the riffraff is “boldness,” which is a little hard to define but apparently you know it when you see it. Franchises like Black Mirror, Hamilton and Black Panther were considered very bold by consumers.

There were some distinctions when you start accounting for age. Gen Z were more likely to cotton to franchises with lots of online meme-ability, meaning franchises like Spongebob and Shrek topped their lists. Black audiences chose franchises like Black Panther, Black-Ish, Insecure and Atlanta. Shows like Euphoria and Sex Education played better for young adults, while non-scripted shows featuring everyday people (Survivor and Shark Tank) performed better than their celebrity counterparts.

11 Stats That Will Change the Way You Think About Consumerism

Yes, George Clooney Cuts His Own Hair With a Flow-Bee