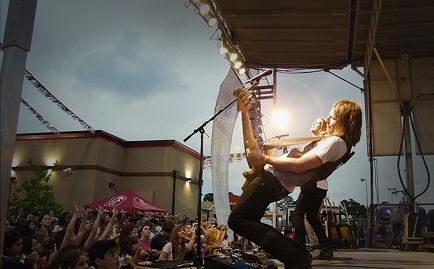 Needtobreathe has its feet in a lot of camps. On the one hand, they’re southern, roots-y rockers from small-town South Carolina who love the Black Crowes. On the other side, they’ve grown accustomed to hanging out in New York and LA with major label executives. They’ve been nominated (and won) several Dove awards … and they’ve had their songs featured on The Hills and in a commercial spot for Desperate Housewieves. They play sold-out shows to passionate fans; but they still get tons of attention because one of them (a pop star named Miley
Cyrus … heard of her?) tweeted about them.

The band’s status as people who don’t quite fit in led them to title their new record The Outsiders
(releasing today from Atlantic Records). "The title came from us feeling like on a lot of different levels, we are different and that’s a good thing," says Bear Rinehart, lead singer for the band. "For a long time,
we were trying to fit into something that we weren’t, and that’s a difficult thing. We became more and more comfortable over the years with those scenarios—we felt like ‘we’ve kind of made it now.’ That was some fake sense of worth. That really wasn’t what we were all about."

Rinehart recounts what helped to bring the band back around in time to record The Outsiders: "Something that pulled us back was that the songs on our last record that were the most important, and most important live times were those moments that were the most honest and real, that no one could have called. They were the moments only we could claim. That gave us a lot of confidence at the end of our tour and going into this record. We were really proud of the fact that we came full circle with that."

The result? Musically, the southern flare that put them on the map is still there, though it shares much more with the loose Americana of classic CCR than with the riff-driven Kings of Leon. The Outsiders is a
much bigger affair this time around, with layers of backing vocals, hand claps, harmonica, B3 organ and piano building on the sound of the last two albums. Former Nickel Creek violinist Sara Watkins steps in for guest vocals on “Stones,” a standout track focused on the brevity of life. Thematically, most of the 14 songs deal with life’s
struggles, in faith, in relationships, in the daily grind.

Needtobreathe is one of those rare bands that seems to find success in both the Contemporary Christian Music and the secular markets. But unlike other bands who have had to "crossover" from the CCM world to the secular
world, Needtobreathe did it backwards, first signing with Atlantic Records and only then releasing their music in the Christian market.

One advantage we had was we signed with Atlantic first—we passed on every Christian record deal that was in front of us," Bear says. "But the reason our music is available in the Christians market is because we wanted
it to be. When we were kids, Bo and I could only listen to Christian music cause we had pretty strict parents. It was cool for us to have good music to listen to. Really, on a very basic level, that’s why we made our music available in that [CCM] world: We felt like there were kids out there who wanted some good music to listen to and we hoped we could be a part of that. Most of our friends told us we were crazy for doing it at all; we didn’t need to do it, and the deal was done with Atlantic first. It was intentional for us and we felt like it was important."

Bear recounts the difficulty they had with the "Christian" label at the beginning of their career. "One thing we’ve had to come to terms with, as a band is that we need to play the same show, whether it’s at a club, or at a Christian festival the next day. We’ve figured out as a band there are certain things you can say from stage that will help you sell more CD’s. The difficult thing for us was coming to grips with who we are, and being consistent even if it means not all of the Christian audience ‘gets us.’ We played one festival between two worship bands, and most of the audience didn’t respond to us at all. But that’s OK, because there might have been 20 people out of a crowd of 2,000 that really understood what we do. But those are the ones who really become strong fans, and we’re able to communicate with them in a way those other bands weren’t able to."

Their more reluctant stance toward the Christian music industry hasn’t hurt Needtobreathe in that market. They won two Dove awards (the CCM equivalent of a Grammy) last year for their sophomore album, The Heat.
But Needtobreathe has gotten recognition in plenty of other areas than just the Chrisian market. They’ve had songs featured in films like P.S. I Love You, on TV shows like The Hills and Prison Break
and on ESPN’s NASCAR coverage and Fox’s World Series broadcasts. Bear laughs when asked about it, saying they only really got made fun of by friends when they had a song appear in a commercial for Desperate Housewives.

"Anything seems more fake when you’re a part of it. When you hear your song on a movie or a commercial, it all of a sudden seems cheaper. I try not to watch them anymore; we never watch movies or TV shows are songs are in. It’s a major letdown when you see them in there!"

But Needtobreathe has grown more comfortable with the attention it receives—even from the strangest places. They’ve discovered one of their most vocal fans is none other than Miley Cyrus, the reigning queen of all things tween and Disney. Cyrus tweeted several of the band’s lyrics and identified them as one of her favorites.

"It was hilarious," Bear says of the Miley tweets. "Of course, when it happened someone on the bus got sent a message about it and I was like ‘That can’t be true.’ And then someone else got it. I thought it was
hilarious. And of course she spelled the name wrong when she quoted it!"

The band is fine with Cyrus using Twitter to get their songs out and with pretty much any other way people might hear about their music. "These days it’s like any way you can get your music to people it’s a good tool," Bear says. "You never know what kind of stations people get in their town—I know radio sucks in a lot of places. Maybe TV is the best way to get new music and maybe that’s the only way. [We use] whatever avenue we can, and it’s been a pretty cool thing.

"[Now] if you come to a show and polled the audience and asked how they got there, there are like 47 different ways they found out about the band."