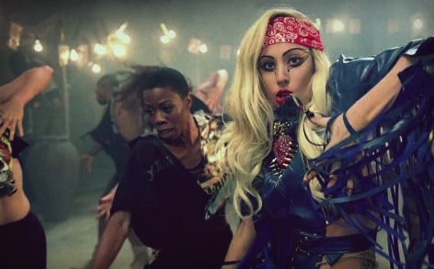 If you want the truth about a culture, don’t look to its politicians. Look to its artists.

And when it comes to Lady Gaga, it’s hard to not look.

As the current reigning queen of pop, Lady Gaga has garnered a name for herself by delivering chart-topping music, high-concept videos and eye-popping fashion. Judging by the anticipation for and unescapable promotion of her newly released album, Born This Way, this isn’t likely to change. But she’s more than just a spectacle. The fact she is so popular means there’s something about us, the American public, that has made her a musical monster. As controversial and outrageous as she is, we have to admit Gaga holds up a mirror and exposes truths about ourselves, for better or worse. As her “little monsters,” are we really cut from the same Kermit the Frog doll dress cloth?

We All Know the Fame Monster

Lady Gaga is all about visual appeal. What else would you expect from a woman who has worn meat “clothing” and hung herself execution-style on stage? But behind her outlandish outfits and stage persona is a secret to how Americans view themselves in light of the world and each other.

A pioneering spirit, the idea of “boldly going where no one has gone before” is uniquely American. Lady Gaga embodies this through her efforts to top not only her fellow pop musicians, but herself. This is what keeps the public interested. What strange getup will she don at the next awards show? What bizarre act will she commit on stage? Such questions generate her mystique and point to our culture’s desire to forge new frontiers, to one-up everyone else, to come out on top. It’s all about swimming away from the sea of conformity and embracing new ground.

While there’s nothing wrong with being a trailblazer, Gaga’s stunts also show how starved we can be for attention. There is a dark side to this desire to always be top dog. We can, in her words, be “so happy I could die,” running off distractions like cars on fuel, existing to pursue the next great thing. But we need more to our lives. Lady Gaga represents our culture’s desire to both embrace and break from the pointlessness of leaving our heads and hearts on the dance floor.

We Have Bad Romance

Gaga also shows how American culture views love and romance. Lady Gaga’s body of work is steeped in sensuality. She brags about her sexual knowledge and willingness to put it into practice.

Though I’m not defending her use of sexualized images, Gaga is borrowing from our culture’s voyeuristic obsessions and throwing it right back into our faces. Just as her “love songs” aren’t based on biblical standards, our culture doesn’t embrace a true love perspective either. Love and romance have given way to cheap thrills and sex. Any sense of mystery is gone. Lady Gaga pushing this to its limit reflects on our culture’s seemingly no-holds-barred approach to sex.

But just as a commitment-free lifestyle devoid of true love doesn’t end in romantic fulfillment, Gaga’s lyrical relationships go nowhere. She discusses relationships she knows aren’t beneficial, preferring to stay with men who are bad news (as in the controversial "Judas"). While Gaga exposes how sensually saturated American culture is, beneath the surface, she depicts the dilemma of trying to do what’s right, forsaking what isn’t good and healthy for us—no matter how appealing it seems. It’s as if this cultural icon is pointing out that Americans are consumed with chasing after pleasure—but that, deep down, we know it won’t satisfy us.

We Were Born This Way—But How Should We Live?

Lastly, you can’t deny Lady Gaga is the poster girl for individuality. Gaga certainly doesn’t support conformity and her appeal shows this. She believes each person is a unique creation, regardless of social background, racial heritage or even physical handicap. She asserts our differences as cause for celebration and encourages freedom to live our lives the way we were born to, echoing our culture’s focus on the individual rather than the group. Gaga relishes in being herself and in turn shows the rest of the world
how Americans aren’t and shouldn’t be afraid to be a little different. Unfortunately, she tries to justify questionable lifestyle choices with this argument. Gaga shows a darker side to our culture, one driven by ambitious competition and a sex-centered, "if-I-feel-it-then-it’s-OK" worldview. Plus, it’s pretty hard to take any of what she says when she talks about Born This Way ushering in a new race of hyper-tolerant people …

This part of Lady Gaga’s message isn’t entirely original. As special individuals made by God, it’s also scripturally sound to rejoice in our uniqueness. Our culture admires individuality and we should respect and view ourselves as Designer originals. It’s good to be leaders, to take risks and do something original with our lives. We’re all given a unique arsenal from God and need to deploy it to serve Him in the world. Though that "unique arsenal" likely doesn’t include a spiky face and being birthed out of an egg on national television.

Beneath her layers of steak skirts and wild wigs, Lady Gaga’s music and mystique mirrors elements we retain in our culture. They might not always be pretty, but they’re true.

REVIEW: The Colors of Hope