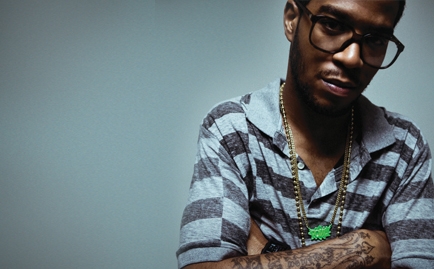 If
you’ve listened to the radio in the last decade, you know rap was the
toughest genre out there. While indie rock has sad sacks Bright Eyes
and Dashboard Confessional offering their plaintive cries of
relationship turmoil, Dr. Dre frequently threatened people with bodily
harm, 50 Cent survived bullet wounds and Wu-Tang Clan members ruled
album charts with grimy street tales. Hip-hop was where hardness
ruled—if you wanted soft feelings, you had to turn to its wimpier
cousin, R&B. R&B was “The End of the Road”—hip-hop was people
literally shooting each other over trans-coastal rap battles.

Well,
that was in the ’90s. In 2010? This is the year hip-hop went completely
(and sometimes excessively) emo. Kanye West said he’s “the abomination
of Obama nation.” Drake’s unexpected fame had him worried before he
ever had a debut album. B.o.B had a duet with the girl from Paramore.
And Kid Cudi’s song “Erase Me” is all unrequited love and angst (with a
healthy dash of self-loathing and inner doubt). His new album, Man on the Moon 2: The Legend of Mr. Rager
(out today), is filled with track after track of self-doubt, wondering
how he got to where he is and what the consequences of his
mistakes will be. In short, hip-hop seems to have thrown in the towel
on bluster and discovered that a little confessional poetry actually
makes people like you more. Or, at least, not terrified to meet you in
a dark alley.

Kanye
West started all of this—2008’s 808s & Heartbreaks reads like your
little brother’s 9th grade LiveJournal. But this year, West and
friends have taken it farther. His Twitter account is an odd mish-mash
of haute couture and intense personal reflection, including a
100ish-tweet apology to Taylor Swift that basically manages to both
blame himself and society for his actions. And it seems his new album
(due later this month) will be just as introspective: “Mama’s
Boyfriend” is a rumination on divorce that makes Everclear’s “Father of
Mine” seem surface-level by comparison. West has somehow redeemed
himself as someone who was just reeling from grief (and Hennessey) when
he made controversial comments to President George W. Bush and
interrupted Swift at last year’s VMAs. And he’s done it through
his own self-lacerating bile—no one will soon forget his performance of
“Runaway” at this year’s VMAs (and its chorus of “Let’s have a toast for the d—-bags”).

So
what does this mean? Is arrogant posturing in hip-hop over? Well, not
quite. Drake still finds time to brag about his wealth and sexual
prowess in between whining about being sad. Kid Cudi’s emotions are
likely to be just as affected by his constantly referenced drug use as
his secret Yellowcard obsession (we’re just guessing here). And Kanye
… well, he’s Kanye. There’s still plenty of misogyny, explicit
language, sexual come-ons, drug use and gun-toting violence to go
around in most rap music.

This
is also not to say the airwaves are suddenly clogged with too many
feelings—after all, the anthem of the summer was “All I Do Is Win,” and
that was basically an ode to having a lot of money to throw around.
Lil’ Wayne and Eminem, however talented they are from a technical
perspective, are incredibly offensive—their lyrics are filled with
violence, obscenity and hate speech for women, gay people and people
with disabilities. So don’t expect that pensive emotion has suddenly
seized control of the entire industry.

But
still, it’s good to see some honest emotion in hip-hop. It’s quite a
culture shift when artists feel like they can be honest about the doubt
they feel. For so long, we’ve all known the
trappings of most hip-hop songs (money, women and guns) were empty in
the end. It’s nice to hear that acknowledged from some of the genre’s
biggest stars.

Above all, it’s important that a genre often acclaimed for its gritty realism and honesty is giving the other
side of honesty a fair hearing. If Nas gains acclaim for telling honest
stories about growing up in the projects, and Ghostface Killah is
praised for authentically gritty tales of the drug trade, then why
can’t the new emo rappers be applauded for being honest about feeling
scared and sad? It might be a little overbearing from time to time
(again, have you heard
the chorus to “Runaway”?), but it’s good to hear a little vulnerability.
Though, if Kanye ever writes a song called “Rapping Infidelities,”
we’re going to be really suspicious.

This article originally appeared in RELEVANT.

What do you think of hip-hop’s emo trend? Are you a fan? Is it terrible? Is it all for show?

Your Story Must Be Told