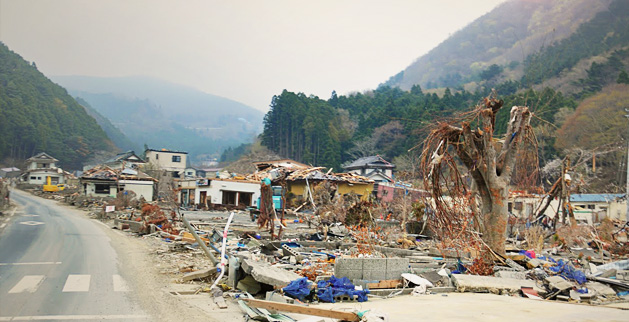 Eye contact is an unquestionable act—how could I? There I stood, in a pile of rubble, covered with mud and the things I carry—though they meant nothing to me—are the very treasures he’ll never get to see again. As I walk to the curb I pass him diligently, hoping he may disregard my presence, but no such luck. To the curb I stood, my back to the man, as I threw away the clothes, possessions, books and jewelry of his wife who just recently died. At the curb, where the trash meets the street, is also the very place where life meets death.

I never thought a missionary’s job title would ever include: demolition clean up and treasure hunter. For the first two days in the tsunami-stricken region, my team and I spent about 60-plus man hours flipping sheds, pulling cars, shoveling mud and, most importantly, preserving every artifact, picture and sentimental piece of nothing we could find. And as I stood in the room where the woman—whom I knew as nothing more than a face from the pictures I found—had her last breaths, a clock high on the wall that escaped the height of the tsunami still ticks, giving me a grim reminder that, for the rest of us, life still goes on.

She (the wife) died a Christian. And he (the husband) had his life spared for another day. Will he continue to live in disbelief of the Lord Jesus Christ? This is the very reason I believe God would work through such destruction. Not to judge but to give Japan a second chance.

Our vehicle rolls down a recently unburied road. The destruction was overwhelming; you could lose your sense of direction if not careful. Randomly we drove past buildings that managed to still stand. In front of one building stood 20 people or so rummaging through what at first seemed to be a pile of trash about the size of three cars, but it was actually a pile of shoes found throughout the community. All the shoes were now the new color mud black, but the people, they didn’t care about the color, they just wanted their life back.

Our task here was simple, head to the local rescue shelter to deliver two trucks full of supplies from Samaritan’s Purse and Food for the Hungry. The shelter housed 500, and there wasn’t a smile to be seen. The sights were like something out of a movie. Little four-by-four-foot bedrooms with cardboard box walls filled the entire gymnasium. For many, this was now home. Our work was done, we departed in short time, more teams would come in a few days, and the process will continue for God knows how long.

As we departed, in the vehicle, I looked back at a place I may never see again, and my eyes caught a glimpse of the best picture that was never taken. In a pile of mashed up society walks a boy in his lonesome, no more than 9 years old, carrying a bucket half his height with a shirt that in a place with no life is ever so bright. He was scavenging through what may have been his old house, picking up any toys he could find, but by the appearance of his bucket, there was nothing left. The best picture I’ve never taken was the moment, when life meets death.

The landscape looked the same as the places before. Wood piled on top of metal piled on top of everything piled on top of nothing. The scenes were of a war, minus the blood, but death still happened here. And again the scenery was a lifeless one. The only thing that kept me from thinking I, too, was dead was the wind blowing metal, making a “tinging” noise inside my head.

Though I now sit at home, the rubble still lies, and much work is to be done. I am sure money could help them some, but what is needed most is man power (from God-sent people) to restore these homes and, more importantly, renew their hearts. God has given a second chance; my prayer is that believers may answer according to His plans. Some referred to the water as the “waves of destruction” as they know not any mercy, but I will remind you the one who sent them does know mercy. May He reveal that mercy through us to them, in the very places where life meets death. Psychologists compared this event to being raped, warning Christians not to send empty words of love. They wanted to see it, feel it and they still might not believe it; even when I think back to that week, it feels almost as if it was all a dream. Maybe it’s in our dreams where we see that life meets death.

Nathan Eckman is a temporary missionary in the country of Japan. He has been rejected from almost every college he has applied to and in his free time enjoys training to become a combat search and rescue apprentice.

Tales of a 25-Year-Old Virgin

Get Free Coffee, Then Be Nice