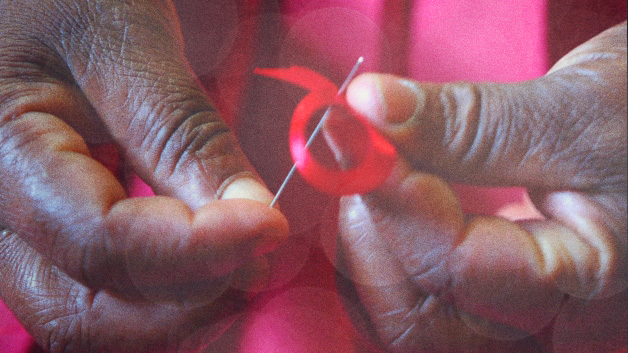 While the world’s attention has mostly turned to the AIDS epidemic in other parts of the world, cases of HIV and AIDS continue to rise among the African-American community in the South in the United States. In fact, of the top 10 states with the highest percentage of African-Americans who have AIDS, eight are in the South. Journalist Andrew J. Skerritt tells the story of some of the major players in the fight against AIDS, as well as the stories of those who’ve succumbed to the disease, in the South in his book, Ashamed to Die. In this excerpt, he describes leaving the hospital room of Carolyn Starr, a woman who led a troubled life and died of AIDS far too young, and he gives some background on this lesser known issue.

As I stepped inside the elevator, I saw a woman carrying what looked like a brand-new baby wrapped in pink, the color of the blanket and clothing suggesting she was taking home a daughter. I was immediately struck by the irony of what I had just witnessed, an unmistakable parallel of peril and promise: upstairs someone’s baby girl hovered near death, downstairs a smiling mother headed homeward with a newborn baby girl all dressed in pink. Could that joyful mother even imagine what it would be like to watch her daughter suffer and die of AIDS?

Unfortunately, too many southern mothers had confronted that question. Since the first cases of AIDS appeared in 1981, the epidemic had spread way beyond the gay and intravenous drug–using population. Women like Carolyn had become the poster children for HIV/AIDS.

Even as Carolyn lay dying that spring, throughout the states of the Old Confederacy doctors, activists, social workers, public health administrators, and people with HIV/AIDS had begun serious discussions in a belated attempt to slow the spread of the disease in the South. Within a year, representatives from South Carolina, North Carolina, Alabama, Georgia, Florida, Louisiana, Mississippi, and Kentucky issued the Southern States Manifesto to warn about the government inaction, ignorance, illness, and illicit sex that made the South the front line in the domestic war against AIDS.

The South is home to the highest number of adults and adolescents living with and dying from AIDS in the United States. That trend seemed to have totally ambushed the experts. With AIDS seemingly under control and the threat to heterosexual America apparently abated, the world’s focus shifted belatedly to the emerging pathological cyclone decimating the populations of sub-Saharan Africa—in Angola, Botswana, South Africa, and Kenya, thousands of children were being orphaned daily by the deadly virus.

Even as the world’s gaze was turned elsewhere, AIDS spread in the states of the Old Confederacy like kudzu growing along a country road. Between 2001 and 2005, the number of AIDS deaths decreased throughout the rest of the United States but continued to rise in the South. From 2000 to 2003, new AIDS cases jumped by 36.5 percent in the half-dozen states that make up the Deep South—Alabama, Georgia, Louisiana, Mississippi, and North and South Carolina. Florida, Georgia, Louisiana, South Carolina, and Tennessee suffered rates of AIDS cases higher than the national average in 2005.

“The South is home to the highest number of adults and adolescents living with and dying from AIDS in the United States.”

In 2005, half of all the funeral services conducted for people who died of AIDS were held in the South, in churches just like Starr’s white clapboard True Word of God Fire Baptized Holiness Church. This death ritual had become all too familiar.

The South was home to 36 percent of the US population but 40 percent of AIDS cases, according to the CDC. The region’s health care systems became increasingly overburdened as HIV/AIDS devastated vulnerable populations, especially poor black men and women. This region is dominated by small towns like Clover, “the town with love in the middle,” that are rife with pervasive poverty, lack of adequate health services, poor infrastructure, high unemployment and underemployment, and too many people who can’t afford health insurance. When you combine these factors with the severe lack of funding for HIV/AIDS care, it paints a dire picture for the South.

Even as other regions in America devised programs to stem the flow of AIDS, southerners remained bound by denial. A conspiracy of hypocrisy, shame, false morality, cowardice, and political opportunism conspired to keep AIDS, “God’s curse on homosexuals,” off the public policy list of priorities.

Nowhere was this story more evident than in Starr’s home town, where the Clover Community Cemetery, the town’s black burial ground, is littered with the headstones of dozens of black men and women who died too soon from AIDS. Carolyn would be spared the indignity of joining them. A grave was reserved for her in a family plot several miles away.

Even as America has dispatched billions to fight this disease overseas, our small rural communities remain vulnerable to the sinister threat of HIV/AIDS. The enemy isn’t just the physical illness. It’s ignorance; it’s the guilt and shame-inducing silence that kills our young. It’s time to end the silence and to provoke an eruption of empathy, compassion, and community action to alter the sad trajectory of AIDS in our small towns.

HIV/AIDS remains a significant public health and social justice crisis in the United States, and the South in particular is heavily burdened, warned the authors of the Southern States Manifesto. Poverty, poor education, and limited community resources conspire against people who live in the rural South. Through initiatives such as Southern REACH, the National AIDS Fund pledged to provide program grants to “strategically positioned” community-based organizations that have demonstrated the ability to reach priority populations with HIV prevention and care services or to lead policy and advocacy efforts.

“HIV/AIDS is more than a disease—it is a symptom of the larger problems of social inequalities and racial/ethnic health disparities,” said Kandy Ferree, National AIDS Fund president and CEO, in a prepared statement. “Nowhere are such issues more prevalent in the US than in the South.”

Excerpted from Ashamed to Die: Silence, Denial, and the AIDS Epidemic in the South by Andrew J. Skerritt with permission from Lawrence Hill Books, an imprint of Chicago Review Press.

Merry Christmas! (And See You Soon)