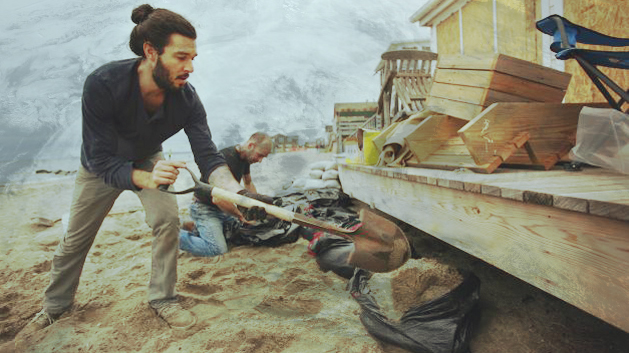 By now, you’ve seen the aftermath of Hurricane Sandy’s wake from the Caribbean to the North Atlantic Coast—leaving millions of people without power, evacuated from their homes and stranded without access to food, water and medicine.

Apartment walls in New York City have been ripped off of buildings. Entire roller coasters have been swept out to sea on the coast of New Jersey. Subways, homes and highways are underwater.

The wreckage is devastating, the multitude of people affected is overwhelming, and if there’s ever been a time to drop everything and serve, it’s now.

It’s heartening to see those who have already rolled up their sleeves, particularly in the Church—who is responding to this crisis through the opportunity to feed the hungry, shelter the displaced and provide comfort to those affected. The United Methodist Church is asking congregants to assemble “flood buckets”—filled with cleaning supplies and basic essentials for those stuck in no-power zones. Hope for New York, a partnership connecting local churches, is mobilizing volunteers to help clean up flooded buildings and go door to door in apartments with power outages to connect with those in need. And in Haitit, where flooding and unsanitary condictions have led to a cholera outbreak, the disaster response team of the Evangelical Lutheran Church in America (ELCA) is sending medical doctors and supplies.

Whether you live in an affected area or elsewhere, here are five simple ways you can help in the disaster response efforts.

Sound wildly inappropriate? Well, this is a party with a purpose. Pull out your no-fail recipe for dinner. If you have the ingredients on hand–all the better. Now quick, go to your contact list and start sending out invites requesting an immediate reply.

Call it your “Disaster Relief Dinner Party.” It’s tonight. And while the entrée is gratis, you’re going to auction off dessert with all proceeds going to the American Red Cross, World Vision, Samaritan’s Purse, Convoy of Hope or another organization. You don’t have time to make the dessert, so go buy it—and go fancy. You do, however, have time to pray. Pray as you’re readying for your guests, and lead a time of prayer together during your party.

There are several ways you can text to donate now, but also plan for the future. Be it the calendar on your wall or the handy-dandy calendar on your iPhone, get it out and save the date to donate. Choose a day to make donations in about one month, two months and six months designated specifically for Hurricane Sandy–the needs for victims will not go away no matter what other disaster comes along after it. You have given all you can right now, right? Right?

But most disaster response organizations will tell you that today’s disaster becomes yesterday’s long-dead Twitter feed shockingly fast. So decide what you’re going to give and when you’re going to give it, and stick to it. Try to set up the donation in advance through online banking so you don’t have to remember to do it.

No, don’t head into a disaster zone untrained—and quite frankly, unwanted—because vigilante volunteers do little but endanger themselves and others.

But do let yourself get caught up in the emotion of the moment and make a decision that in the weeks ahead, you will contact a disaster response agency to volunteer or enrol in their emergency response training through agencies like the Community Emergency Response Teams. Sign up to be a Convoy of Hope volunteer , whose local teams will contact you when they have a need, or if you’re in an affected area, join up with a local church and lend a hand to the clean-up. If you live in New York, check with Hope for New York’s updated feed with addresses and instructions on where and how to help relief efforts.

If you have made a donation, encourage others to do so via social media, email or any other outlet available to you. Share links and issue challenges and set goals. Ask people to donate in lieu of a Christmas gift this year or challenge co-workers to pledge their Christmas bonus.

Offer up fun and humbling incentives. Maybe for donations of $100 or more, you can offer to shovel their driveway on a Saturday of their choosing in January or maybe you could write them a flattering limerick. Most people will decline your offer (sigh of relief) but it might make someone donate just to watch you sweat. The point is to cut through the media noise that comes along with an event of this magnitude and make the appeal personal.

5) Ask God What You Should Give—and Commit

Many of use decide to give based on what we think we can afford. But since we are not omniscient or omnipresent and therefore don’t know what the future holds, why not look to God to tell you how much you can give, instead of your bank account? Ask Him honestly where and what you can give—whether your time, money or efforts. Then be obedient and give fearlessly.

Shannon Sutherland Smith is a writer, editor and columnist based in Alberta, Canada. She works for several metropolitan daily newspapers as well as magazines and NGOs with a special focus on social justice issues. Shannon is also a mother of five working to raise the next generation of anti-apathetic Christ followers.

In Sandy’s Wake, Staten Island is “The Forgotten Borough”