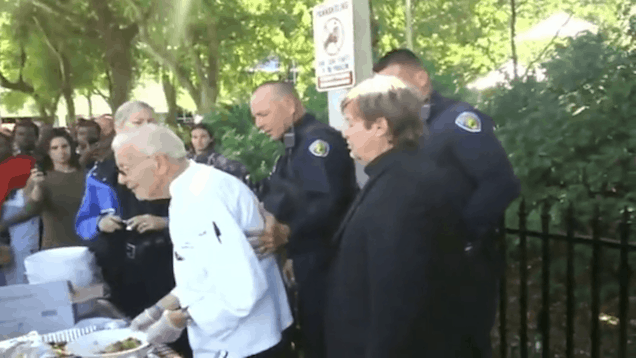 Arnold Abbott is a 90-year-old resident of Fort Lauderdale, Florida, and he is too good for this world. He and two pastors were arrested this week for defying a new city ordinance that “effectively outlaws” giving food to homeless people in public places, because what even is this world anymore. For this crime, they face $500 fines and up to 60 days in jail.

“One of police officers came over and said ‘Drop that plate right now,’ as if I was carrying a weapon,” Abbott said. Also charged was a minister from Coral Springs and Sanctuary Church pastor, Wayne Black. “We believe very strongly that Jesus taught us that we are to feed his sheep,” said Pastor Black.

When the law was passed last week, Fort Lauderdale Mayor Jack Seiler issued a strong warning to any deviants who would think to continue to be kind and decent to their fellow man, telling reporters that “Just because of media attention we don’t stop enforcing the law …We enforce the laws here in Fort Lauderdale.”

This is actually not the first time Abbott has fought for his right to feed the hungry. He won a lawsuit against the city in 1999 when they told him he couldn’t feed people at the beach …

A Wes Anderson Theme Park Is a Real Possibility

Now This Is Just a Great Letter to the Editor