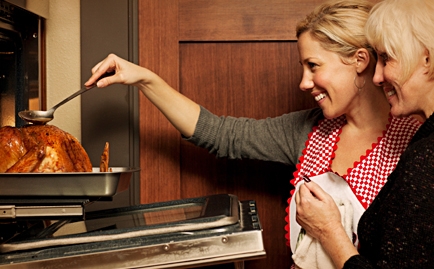 For Thanksgiving, we asked some writers to reflect on the holiday, and the nature of thanksgiving and thankfulness. These stories originally appeared last year, but we liked them so much, it seemed wrong to not share them again. After you read their reflections, we’d love for you to share your own stories in the comments. What are you thankful for this year? What does Thanksgiving mean to you?

Last winter, Portland, Oregon was crippled for a week by snowstorms it didn’t have the money, equipment or personnel to deal with. In the summer, the city came within a degree of breaking its all-time high temperature. I gave thanks on those rare days when it was 75 degrees, rainy in the morning and sunny in the afternoon, with the wind always at my back. It’s only in hindsight that I see that every day was a gift.

One of the best books I read this year was Kathleen Norris’s Acedia & Me. In addition to being an exploration of acedia—meaning “absence of care”—this moving book recalls Norris’ marriage to the poet David Dwyer, his struggles with mental illness and his untimely death.

Norris remembers walking to visit her husband in a psychiatric ward on a day when it was so frigid that it hurt to breathe. As she cursed the cold and icy pavement under her feet, she recalled some words from that Sunday’s liturgy.

Norris wrote, “The words were now a part of me, and when I most needed them, the rhythms of my walking had stirred them up, to erode my anxiety and self-pity and remind me that blessings may be found in all things.”

John Pattison is the Deputy Editor of the Burnside Writers Collective. John will practice finding blessings in all things as he spends the next year traveling around the country with his wife and two year-old daughter.

Thank God for my limitations. Not limitations in general, just mine. I tend toward grandiosity and self-importance, so thank God my imperfections show up everywhere. For example, my writing is OK, but I’m disabled when it comes to drawing. I have trouble with things like circles and straight lines. If I could write and draw, I’d be an insufferable ar-teest. I’d run around pontificating about creativity and art all the time. I also have a short temper. I calm down and see reason pretty fast, but that doesn’t help if I’ve alienated someone in three seconds. I’m smart, but I get distracted too easily and miss important details. Without all my flaws, I’d feel a little too smart and a little too cool. My dependence on God and on others wouldn’t be so obvious.   I’m more thankful for the gifts of others than my own. I get by on the strengths of the people around me. My friends Mark and Ryan keep my impulsivity in check with their patience and self-restraint. My wife’s attention to detail catches important things that I miss. People like these help me get through life without wreaking havoc and devastation.   Once in a while, I pull my head out of my behind and realize my gifts help other people. That’s when I enjoy them most. I use my gifts for me most of the time, but sometimes I remember God gives us gifts and limitations so we can carry each other. The temptation to stand alone is usually fleeting, vanishing in the wind of our weakness. So, yeah, I’m thankful for the many gifts God has given me. I’m just more thankful for the limitations that keep me from spoiling them.

Stephen W. Simpson is a psychologist, writer and professor at Fuller Theological Seminary. He is the author of Assaulted by Joy: The Redemption of a Cynic (Zondervan) and What Women Wish You Knew about Dating (Baker Books).

“Women love us for our defects. If we have enough of them, they will forgive us everything, even our intellects.”  — Oscar Wilde, The Picture of Dorian Gray

I’m not entirely sure what being thankful means all the time, but like most people, I’m thankful for any number of things each day—that Coke Zero has more caffeine than most full calorie sodas, that I can watch daily Soul Train reruns on DirecTV, the Sparklemotion soccer team—but as Thanksgiving comes up every year, I’d be stupid if I didn’t count my lucky stars thinking of my wife. Sure, I’m appreciative of the sort of things that first world types like myself should probably think more about—access to regular meals, a roof over my head, etc.—but instead of thanking my roof and other inanimate objects, I need to do a far better job expressing my gratitude to actual people, especially the ones who have to deal with my idiosyncrasies and occasional acts of straight-up idiocy every day. I’m only mildly frustrating (I hope) to those who deal with me in small bursts, but I’m not entirely sure how my wife keeps from smothering me with a pillow while I sleep. Still, it’s not enough to just be a thankfulness machine in empty praise and claims of indebtedness, maybe I could be thankful by being less of a regular irritant. Tonight, I’m heading home from work and taking the recycles out right away before being asked and trying to replace the garbage disposal without grumbling. It’s not much, but it’s a start, right?

Dan Gibson is the manager of the Sparklemotion amateur soccer team, a music editor, and a writer living in Tucson, AZ.

A few years ago I attended a women’s business etiquette seminar where the differences between gender communication were discussed.

The lecturer revealed that in business settings, women say “thank you” nearly twice as often as men. But we were not commended for this accomplishment; we were chastised. Most of the time, women didn’t say “thank you” because they were genuinely thankful for something. They sometimes said it because it filled an awkward silence, because they didn’t know what else to say, because it was a convenient segue, or because it provided closure to a conversation. They rarely said it because they were actually thankful.

We were warned that when you say “thank you” without cause, it’s actually detrimental to you because it makes you seem disingenuous and inarticulate.

At first I was offended at the stereotype. Certainly not all women were guilty of this faux pas, I thought. And then I went back to work and realized maybe all women didn’t fit the stereotype, but I sure did. I said “thank you” at the beginning of meetings, in the middle of conversations, and at the end of e-mails for no particular reason. It just sounded good.

The other day I read Psalm 22:3, which says that God inhabits the praises of His people, and I thought about this in light of the communications seminar. I think a lot of Christians behave toward God like women behave toward their business associates.

In our prayers and in our praise songs, we say “thank you” to Him because we think it’s the right thing to say, not because we mean it. We say it to sound better than we are, to fill an awkward silence, to segue to another part of the Sunday morning service.

God inhabits praise. He cannot reside in a two-dimensional movie set that’s a façade of a house. He wants to abide with us in an authentic dwelling place where our hearts honestly, sincerely thank Him.

Sarah Thebarge studied medicine at Yale and journalism at Columbia. She currently lives and practices medicine in Portland, Oregon.

If you were a prehistoric Aleut and your wife or husband died, your people braced your joints for grief. That is, they lashed hide bindings around your knees, ankles, elbows, shoulders, and hips … Otherwise, the Aleuts said, in your grief you would go to pieces …

When Tim and Jenni Day joined Trinity Church three months ago, they were lashed to the Marshall’s small group. Lashed—that was the word Mrs. Marshall used.

Due to blizzard conditions on I-70, Tim and Jenni found themselves sandwiched between 10-year-old Jill Marshall and her twin brother, Randy. Suddenly the children grabbed their hands and sang:

We thank You for our food, Lord/And all the things You do, Lord.

We thank You for our food, Lord/And all our family. Doo-doo-doo-doo (snap, snap)

The Addams Family Thanksgiving Prayer, really? Jenni got tickled and started cry-laughing. The patriarch grinned. “Isn’t that fun? Randy was watching an episode the other night and just came up with it.”

The doorbell rang just as Mrs. Marshall remembered the crescent rolls in the oven. After their parents left the room, Jill whispered to Jenni: I wish you were my mother.

Little did any of the Marshalls know that Jenni had miscarried two weeks ago. Tim and Jenni might share their anguish with the small group in time, but not yet. This year, Thanksgiving hurt. But a little girl’s words seemed to brace Jenni for the day, keep her from falling apart.

John Blase edits the books of others by day and writes his own by night, sorta like Batman. His most recent book, Touching Wonder: Recapturing the Awe of Christmas, was released in Sept. 2009 from David C. Cook Publishing.