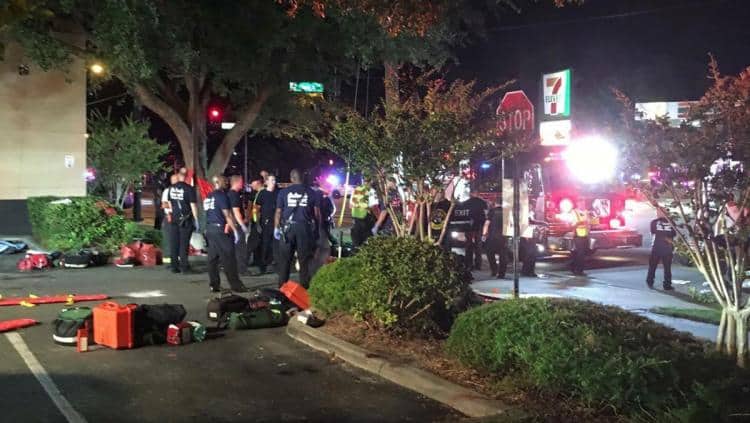 Editor’s Note: This post is being updated periodically as new information is made available.

In the shock of this morning’s mass shooting in Orlando, Florida—that left 49 people dead and more than 53 injured at a local gay club—a ton of people are asking what they can do. In the next few days, there will be clearer outlets and initiatives for you to engage in.

City officials have created an online form that anyone interested in volunteering can fill out.

We’ll do our best to keep you informed. Until we know more, here’s how you can help victims of the Orlando shooting right now:

When tragedies like this happen, first-response and relief organizations need all the resources they can get.

You can donate to the Central Florida chapter of the American Red Cross here. In addition, Equality Florida, and LGBT group, has set up a GoFundMe to support the victims and their families.

Local church Celebration Orlando has also launched a donation campaign to help those affected by the tragedy. In an Instagram post, they explained. You can text “HelpOrlando” and the amount you would like to donate to (407) 477-4745 to help those who are in need here in Orlando.” They have more information at CelebrationORL.org.

As we told you earlier, hundreds of donors have showed up to blood banks in Orlando following the horrific shooting. Thanks to a massive turnout to help, One Blood said that the centers are currently at capacity. But, officials reiterated, donors should return in the coming days.

A spokesperson for the group told the Orlando Sentinel, “I’ve been here 13 years and never seen a response like this.” Michaels said that their supplies will soon need to be replenished as hundreds seeks to help victims of the shooting.

In Orlando, here’s where you can go:

If you’re outside Orlando, call 1-888-936-6283 or visit the One Blood website for information about where you can make your donation. Around the country, the American Red Cross is a great place to donate blood.

If you have a family member who you fear may have been involved in the shooting, you can call Orlando’s crisis hotline at (407) 246-4357. Right now, the hotline is dedicated to those looking for family members who might be victims.

City officials in Orlando have posted the names and ages of the victims they’ve identified.

It’s easy for some to write off prayer as actionless words in the face of tragedy. But for Christians, prayer couldn’t be farther from inaction. And so in the face of this shooting, Christians need to pray: pray for the victims who are now fighting for their lives in hospitals. Pray for families and friends who lost someone last night. Pray for the City of Orlando and its law enforcement officials and first responders. And pray for the Church, that in Orlando and around the country Christians will be those first to speak words of care and reach out in compassion to those affected.

Churches around the country will doubtless be holding prayer services in the coming days. Usually, it’s best to check the social media accounts of churches in your area to find out. In Orlando, several churches are gathering tonight and later in the week. If you’re looking to participate, here are times and locations:

We will continue to update this post as we get information about more prayer services.

Mourn With Those Who Mourn