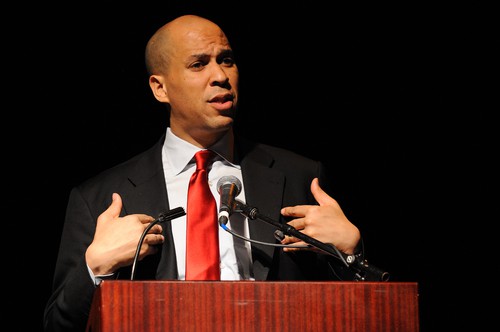 New Jersey Senator Cory Booker has officially thrown his hat into the ring as a 2020 contender for the White House. He did so in style, with a markedly creative video that detailed his bonafides, talking about the racism his family faced and the people who helped him get where he is today.

Booker has a long history of being vocal about his faith. He was raised in an African Methodist Episcopal church and today attends a Metropolitan Baptist Church in Newark, according to a profile over at Religion News. Booker has worked with Reverend William Barber II and spoke at the Festival of Homiletics, a preaching conference.  He invokes Bible verses and Christian themes with a lot of natural ease and certainly gives off the impression of having a real, devoted spiritual life instead of just a collection of politically expedient Christian-y quotes. He even attends a Bible study with his fellow politicians from both sides of the aisle, including Republican Senator Bob Thune and New York Senator Kirsten Gillibrand.

On the eve of Friday’s big campaign rollout, Booker attended an “intimate prayer service” with a small group of friends and supporters where his pastor anointed him. “We know it is not power nor might but by spirit, sayeth the Lord,” Booker’s pastor can be heard saying in a video tweeted by Atlantic staff writer Edward-Isaac Dovere. “Stir his spirit that he might walk in your way.”

Video of Cory Booker being anointed, literally, by his reverend last night – inside the “intimate prayer service” held for a small group of friends and supporters late last night, before going public with his announcement. Read more here: https://t.co/18xs91u5Ji pic.twitter.com/V2BFv3YL9x

“I just feel this sense of blessed,” Booker told Dovere after the service. “A quiet confidence about the road ahead, every risk I’ve taken, every leap into the unknown, God’s always blessed me with people who are there, who are here, who’ve allowed me to be used for something much larger than myself.”

Booker is not without his critics. He’s fielded accusations of hypocrisy for accepting Wall Street money while expressing disdain for super PACs, and took some heat for voting against a bill that would have made prescription drugs more affordable. When a similar bill later came up, he pivoted and voted for it.

But that’s what a primary is for — to sort out who these people are, get a better understanding of their record and ultimately make a choice about whether they deserve your vote. Booker’s politics may not be your bag but he seems poised to bring the growing religious left into the spotlight.