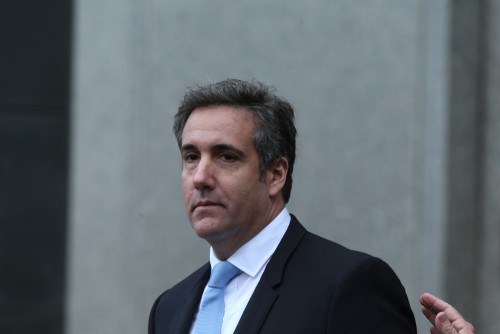 A bonkers report out of the Wall Street Journal this morning alleges that President Donald Trump’s one-time lawyer-turned-bitter foe Michael Cohen hired an IT firm to put its thumb on the scales of several online polls to give his boss a little extra boost in the 2016 election. That firm is RedFinch Solutions, run by John Gauger, who also serves as the Chief Information Officer for Liberty University. Liberty is one of the largest private Christian colleges in the United States and is run by Jerry Falwell Jr., a close Trump supporter and the first major evangelical leader to publicly support the President. Gauger was reportedly asked to boost polls hosted on places like CNBC and the Drudge Report.

Gauger’s work was not overly successful, as the scripts he created to automatically vote for Trump in a CNBC poll failed to get him into the top 100 candidates.Gauger’s work for the Drudge Report was a little more successful, as he was able to get Trump to fifth place in a poll about potential Republican candidates.

Perhaps that explains the bizarre details around Gauger’s payment. According to the Wall Street Journal, Gauger had agreed to do the work for $50,000. But Cohen paid Gauger in “a blue Walmart bag containing between $12,000 and $13,000 in cash and, randomly, a boxing glove that Mr. Cohen said had been worn by a Brazilian mixed-martial-arts fighter.”

And that might not even be the wildest detail. The report also says Cohen asked Gauger to create a @WomenForCohen Twitter account to promote his media appearances and brand him as a “sex symbol.” That doesn’t appear to have been a huge success either.

Cohen is currently serving three years in prison for lying to Congress and campaign finance violations. Gauger himself tipped the Wall Street Journal off to the poll rigging story, apparently still smarting from the fact that all he saw for his troubles was $12,000 and a boxing glove.

Cohen confirmed the report to CNN but claimed he only did it at Trump’s behest, saying “What I did was at the direction of and for the sole benefit of Donald J. Trump. I truly regret my blind loyalty to a man who doesn’t deserve it.”