In pandemic language, the word ‘hotspot’ indicates cities and communities where the disease is hitting particularly hard. This was useful in the early days of COVID-19’s spread in the U.S., when cities like New York City and San Francisco were grappling with the opening volleys of what would become a nationwide crisis. For the most part, Americans reacted appropriately, self-isolating, social distancing and masking up in an attempt to “flatten the curve” and give frontline workers some margin to contain the spread until a vaccine could be distributed. It wasn’t fun but it worked.

But something very human happened between the early days of March and now: We got bored. There were, to be fair, many other important things vying for our attention. A long summer of marches for justice against racist police brutality. A historic election. And the completely understandable desire to be around the people we care about. These utterly valid issues pulled us out of our homes and what had been a fastidious system of social isolation devolved into more of a token hat tip to cleanliness.

To put it simply: America got sloppy. Not all of us, but enough of us. And now there are no ‘hotspots.” Or rather, there’s just one big one that stretches across nearly the whole country.

Here’s the latest data from Kaiser Health News, a nonprofit that reports on health news. As of this writing, 48 of the 50 states are classified as hotspots, with over 10 million total cases resulting in over 240,000 deaths — and climbing all the time. 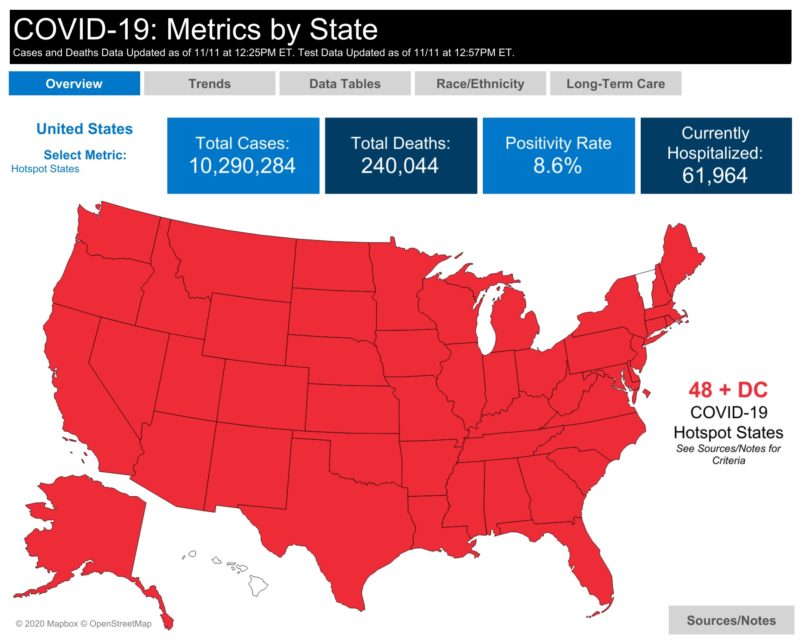 The first step in solving a problem is admitting there is one and right now, there is a big one. Many, many states have either abandoned any mandated lockdowns altogether or are attempting to re-open even as the novel coronavirus surges in their communities.

The burden of responsibly here isn’t entirely on the American citizens. The federal government’s catastrophic failure to contain the pandemic and provide for families and businesses left many people with no choice but to go back to work. The viral spread of misinformation caused many to take the threat of COVID-19 far less seriously than they should and, in some cases, to deny its existence altogether.

But if our current political parties are going to be too busy haggling over claims of non-existent widespread voter fraud to turn the tide back around, we will have to take it upon ourselves to do so.

This is particularly true of Christians, which have been instructed by God to consider others’ needs ahead of our own. Across the country, some prominent Christian leaders have taken it upon themselves to advocate for churches to ignore social distancing guidelines and defy state mandates that would prohibit meeting indoors.

That’s exactly the opposite of what the Church’s attitude should be. The call to socially distance is a call to love your neighbor as yourself. COVID-19 is particularly dangerous for the elderly, and is proving deadly to Black and Brown Americans at much, much higher rates than it is for white people. Any declaration that Christians should be willing to take their chances with COVID is also saying, by implication, that members of these historically marginalized communities are worth the risk.

But they aren’t. Nobody is. And when others say that old people or other vulnerable communities may have to be sacrificed so that the rest of us can get back to normal, the Church must plant its feet and shout no. No, no, no, as far as it depends on the Church, not one person will be sacrificed to the idol of “normalcy.” We must find a way to provide for families and communities financially affected by the pandemic, but it cannot involve using vulnerable communities as human shields. That is simply not an option.

COVID-19 can be beat. There is encouraging news on the horizon for a vaccine. But until then, we must recognize the state of our nation for what it is and re-commit ourselves to social distancing, wearing masks and protecting those who need it most. The lives we save very likely won’t be our own.

The Importance of Spiritual Dry Seasons

Dr. Robert Jeffress Admitted that Joe Biden Won the Election — Or Did He?