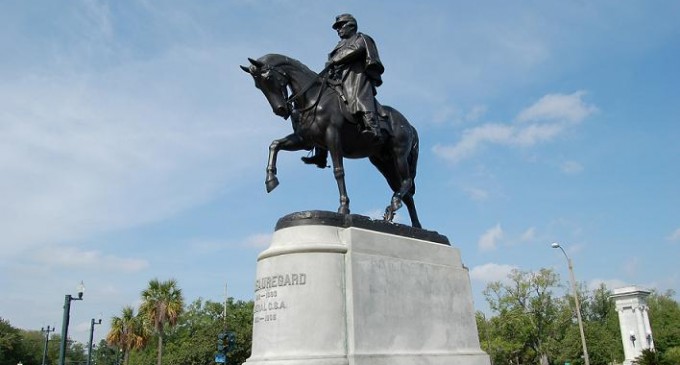 As part of the city’s ongoing quest to rid its facade of Confederate-honoring statues and monuments, New Orleans removed another statue at about 3 a.m. today. This time, it’s a statue of Confederate General P.G.T. Beauregard that stood near the entrance of City Park. Two days before, the Louisiana legislature took steps to make similar removals more difficult.

The Beauregard monument is the third of four historical monuments the New Orleans’ City Council voted (in 2015) to remove. Like the first two removals, a moderate crowd—reportedly consisting of about half and half supporters and opponents—gathered this morning to watch. Last month, a monument honoring the Crescent City White League came down, and a statue of Confederate President Jefferson Davis fell on May 11. The last statue, one of Confederate General Robert E. Lee, is the next to go, but officials aren’t announcing the date.

On Monday of this week, the city’s mayor, Mitch Landrieu, published an op-ed in The Washington Post, defending New Orleans’ actions. He said: “If we don’t want to be forever held back by our crushing history of institutional racism, it’s time to relegate these monuments to their proper place.”

At the same time—literally, on Monday—lawmakers in the Louisiana House of Representatives passed a “measure” that could make it more difficult for cities in the state to remove Confederate monuments. If it becomes a bill, it would require local governments to hold referendums before taking actions like New Orleans.

Is This Aaron Rodgers Hanging Out With Rob Bell, Reading His New Book?

This Is Why You Shouldn’t Trust the Government