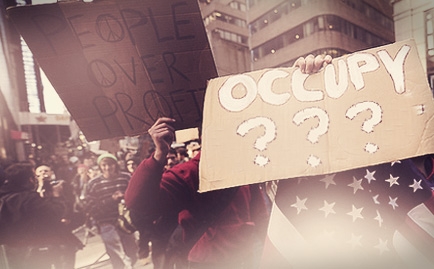 What exactly is the purpose of Occupy Wall Street? Apart from a vague sense of it being the liberal progressives’ counterpart to the TeaParty, and a coalition of unionists, anti-capitalists and mad-as-helltwentysomethings angry about the rising cost of Netflix and Facebook’sinfuriating shape-shifting, it’s sort of unclear.

As a “movement,” Occupy Wall Street doesn’t reveal an organizedgrassroots agenda as much as it represents a general climate of anger,frustration and antagonism against the “haves”—a suspiciously narrow(1 percent), heartless, no good very bad group whose entrepreneurial and capitalistic success apparently oppress the 99 percent of us have-nots whoare being unfairly kept from sharing in the 1 percent’s riches.

Mostly, though, Occupy Wall Street represents the natural discontentof an entitled generation raised on the notion that we deserve things,that the government owes us something, that everything we want should be accessible and that somehow we are not responsible if we don’t end upquite as successful in life as we’d hoped. It’s a blame-shiftingproblem. It’s an inability to delay gratification or go without thatwhich we believe is our right or destiny. And it’s a problem both on the micro/individual and macro/government level.

I like Bruce Wydick’s perspective on it for Christianity Today:

Like most protests, the Occupy Wall Street folks arebetter at identifying something that is wrong than identifying a wayforward that is right. But even if the protesters don’t understand muchabout financial economics, they have a clear sense that something iswrong. That something, however, lies deeper than the behavior of arelative handful of Wall Street moguls. That something, I believe, is asense of material entitlement that has crept into the American psyche.This sense of material entitlement has infected our personal choices,our politics and our financial system.

Wydick places the blame not on one entity but on the spirit ofentitlement that pervades both individual Americans and our governmentinstitutions. In his assessment of the side effects of the spirit ofentitlement, he includes the ubiquity of debt, the real estate crash anduncontrolled government spending. “Our financial crisis is a crisis inAmerican values for which we all share blame,” he writes.

The thing is, “sharing blame” is hard for us humans to do. We’reinfinitely averse to admitting our own culpability. In almost anything.Whether it be our own financial hardships, or those of our communities,or the high taxes under which we suffer. … We have to lash out againstsomeone. We have to go occupy something.

As Christians, though, I think we must first and foremost look within for the blame. We must own our share in the mess. Beyond institutionsand hegemonies and Wall Street tycoons, how are we responsiblefor the trouble we’re in? True revolution begins here. True changebegins with what we can actually control: our own lives, an awareness of our weaknesses and potentials, and a commitment to working to improve.

If we have to occupy something, let it be the dominion of our ownculpable Self, the guiltiest of all institutions and the one we arelikeliest to spur toward positive change.

Read other thoughts on Occupy Wall Street: What can we learn from the movement’s demands for accountability?