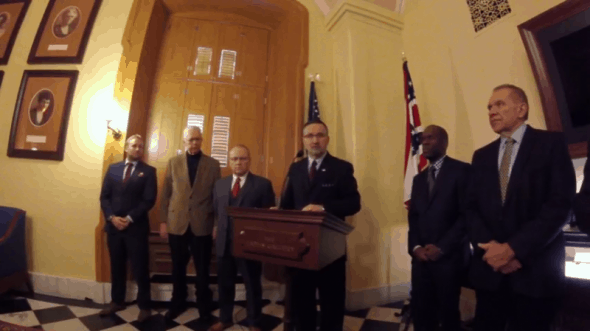 Pastors from more than 2,500 churches in Ohio have joined together to ask state legislators to override Governor John Kasich’s veto of the so-called “heartbeat bill.”

Kasich vetoed the highly controversial bill on Tuesday and instead signed one prohibiting abortions beyond 20 weeks of pregnancy.

J.C. Church, the senior pastor of Victory in Truth Ministries, spoke at the meeting, saying:

“We represent no less than 2,500 churches in the state of Ohio, over tens of thousands of votes and people in this state who care deeply about this issue. … We would like to make a declaration and to challenge our legislators that we’re going to stand with you. We’re here, we’re growing and we’re not going anywhere. We’re asking the Speaker of the House to call for a vote to override this decision that the governor has made, because we’re here to promote and advocate for life.”

The bill would need three-fifths agreement in both houses of the State Congress in order to override it, so lobbyists would need to change the minds of a few legislators and it would need to happen before the Christmas holiday during the “lame-duck period.”

On Thursday, conservative anti-abortion groups held a public news conference at the Statehouse to condemn Kasich’s decision and continue to call for the heartbeat bill.

Shortly after, NARAL and other pro-choice groups joined the Statehouse to protest Kasich’s signing of the 20-week ban bill.

This Can Be the Year You Finally Take the Leap