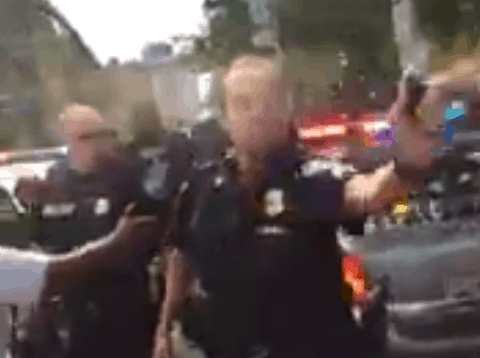 A grainy video captured on a cell phone (warning, it contains strong language) shows a police officer spraying a crowd of people outside of a Black Lives Matter conference at Cleveland State University. The conference, which was a gathering of activists and speakers, had just let out when a confrontation arose between several officers and people in the crowd over the detainment of a teenager. Police said the 14-year-old was taken off of a bus and put into the police the car because he was intoxicated. At some point, a crowd gathered seeking answers about why the teen had been placed into custody. Moments later, the officer began to use pepper spray on the crowd. The teen was later released to his mother.

The conference hosted “The Cleveland 8,” a group of eight local activists who went straight to a judge following the shooting of 12-year-old Tamir Rice by a white police officer, instead of just waiting for a local grand jury decision. Following the pepper spray incident, history professor and Cleveland 8 member Rhonda Y. Williams told USA Today, “A moment where de-escalation should’ve taken place instead escalation happened. This is a classic example of why the DOJ had to come in and investigate and why we have a consent decree and why we need community voice and input.” Police say they are investigating the incident.

NASA Has Released an Incredible Image of the ‘Sombrero Galaxy’