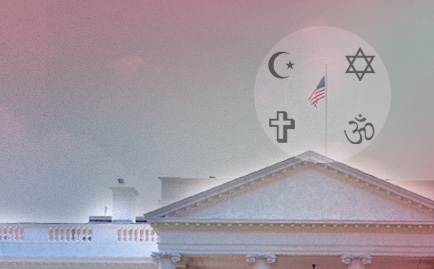 I’m troubled when I see presidential candidates pull out the faith card. It’s even worse when they do it in ways that try to “out-Christian” the other candidates. I can’t help but wrinkle my brow with a hint of disgust and “are-you-kidding-me.”

When I was a kid, my brothers and I would sometimes use the phrase “I swear to God!” when we were trying to convince each other we should be believed. Most young boys have integrity issues (as well as a penchant for deception), so we would occasionally feel the need to bring up God’s name to back up our own word. In essence we were saying, “You may not believe me on my own merit, but I’m bringing God in on this to back me up!”

We adults are far less likely to openly “swear by heaven,” but I can’t help but wonder if we aren’t just a little more sophisticated at it. Ever see a Christian businessperson with the Christian “fish” symbol prominently displayed on his or her business card? I’ve seen it on the cards of plumbers, carpenters, car salespeople, etc. I’ve even seen lawyers and doctors use it. I live smack in the buckle of the Bible Belt in Tulsa, Okla.—people slap Jesus on everything from pizza places to construction companies. But, if I’m honest, I really don’t want to know if they love Jesus when I’m ordering a pizza; I want to know if they make good pizzas (it’s been my experience that pagan pizza sometimes tastes better). Their religious affiliation is a non-question for me.

Some politicians may think they are honoring God by putting Jesus on parade, but I am suspicious that something more is going on—that many of these individuals are trying to use God to give them more credibility than they have earned on their own. I appreciate any person who is a Christian, but are they qualified to do the work they do? Do they have a good reputation? Is their customer service satisfactory? Or does their "fish" imply God is siding with them and so should I? Or are they trying to make me feel (consciously or not) like if I don’t use them I am resisting God in some way?

My father was a physician as I was growing up and he had a bad taste in his mouth about those who quickly referred to themselves as “Christian” doctors (he was an agnostic till late in life). This was because of a missionary doctor he knew who had come back to the States to practice medicine after being gone for nearly 20 years overseas. My dad said he was prescribing drugs that had stopped being used 15 years before. He told me: “He should stop hiding behind his faith and get into some ongoing education classes. He’s a horrible doctor who talks about God all the time.”

Wouldn’t you rather have a surgeon who was known more for her skill than for her faith? If she were the best surgeon in the country and you found out she was a Christian—well, that would be cool. But wouldn’t you rather be operated on by a brilliant surgeon who may be a Buddhist than by a sloppy one who had a fish logo or cross on their office sign and website?

This is the kind of thing Jesus was pushing against when He forbade “swearing.” He said we are not to swear by heaven (Matthew 5:34), but to “Simply let your ‘Yes’ be ‘Yes,’ and your ‘No,’ ‘No’; anything beyond this comes from the evil one” (v. 37). He was telling us not to bring God into the equation to prove we are telling the truth or to prove we should be trusted. People need to work on their reputations and on being the best at what they do, not on swearing by heaven.

This goes for the political candidates as well. Always bringing faith into the discussion creates a distraction from the person’s actual record. Values and morality are important, yes, but are not always an indicator of one’s capabilities and policies. It avoids questions like: Is the candidate good at governing? Is she committed to justice? What is his voting record?

And why exactly do we need to know if one candidate is a person of faith? Furthermore, why should we be afraid of those who come from no faith or other faiths (in this particular election, the ongoing discussion of the credibility of candidates in the "cult" of Mormonism)? Is it because we believe that if we get the “right” candidate into office, that he or she will “fix” all that ails the human community? Those of us who are Christians should know better than that. It is simply not true. The “fix” we need will never be the result of electing the right public servant or having the right national resolve; it’s the stuff of God’s Kingdom. And that Kingdom is still on its way—it may be here a little, but it is not here fully. And it won’t be here fully until Jesus returns. That means this side of eternity all human systems will continue to be broken to some degree.

“Shouldn’t we try to fix what we can?” you may ask. Absolutely. But a candidate being a Christian doesn’t ensure that he or she can fix things anymore than it ensures that he or she is a good parent or a wise businessperson (How many bad Christian parents and crooked Christian businesspeople have you dealt with?). What is really at stake here is not whether or not the candidate has faith, but whether or not he or she is actually good at public policy and has demonstrated the capacity to marshal the resources available for the good of all.

In St. Augustine’s massive work, City of God, he argued that secular rulers are still under the providence of God—that it is OK for the Church to work with those without faith as it pertains to the governance of a fallen world. Augustine points to Jesus’ claim that Pilate’s authority was given to him by God (John 19:11), though he was not a person of faith. The implication is that we should look for, hope for, pray for and vote for individuals who are the best candidates to lead—whether or not they lead us in prayer.

Ed Gungor is a pastor and author, and sometimes blogs at SaltTribe.

The Weirdest Google Maps Discovery Yet