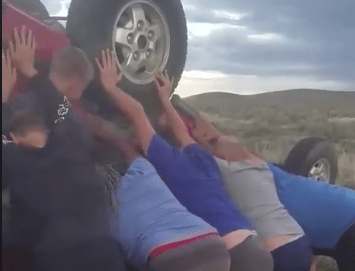 On their drive home from a national championship win in San Jose, California, this youth football team proved themselves heroes off the field as well when they rescued a couple whose car rolled on Highway 95.

When the team, appropriately named the Boise Black Knights, came across the accident in Oregon, head coach Rudy Jackson pulled over and the team swarmed out of the car to rescue the couple.

They pulled out the man who was trapped first, then pushed on the side of the overturned car to raise it up enough for another player to rescue the woman stuck inside.

Coach Jackson said that he was “more than proud” of his team.

“We just had to stop and become heroes.” he told the Idaho Statesman. “It was just a little adversity. It’s almost an unreal story.”

The coach went on to say that the team just “got out of the car like they were supposed to do that,” and that after completing the rescue mission, the team acted like nothing had happened.

One player captured the footage on camera, and a friend, Rachel Vasquez, posted it to Facebook.

“This is the true definition of teamwork, compassion and strength,” her caption read.