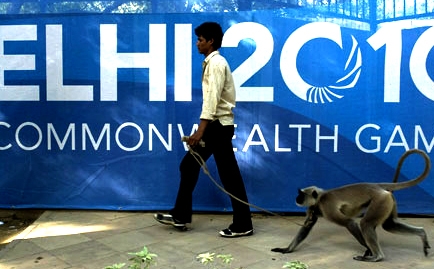 All the news you need to know, and plenty you don’t: [Editor’s note: Because of coverage of The Social Network (i.e. "The Facebook movie") tomorrow, we’re bringing you The Week That Was a day early. Enjoy!]

Jars of Clay, The Shelter

File this headline under the “sure to end well” category: “Trained monkeys hired to protect athletes, visitors at Commonwealth Games." Plagued by an infestation of wild dogs, snakes and several aggressive types of feral monkeys, organizers of this year’s Commonwealth Games being held in New Delhi, India have taken the only rational step in protecting fans and athletes: They’ve enlisted the services of even more aggressive, territorial and intelligent monkeys. After several teams threatened to not participate in the games because of the wild animal invasion and dangerous accommodations (according to the article, one athlete spotted a cobra in his room!), officials in India hired a squad of well-trained langur monkeys to protect them. As terrifying as a gang of monkey security guards sounds, at least this story has been confirmed: “Taliban can’t train monkeys to shoot U.S. soldiers with machine-guns, say scientists.”

As part of a Q&A session during his recent backyard conversations tour, President Obama offered some personal insight into his faith. While responding to the question, “Why are you a Christian?” the president told the audience he was a “Christian by choice” and the teachings of Christ have connected with him as an adult. Obama recalled how he “came to my Christian faith later in life” because “my family didn’t—frankly, they weren’t folks who went to church every week. And my mother was one of the most spiritual people I knew, but she didn’t raise me in the church.”

He went on, “It was because the precepts of Jesus Christ spoke to me in terms of the kind of life that I would want to lead—being my brothers’ and sisters’ keeper, treating others as they would treat me. … And I think also understanding that Jesus Christ dying for my sins spoke to the humility we all have to have as human beings, that we’re sinful and we’re flawed and we make mistakes, and that we achieve salvation through the grace of God. But what we can do, as flawed as we are, is still see God in other people and do our best to help them find their own grace."

He also gave this insight into Christianity and the presidency: “I think my public service is part of that effort to express my Christian faith."

More of his answer regarding the question about his faith in Christ can be found here: http://news.yahoo.com/s/ap/20100929/ap_on_re_us/us_obama_christianity

Porsche, the German luxury company best known for making sports cars driven by dudes with Bluetooths (Blueteeth?) on, has announced their next major product release. In what is certainly the only logical next step from extravagant sports cars, Porsche is selling five, high-tech Advent calendars priced at $1 million apiece. In the 24 days leading up to Christmas, proud owners of the Porsche advent calendar will open up a new subtle reminder of the humble, true meaning Christmas like a pair of 18 carat gold sunglasses, a lambskin jacket or a luxury yacht.

You can see pictures by clicking here: http://www.cnn.com/2010/TECH/innovation/09/29/porsche.advent.calendar/index.html

Millions of farm animals went completely neglected, organized crime levels dropped to the lowest in years and workplace productivity across the Western world skyrocketed last week as social networking hub Facebook crashed for several hours. For a few hours last Thursday afternoon, users trying to visit Facebook got this ominous message: "Network Error (dns_server_failure)." Facebook attributed the initial crash to a third-party network provider problem and were eventually able to have it resolved later Thurday evening. For a few moments though, Tom and the other three remaining MySpace users were the ones laughing at all of us (then their profiles froze up because of glittering animated GiFs, un-pause-able music blaring from an unidentifiable place on the page and a black and florescent custom HTML background that failed to load).

This week, an album that combines the talents of piano rocker Ben Folds and author Nick Hornby was released, marking a unique collaborative effort. Hornby, best known for the novels (which were later adapted into hit movies) High Fidelity, About a Boy and Fever Pitch, wrote the lyrics for Lonely Avenue, while Folds composed the arrangements.

Though there’s no unifying narrative, each song serves as its own mini-story. Though not all of the songs are ripped from headlines, the song “Levi Johnston’s Blues” (a first-person lament about being the future son-in-law of the vice president) has gained the duo some mainstream attention (Time magazine and CNN both covered the album’s release, noting the song).

Why Social Media Is Good for Us