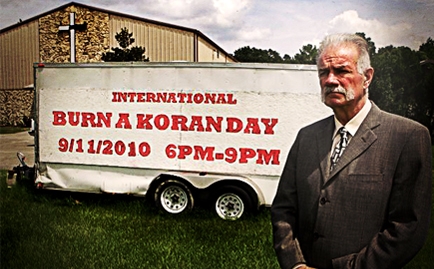 The average Christian had probably never heard of Pastor Terry Jones of Dove World Outreach Center. That is, until recently, when Jones landed in the national media after declaring his church would burn Qurans—Islamic religious books—on the anniversary of 9/11. (He’s since postponed the burning, but not before hogging headlines for weeks.)

This was actually not the first time Jones had staged a protest that gained media coverage. According to the Gainesville Sun Online, the newspaper in the city where Dove World Outreach is based, Jones also got himself into political hot water by staging a “No Homo Mayor” campaign against gay mayoral candidate, Craig Lowe earlier this year.

As a result of these media-savvy protests, Jones’ words are being pumped into living rooms and iPads across the nation, speaking—at least as he asserts—on behalf of the Christian faith. And why not? The controversy over the proposed Islamic center near Ground Zero has grabbed center stage on all the major news networks.

But Jones’ place at the center of this issue is disappointing for a number of reasons.

One, this is not what you want 9/11 news coverage to look like. In my book, Picking Dandelions: A Search for Eden Among Life’s Weeds, I recount my efforts of disaster relief work at Ground Zero—ones I made alongside so many. I had hoped some in the media would—as I plan to—commemorate the anniversary of 9/11 by thanking the rescue personnel who served our country.

Instead, the questions surrounding the issue have moved from commemorating those who served our country to opinions about the proposed Islamic Cultural Center and figures like Jones.

And this creates a bit of a dramatic, televised mess.

From a Christian point of view, I—of course—do not see all religions as equally valid. I believe the hope for America lies in the way of Jesus alone. And I understand that tenets of the Islamic faith and the Quran run counter to the teachings and life of Jesus.

I cringe not because I’m ashamed of what I believe. I am not. I cringe because of the radical, provocative methods Mr. Jones and others choose while claiming the same faith system I do.

There are a variety of ways to demonstrate one’s faith in Christ on this issue, and, suffice to say, I don’t think burning Qurans is a good one. I am trying to reason out what an appropriate faith response would be to something like 9/11. And here are some of the things that guide my intentional choice to not pump more volatile attitudes into our culture.

The Role Jesus Played. I learn from the priorities of Jesus Himself. Certainly, Jesus could’ve traveled from religious group to religious group, confronting His opponents, defacing their places of worship and burning their materials. He could’ve staged protests or raised a political militia. But that is not where He put His priority, time and energy. Instead of becoming a political revolutionary, Jesus sunk His time into offering spiritual truths that transcended even difficult times like the ones New York finds herself in today. He, in fact, taught His followers to love their neighbors as themselves, to love their enemies and to pray for those who persecute them.

What Jesus Said. Jesus focused on what the faith would bring to people and what it would save them from. For example, in His conversation with Nicodemus, Jesus mentioned that God gave His only son so  any who believed in Him would have eternal life. And He followed that famous verse, which often finds its way into baseball stadiums and other public forums, with a less famous verse that says, “God did not send his Son into the world to condemn the world, but to save the world through Him.” Jesus preached that He had come to give people “life to the full,” trusting—I think—that God’s desire to love and show grace to people was the most compelling message He had to offer.

What Jesus Didn’t Do. In several instances, Jesus’ followers wanted to take violent actions against unbelievers. The disciples, for example, wanted to call down fire on the Samaritans after they refused to welcome Jesus to their region. Jesus rebuked His disciples for saying this. Or later, during His arrest, a disciple pulled a sword and wounded an official taking Jesus into custody. Jesus’ response? He healed the wounded official and said, "Put your sword back in its place," Jesus said to him, "for all who draw the sword will die by the sword.”

I want to speak of the things God has shown me, like Mr. Jones does, but I want to be extremely careful to speak with the integrity of lifestyle I see in the life of Jesus. But here’s the tricky part; the part where the rubber meets the road. Having integrity doesn’t just mean praying for those who persecute us—like radical, extremist Muslims. It also means loving, praying for and showing grace to people like Mr. Jones, whose actions and words that incite violence (or, at least, raise the possibility of violence) make me cringe. God wants me to remember that every person in the middle of this is a person who God created, who God loves and who God wants to grow in their understanding of Him.

Sarah Cunningham is a blogger and author of Picking Dandelions: A Search for Eden Among Life’s Weeds (Zondervan, 2010).