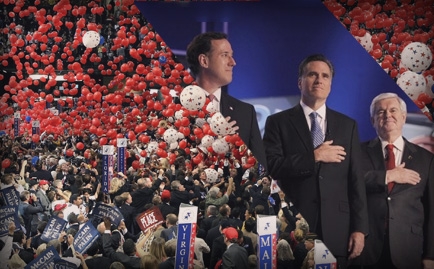 EDITOR’S NOTE: Like any election year, as 2012 progresses, political discussions will intensify—especially among Christians. For believers,there are always complicated questions of faith and policy, how oneaffects the other and when the two should be held separate. But whilethe questions might be the same, the answers people have are oftendifferent. Which is why RELEVANT is taking a few weeks to ask Christians ofvarious political backgrounds to describe how they arrived at theirparticular view and why they vote the way they do. We’ve already heard from a Christian Libertarian. Now, author Matthew Lee Anderson explains his decision to be a Republican, how virtue plays a role in politics and his hopes for his party and the nation:

If I had to set a relationship status on Facebook for my attitude toward politics, I’d go with “it’s complicated.”

Yet, I find myself voting “Republican” somewhere north of 51 percent of the time. The association is, admittedly, a tenuous one. But my faith informs my policy positions in a variety of ways, and I find the place where such views are most at home is among political conservatives.

The troubles conservative Christians have had keeping their faith and politics appropriately distinct have been amply documented, even if such points are often over-emphasized and inattentive to the good social conservatives have done (think: Crisis Pregnancy Centers). And yet, my faith informs my politics, first and foremost, by chastening it. It shows me my need for genuine virtue—the charity to listen, the honesty to pursue arguments and the courage to speak the truth. Politics evoke passion—passion that my faith in Jesus transforms, not by muting or repressing, but by redirecting to the permanent things.

Why Government Is Not the Solution to Virtue

I am firmly convinced a healthy society will leave a lot of room for churches and a variety of voluntary associations and groups to provide social stability and support.

The government is a legitimate authority, ordained by God to keep potholes filled and the streets safe. And when it does those things well, the Church can more ably perform its mission. Paul commends praying for rulers so Christians might live a quiet and peaceful life (1 Timothy 2:1-2). Despite the explosive growth of the Church under persecution, Paul seems to suggest the Gospel goes forward quite a bit easier if all the marauders have been put in prison.

Yet, the authority governments have been given is uniquely coercive. The government can command obedience. As such, governments often struggle to stay within their limits within a fallen world. Revelation speaks of the government as a beast, which means maybe we should not give it much meat (Revelation 13:1-10).

In short, when it comes to the way goods are created and distributed within a society, we ought to err on the side of those entities that are not given coercive authority by God: business, social services, the Church and a variety of other existing bodies. They aren’t perfect, and never will be. But for all the deception and sin that goes on within them, they lack the authority to coerce—and that is an important limitation.

Genuine liberty entails the responsibility of each to not only pursue his own welfare, but to recognize and respond to the needs of his neighbor, without the state having to tap him on the shoulder. My concern is simply that when the government becomes the solution to the erosion of our virtues, it will crowd out businesses that provide jobs and charities that provide both spiritual and material support. And in doing so, the remedy will prove more devastating than the disease.

It might seem like I am simply singing the chorus to the libertarian song (which, I might note, was done rather well). But the distinction is that conservatism treats the family, rather than the individual, as the building block upon which society is based. Family structures are not sacrosanct, nor are they free from sin. But at their best, they function as schools of virtue, instilling the habits of concern for other people that are crucial for a free and virtuous society. What’s more, strong families and dense family networks can minimize the need for state and social involvement when poverty is a danger by providing genuine support to those in need.

Limited government doesn’t necessarily solve every problem, not on its own, and Republicans haven’t exactly been consistent in their application of the principle. But if concerns about the slow and steady expansion of the state’s powers resonate anywhere, it’s still among Republicans.

The notion that the government is to protect against wrongs—to provide justice, and thereby safeguard freedom—is at the heart of the other main reason I remain Republican. For all their foibles, conservatives have been the most vocal and consistent defenders of those whose voices are silenced before they can be marginalized. I speak, with fear and trembling, of those parts of politics that are called “pro-life.”

There’s too much to go into here, and mentioning the point is enough to raise hackles. But let me note two things: First off, laws do in fact change some things—as the Civil Rights movement so clearly attests—and the promotion and support for sensible laws should be part and parcel of reducing abortions.

But second, laws don’t change everything, and I don’t think anyone in the pro-life community ever thought they would. Mothers must be cared for and poverty must be fought. The misconception that pro-lifers only care about laws is simply not true and driven by an unbalanced media narrative. Over the past 30 years, conservative Christians built an expanding network of care and support—the aforementioned Crisis Pregnancy Centers—as a way of supporting the lives of women and their children who otherwise would have been aborted.

Yet pro-life questions are not the only ones. There are other critical issues to attend to. A full list would take me beyond the bounds of the article, but here is a smattering of thoughts on four issues, leaving aside many that are as important, or more so:

Illegal immigration: Here conservatives are in a bit of a bind, as they value the family but also value the rule of law. As a Christian, I value both as well—and it seems Jesus’ parents did too. They returned home from their sojourning in order to fulfill the government’s mandated census. While various options have been put forward on this, the most attractive to me seems to be that articulated by Mitt Romney.

Religious liberty: It surprises me that this has become a partisan issue, but increasingly it has. The recent decision, for instance, to force Catholic institutions to insure contraception is a clear overreach of the government’s authority.

Foreign aid: Given our current budget crisis, I might support proportionate cuts to our (already slim) foreign aid. But we should note what this is: a narrative that allows conservative politicians to claim the appearance of fiscal responsibility without the substance. The path to fiscal sanity lies through Medicare and Social Security—which, given the degree of difficulty and entrenched political interests, may as well be Mordor.

Debt and spending: The debt the government has taken on the past few years was intended to offset the debt consumers and businesses were desperately trying to shed. Which is to say, in our current crisis we are all complicit. Yet massive deficits are simply unsustainable, and are going to force brutally difficult decisions down the road by our generation.

Hope Is Not a Slogan

Politics is a sphere of life that demands and builds hope—and not a cheesy, sloganized sort of hope, but the confident longing expressed by the prayer, “Come quickly, Lord Jesus.” We are fundamentally citizens of another Kingdom, and our fulfillment as citizens of this one will be only limited and partial. Yet, as we live with friends and neighbors—Christian or not—we are given the opportunity to remember our common humanity before God is more permanent and powerful than the policies and politicians we support. And in that hope—that longing for Christ to someday come again—we can begin sowing the seeds of peace.

Matthew Lee Anderson is the author of Earthen Vessels: Why our Bodies Matter to our Faith. He writes regularly at MereOrthodoxy.com. You can disagree with him on Twitter.