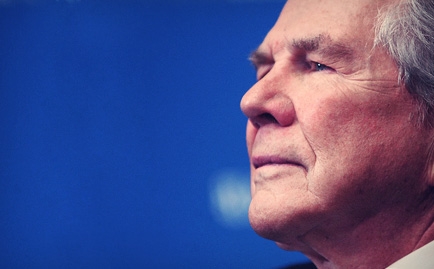 Pat Robertson is wrong about bodies.

The founder of the Christian Broadcast Network, one-time presidential candidate and frequent offender of public sensibilities committed his latest offense this week by suggesting a husband could divorce his wife and “start all over again” if she had Alzheimer’s. Robertson hedged by suggesting they should invite a professional ethicist to address the issue, but the damage was already done.

The remarks were greeted by stern rebukes by mainstream evangelicals, including Christianity Today and Russell Moore. And rightly so: The view of marriage beneath Robertson’s advice is a stunted one, lacking even the imaginative vision of Hollywood, not to mention the tragic beauty of the cross.

But beneath every bad view of marriage is a bad view of bodies, and Robertson’s own understanding is no different.

The tragedy of Alzheimer’s is very real, but the fragmentation of the self that the inability to remember precipitates does not entail, as Robertson put it, that a “person is gone” or that Alzheimer’s is a “walking death.” While the debate over what constitutes a “person” is (and will be!) ongoing, as people who believe in an incarnate God, we should be wary of separating the person from the body in the way Robertson does. We are something more than minds that are floating free in the ethereal and insubstantial regions of space.

The point has significant ramifications for our marriages, for the union we enjoy is of two persons and for their mutual well-being. “With my body I thee worship,” reads the old version of the wedding service in the Book of Common Prayer (a prayer book that guides the liturgy of Anglican worshippers), a line that is as lovely as any in the English language. My wife didn’t let us say it in our wedding service for fear that it would confuse people, and I understand why. But it highlights the totality of the sacrifice that marriage requires, and points toward the body as the sign and symbol of my love.

Yet the sacrifice of my body is consummated in my affection and care for my wife’s. The love we have in marriage may not be exhausted by our concern for our spouse’s body, but it certainly includes their bodies—and not just their brains, either. The body is “the place of our personal presence in the world,” as Gilbert Meilander puts it, and the delight we have for the other’s presence is necessarily a delight of its manifestation in the body. The erosion of memory that Alzheimer’s causes makes this sense of presence less stable, but to suggest it can accomplish the final dissolution of the person is to ascribe to it a power that not even death has. For there is, within the Kingdom, a love that is even stronger than death.

In the economy of love and grace, then, the body is vital to how we communicate and receive love. Consider our Savior standing in the upper room, reaching out to His disciples. His body bears witness to the reality of his love, regardless of whether He speaks or not. He need only show the nail marks, for the cross He carried irrevocably shaped His flesh.

Marriage requires a covenant in part because loyalty is the lifeblood of love. But the body will decay, and the temple will come to ruins. We may not wear the bottoms of our trousers rolled, to quote T.S. Eliot, but my wife and I will almost certainly grow old. And in the slow corruption of our flesh, the vow takes on a new dimension, making it possible for us to imitate the sacrifice of Christ’s body through the giving of our own. It is the cross that is the shape of love in a broken world, and it is the cross we must carry in order to love broken bodies.

Matthew Lee Anderson is the author of Earthen Vessels: Why our Bodies Matter to our Faith. He writes at Mere Orthodoxy, and you can disagree with him on Twitter.