When news like that of the Petraeus affair breaks, it is always sharp and stinging because it is built on the harshest kind of irony. You don’t become a four-star general when you’re a person who shows, as Petraeus described his relationship with biographer Paula Broadwell, “extremely poor judgment.” You rise to that rank by excelling consistently and for decades.

It takes thirty or so years of active-duty military service to become a one-star general officer. This includes requirements that often go unnoticed by most civilians. For instance, military officers are expected to perform in the 90th percentile on physical fitness tests for the duration of their time in the fleet. (How many 50-year-olds have you seen on the pull-up bar lately?) Those who have even a semi-long military career are expected to earn advanced degrees, whether through formal military education or often from top universities.

The few men and women who wear stars on their shoulders are those who have demonstrated stellar performance time after time: commanding platoons, managing staff, planning strategic and tactical missions, working with outside agencies, displaying knowledge of other fields and specialties, surviving the realities of combat training and deployments. And they nearly always have that distinct military humility: an underlying commitment to service plus the ability to shut up and follow orders when required.

The point is: such individuals are impressive. We are not wrong to respect their achievements and to find elements of their character admirable. Some have even described them with the word heroic. But heroes save others, and when sinking by a scandal of their own making, these people are demonstrating not heroism but an obvious need for rescue.

And they’re not the only ones.

In the same way that we’re inclined to be surprised and taken aback by the presence of sin in a Petreaus-type’s life, we are every bit as surprised and taken aback by sin in our own lives. This is often because we think more highly of ourselves than we should, and it doesn’t initially occur to us to anticipate sin. You could say we have an anti-hero complex: we live as if we don’t need saving. In the times when we could be noticing our sin and repenting of it, instead we prefer to assume the best of ourselves, offering the benefit of a doubt for as long as we can get away with it. This is one of the reasons why we’re often in danger of showing the same extremely poor judgment that others have shown. Even hatred, even murder, even adultery, you name it.

It has been said that the only differences between an acorn and an oak tree are time and the right conditions in which to grow. So the apostle Paul admonishes the Corinthian church that if they think they are standing firm, they should be careful not to fall. He understands that a fall can happen at any point and to anyone. No person is so strong that he or she would be immune. If lust is the seed, for instance—and who hasn’t discovered that seeds of lust are planted?—adultery is simply waiting to take root and bud. All it needs is a little water and sun.

Throughout the Bible, this sort of rooted sin is illustrated, often through the stories of otherwise exceptional men and women. Abraham, for instance, doubts that God will provide him with descendants as promised. Sarah finds the idea outright laughable. Jacob plays favorites with his kids. Moses kills a man. David has an affair and plots a man’s death to cover it up. Samson sleeps with a prostitute. These are just a few examples, and from only the Old Testament. Yet each of these is included in Hebrews 11 among a group of people who were “commended through their faith.”# Some of us grew up calling them the Heroes of Faith, which is a categorization that the writer of Hebrews does not supply.

So the question to be asked, both in reading recent events and in reading the Bible, is: What makes a hero? There will always be another Petraeus for the headlines, proving that blemish-free resumés and listed accomplishments are not precisely what they may seem. And if you or I or one of the Hebrews 11 people had our name in as many lights as Petraeus does today, our sin would be just as unsightly.

On our own, what we do is dig holes and fall into them. On our own, we are incapable of the necessary rescue.

This is why the story of Jesus is called “good news.” There is a rescuer who makes it possible for us to be free from the sin that entangles us. He is the one true Hero, and by giving up his claim to the highest place, he has shown that he is the only one worthy of it.

He did not fall; rather he chose to become low so that others might be given the righteousness and standing he deserves. He left paradise so he could live among us, in all our crudeness and ugliness and grime. He did it so that we could rise.

He has come. He has given all there is to give, and he has done it because we need him totally. To understand this is to seek his glory and praise. It is to let the sheen wear off everywhere else.

Lisa Velthouse is an author and speaker who learned much about her sin during a six-month fast from sweets, as told in her memoir Craving Grace. She is married to Nathan, a Marine Corps infantry officer who installed a pull-up bar in their garage. They live in Southern California with their daughter Celia. Learn more about Lisa at LisaVelthouse.com. 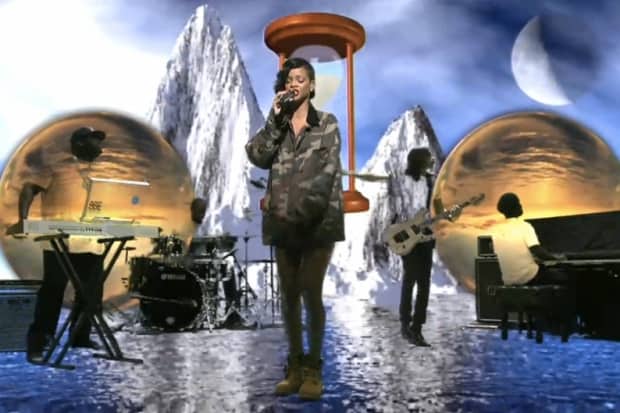 Has Rihanna Ruined Whatever ‘Seapunk’ Is?