I remember the exact moment I changed my opinion on the death penalty.

In 2015, I was a young conservative and an art student at The University of Alabama. I was one of 43 interns who would squeeze into a tiny 19th-century planetarium twice a week for meetings with my fellow interns at a university program centered around arts advocacy. On one such afternoon, the interns were treated to a short film preview; we watched a documentary that followed a man named Anthony Ray Hinton as he re-entered society after spending nearly three decades on Alabama’s death row. He was sentenced to death for a crime he did not commit in 1985 and was finally exonerated and released from prison on April 3, 2015.

If you asked me now, I couldn’t tell you the name of the documentary or the film professor who introduced us to it, but I can clearly remember the moment I saw the look on Mr. Hinton’s face as he was reunited with his family for the first time in 30 years. That facial expression, the mixture of relief, joy and sadness about time lost, shattered every naive assumption I had made about due process and capital punishment. It opened my eyes to the reality that the modern justice system in my home state was not as just as I wanted to believe — and in fact that it could be so wildly unjust as to force an innocent man to spend half his life waiting to be killed in retribution for something he did not do.

I had convinced myself that those convicted of a crime as heinous as murder were irredeemable. Seeing his face woke me up to the humanity of death row inmates, a population I had, up until that point, written off as disposable.

In writing about the ethics of the human face in his book Totality and Infinity, French philosopher Emmanual Levinas says, “[t]he face opens the primordial discourse whose first word is obligation.” This concept resonates with me. Viewing the face of another human being seems commonplace, but it can be such an intimate experience too. It reminds us of the respect we owe each other. It reminds us of our innate human dignity. For those who believe in God, it’s the imago Dei, the reality of God’s divine image present in every human person.

It means that no human is insignificant.

This idea also reveals why it can be so easy for us to ignore the humanity of certain groups whose faces we choose not to see. The death row inmate. The child in the womb. The asylum-seeker in a detention camp. The civilian living in a war-torn country. It’s so easy to protect our own comfort by looking the other way; meanwhile, the blood of those we ignore cries out from the ground.

This is why I believe it is necessary to embrace a Consistent Life Ethic — a radical approach to the protection of life which professes the dignity of every human being, at every stage of life, and in every circumstance. I can no longer deny that I am my brother’s keeper. I have an obligation to love my neighbors by resisting a culture which treats any one of them as disposable.

The term Consistent Life Ethic was coined by Cardinal Joseph Bernardin in the 1980s. Journalist Eileen Egan had another term for it: the Seamless Garment. That’s a reference to the tunic Jesus wore during the crucifixion, which was woven in one piece so it couldn’t be separated into parts, the same way this consistent life ethic can’t be split.

This philosophy began in Roman Catholic circles, but the idea is not exclusive to Catholics. I’m a Catholic, but Rehumanize International, the nonprofit I work for, is a secular group which advocates for the Consistent Life Ethic. It transcends political party lines and religious belief (or lack thereof) because it focuses solely on our shared humanity. 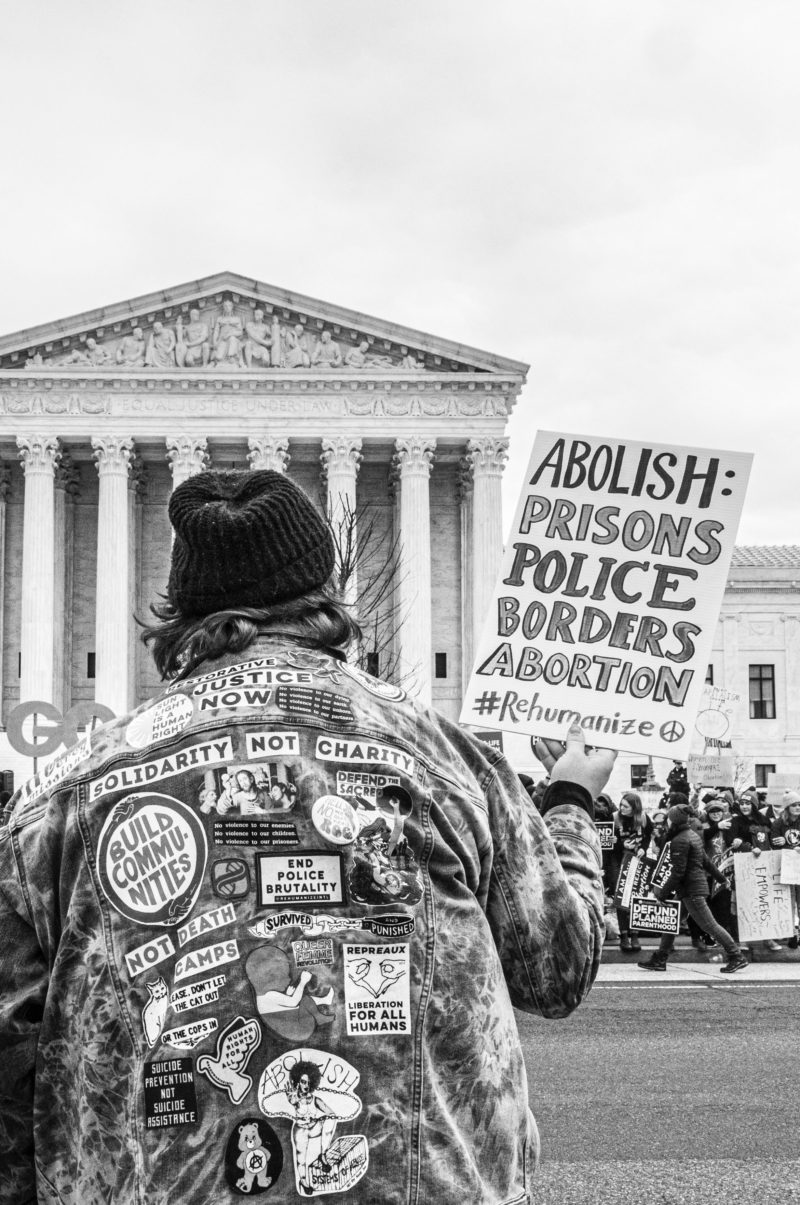 The Consistent Life Ethic eliminates qualifications when it comes to which human beings are worthy of protection. It distills the causes for life, peace and justice into their purest unified form. We don’t advocate against various forms of violence because the victims are innocent, or American or because they are able to survive outside the womb; the simple fact of being human is enough to warrant compassion.

This results in a blanket opposition to acts of aggressive violence against human beings, the list of which includes, but is not limited to: abortion, euthanasia, the death penalty, unjust war, assisted suicide, police brutality, torture and abuse.

The Consistent Life Ethic highlights the commonality of these issues, while still recognizing each as a distinct moral problem with its own gravity. For instance, when it comes to the number of people impacted by an act of violence, it is clear that abortion outweighs all the other issues within the ethic by far. In the United States alone, over 2,000 human beings are killed by abortion daily. War is the only other life issue to come close to that type of body count. This magnitude is why the United States Conference of Catholic Bishops — in their document Forming Consciences for Faithful Leadership which gives spiritual guidance to Catholics when voting — make the claim that abortion is a “preeminent priority.”

But the bishops also make it clear that Catholics may not use their passion for the anti-abortion cause as an excuse to ignore other injustices; in fact, the USCCB immediately follows their claim with a clarification: “At the same time, we cannot dismiss or ignore other serious threats to human life and dignity such as racism, the environmental crisis, poverty and the death penalty.”

We must strike a balance. When advocating for a particular marginalized group, we should not use their suffering, however grave, to dismiss the concerns of another marginalized group. The goal is a greater respect for all human life.

There is only so much each of us can do. We cannot expect to solve every issue, and we cannot expect to create heaven on earth — unless we want to set ourselves up for failure or burnout. But God rejoices when we choose to participate in His plan for humanity, which is, as the Lord’s Prayer says, for His will to “be done on earth as it is in Heaven.” It is good to work for justice, and to divide our time with God’s will in mind, while still acknowledging the reality that our human capacities are limited. This is why you can hold a Consistent Life Ethic embracing the importance of many causes but still feel called to focus your personal efforts on a specific issue. It takes all of us to affect change.

That’s why there’s incredible diversity in the Consistent Life Ethic movement. In my five years of involvement, I’ve met conservatives, progressives, marxists, libertarians, atheists, evangelicals, Quakers, Vaishnava monks — and everything in between. Some members of the movement advocate for and embrace total pacifism; others support Just War Theory and proportional self-defense. The Consistent Life Ethic transcends religious and partisan boundaries. It’s a call to “radical inclusivity” in regards to who we work with, since we have the same amount of inclusivity in regards to who we are fighting for.

With so many of the issues we address, we know that it will take a broad coalition to actually bring them to an end. That’s why we need to make a concerted effort to build a movement open to anyone willing to work with us to address these issues. In my work, I’ve fought for change alongside groups like World Beyond War, Conservatives Concerned about the Death Penalty, the Pro-Life Alliance of Gays and Lesbians, Witness Against Torture, Americans United for Life and more. These are single-issue organizations each play an important role in the fight for human rights, and the Consistent Life Ethic gives them an opportunity to find common ground, whatever our other differences.

I am personally grateful for that inclusivity. I began my work with Rehumanize International before I fully embraced the Consistent Life Ethic. When I interviewed for a summer internship in the early spring of 2015, I had not yet experienced my change of heart about the death penalty. I considered myself a conservative Republican, and I was interested in Rehumanize because I appreciated their ability to articulate the pro-life position from a non-religious perspective. The abortion issue was — and to be honest, still is — closest to my heart.

But as I broadened my perspective, I began to take a deeper look at my own motivations. I learned to question my own assumptions about what makes someone deserving of protection. Most surprisingly, while working for a secular organization, my faith life grew exponentially. I dug deep into Catholic Social Teaching while learning more about each issue, and I fell in love with the rich intellectual history of the Church. In so many ways, I feel like embracing the Consistent Life Ethic has taught me what it truly means to see my neighbor through the eyes of Jesus.

Last year in Pittsburgh, I got the opportunity to meet Anthony Ray Hinton face-to-face. He spoke at a local Presbyterian church about his experience adjusting and healing in the four years since he was exonerated from death row. His talk was profoundly merciful and hopeful, and it brought me back to that moment in 2015, when my eyes were first opened to the injustice done to my neighbors on death row. In opening my eyes, God opened my heart to accept one of the core tenets of my faith: everyone, everyone deserves mercy.

What’s in a Word?

You Should Read the LA Homeless Services Director’s Resignation Letter

America Is Running Out of Drugs for Lethal Injections