“Just one big idea. One big idea, and we can change the world.”

I made the mistake of uttering those words in the back seat of a car many years ago in the company of some older, wiser colleagues. We were racing from one meeting to the next, and I, the token twentysomething, was trying to divert attention away from work to a more exciting subject. Dreams.

Rattling off recent causes and businesses that had suddenly exploded, I marveled at the power of big ideas. It was, apparently, all you needed to change the world—and make a million dollars.

One of my colleagues smiled as I went on and on about the power of creativity. He eventually burst into laughter saying, “Really?! You think that’s all it takes? A big idea? You’ve got a lot to learn.”

At first, the words stung. But years later, after actually pursuing a dream, I realized how true they were. Finding your purpose is rarely as easy as we think it is. We tell millennials to go set fire to the world, that all they need is a big idea and enough passion to sustain them. But I have to wonder: are we doing them, and the world, a disservice?

Looking back, I wish someone would have told me these things earlier—or if they did, that I would have listened:

Telling someone to chase their passion is just plain bad advice. Or at very least, it’s incomplete.

So many people are wandering from one job to the next, wasting the best years of their life chasing a dream instead of mastering a skill. This problem doesn’t apply to just twentysomethings; it also affects people in their thirties, forties and even fifties.

Frederick Buechner wrote that vocation is the place where our deep joy meets the world’s need. I think that’s true. Finding your purpose isn’t about doing just what you’re passionate about. Of course, that’s part of the formula, but it’s only one part.

Finding purpose is really about opportunity—that place where your passion, skills and the needs of the world connect. When you find what you’re good at, what you love and what people want, you’ve found something special.

I used to think life was all about pursuing your passion. Now, I understand it’s about identifying opportunities and going after the ones that align with what makes you come alive.

Your Best Mentor Is Right in Front of You

In my twenties, I worked for a nonprofit—first as a copywriter, then as the marketing director. For the most part, I liked my job, but that didn’t stop me from wondering what I was missing out on. I spent seven years dreaming, seven years of longing, frustration and wondering what was next. Then one day, I met someone who opened my eyes to everything I was doing wrong.

Who was this mysterious guide? My boss.

The executive director of our organization, Seth, had a wealth of knowledge I was oblivious to, because I was blinded by my own ambition and arrogance. Having earned his MBA years ago, Seth was a smart entrepreneur, had a sharp marketing mind and was a great writer. I kept looking outside my circles for the perfect mentor, while missing out on the one that was right in front of me.

When I finally began taking Seth’s advice, I realized how much I had been missing. Years later, when I told him it was time for me to move on and start my own business, he said he was proud of me and admitted that I had outgrown my role. But it was his guidance that had prepared me for such a transition in the first place.

We all want someone to show us the way, but the truth is the best mentors are usually right in front of us.

Ideas Are Cheap, Action Is Costly

I used to be a big idea guy. Every few months, I’d tell my wife about some new project I was going to launch. This was it, I would tell her. This was the big idea that was going to make me famous and change the world. Usually, she would just smile and sometimes sigh faintly.

And of course, it never happened. I would get bored or distracted and move on, abandoning the big idea, moving on to the next thing. For me, it was all about novelty. The next, new thing was always better than the old. But after years of doing this, never seeing any of my ideas take off, I wondered if my approach was all wrong.

It wasn’t until I read a book by Scott Belsky when I began to reframe my understanding of creativity, dreams and what it took to do meaningful work. In Making Ideas Happen, Belsky writes, “It’s not about ideas. It’s about making ideas happen.”

After that, I stopped worrying about better ideas and started focusing on better execution. Sure, it’s great to have a good idea. And it’s certainly easier to make a good idea succeed than a bad one. But a decent idea with good execution is better than a great idea with zero execution.

It’s Not About You

Recently, I was in the back seat of a truck, driving through rural Kenya. My business had generated enough revenue the previous year that we were able to make a donation to a small nonprofit, and now we were on our way to see where it had gone. We were driving to the site of the building we had helped construct in the middle of a leper colony.

When we arrived, I was amazed at what I saw: The building was a one-room workshop, full of mothers with babies on their backs, furiously sewing handbags and school uniforms. They would later sell these at the market, giving a percentage of overhead to keep the building operational and keeping the net profit for themselves.

How did we get here? I don’t recall ever having a big idea. All I did was start a blog, sharing what I knew. Over time, this slowly grew into a business, which had brought me halfway around the world to something so much bigger than I ever could have imagined.

Honestly, I thought it was about me in the beginning, and standing in that camp just outside of Mombasa, surrounded by mud huts and red dirt, I realized how so very little of it had to do with me.

It reminded me of just a few years before when I was sitting in the back of another car and had made the mistake of thinking big ideas are what change the world. Now, I know better. Ideas are just the beginning. Passion can only get you so far. What it really takes to find meaningful work in this world is commitment. It means using the opportunities you have right now, sometimes sticking with a job longer than you’d like, understanding how God uses everything but loves to use our faithfulness.

Chances are, at some point in your life you’ll find yourself in the backseat of one car or another. The question is, will it be the one full of dreams, or the one taking you somewhere you never could have imagined?

Jeff Goins is the author of four books including his most recent, The Art of Work: A Proven Path to Discovering What You Were Meant to Do. He lives in Nashville with his son, wife, and border collie. Find out more about his new book at artofworkbook.com. 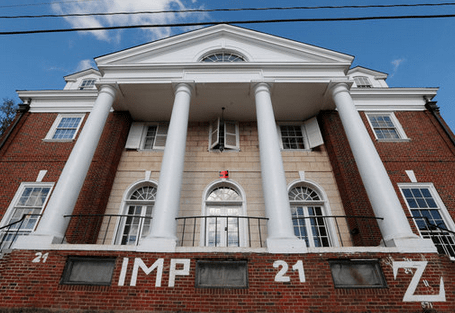 Police: There Is No Evidence of the Rape Depicted in ‘Rolling Stone’ Story