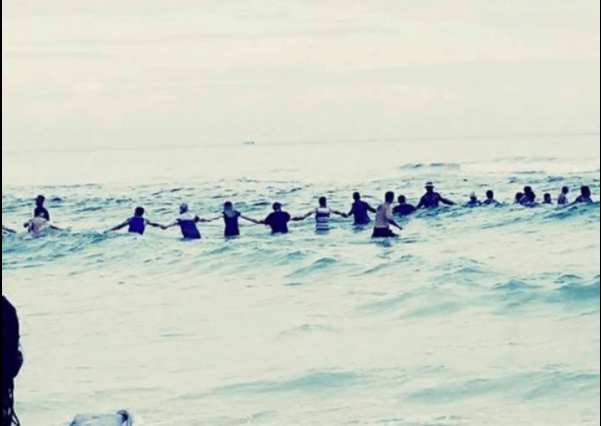 An incredible, daring rescue mission made up entirely of Panama City beachgoers was successful on Saturday as dozens of Florida beach bums joined forces to rescue a family who’d been caught in a riptide.

It’s peak summer season down in Florida, meaning Saturdays at the beach are pretty packed. According to the Washington Post, Jessica and Derek Simmons were just catching some sun when they spotted a few heads bobbing just above the surface about 100 yards out in the ocean. A family of six (four adult and two young boys) had gotten caught up in a powerful current, along with four other swimmers.

There was no lifeguard present and law enforcement officials were waiting for a rescue boat, but the Simmons took matters into their own hands. “These people are not drowning today,” Jessica Simmons thought, according to the Panama City News Herald. “It’s not happening. We’re going to get them out.”

The two boys—aged 8 and 11—had gotten caught in a current while boogie boarding. A nearby couple named Tabatha and Brittany Monroe heard the boys’ cries for help and paddled over to save them, but then they themselves had gotten caught in the riptide. The boys’ mother was the next to hear the cries for help, but upon paddling out, she also got caught, followed by her 27-year-old nephew, her 67-year-old mother and her 31-year-old husband.

“The tide knocked every bit of energy out of us,” the boys’ mother Roberta Ursrey told the Post. Monroe told the Post she felt certain she was going to drown.

But onshore, a rescue operation was mounting. Five people had formed a human chain and begun to venture out into the ocean, with one person remaining on the beach to anchor them from getting caught up in the current. Five more people joined the first five, and then ten more. And then, as the situation grew increasingly dire (and the sun started to sink) dozens.

With the human chain in place, Derek and Jessica were able to swim out to the stranded family with boogie boards and surfboards to keep them afloat. The two are strong swimmers (“I practically lived in a pool,” said Jessica. “I knew I could get out there and get to them”) and were able to reach the children and pass them down along the human chain, back to the shore. Then they rescued the Usrey.

At one point, Ursrey’s mother had a heart attack, and urged everyone else to go and save themselves. But fortunately, her son-in-law and great nephew were able to hold her above water while treading themselves long enough for the rescuers to reach her and bring her—and them—back to shore.

All told, it took nearly an hour, but all 10 people were brought safely to the beach, where they were welcome with applause. A few of the swimmers were briefly hospitalized and Ursrey’s mother remains in the hospital, but is in stable condition. “It was beachgoers and the grace of God’s will,” Ursrey said. “That’s why we’re here today.”

An Iceberg the Size of Delaware Just Broke Away In Antartica