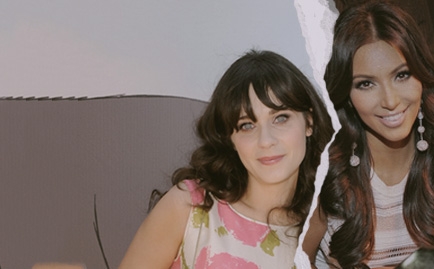 I found out Kim Kardashian was getting a divorce from Twitter, which means I probably found out before Kris did. I was kind of disappointed since Kim seemed like the most levelheaded of all the sisters. However, I wasn’t as personally invested in her marriage as I was Zooey and Ben’s—the only celebrity couple I’ve ever screamed in excitement over. After all, she’s my favorite actress and he’s the musician that got me through my high school woes. But even Hollywood’s most adorable couple couldn’t make the three-year anniversary mark. Sadly, men seem to be thrilled Deschanel is back on the market, while women are looking forward to Gibbard releasing more heartbreak material.

Despite being completely unfazed by this week’s celebrity divorce, I wondered why Kim was so quick to end a marriage that didn’t last as this long as this generation of the iPhone. What was she expecting to receive that she didn’t get? What was marriage promising her that wasn’t delivered? What sacrifice was too great for her to make for the love she had sworn to uphold before God?

Why did Kim, or any other celebrity, bother getting married in the first place?

What Could Marriage Offer Hollywood?

It is in Hollywood’s moral-deficient, anything-goes culture that we find a bit of truth about the value of marriage. Sex is given and taken freely, and there is no such thing as a woman needing to marry for money or security. More attention is received than even desired, and the entire celebrity population has been blessed with the good looks to lock down enough self-esteem for all eternity.

The role models of America are guaranteed sex, attention, fun, friends and money wherever they go, whenever they want it. What else could marriage possibly have to offer to someone living this lifestyle?

Humans are created with a desire to be a participant in a relationship that mimics God’s unconditional love for the bride of Christ. We are designed to be someone’s counterpart, and to experience life with someone under the same terms that God experiences it with us: unconditionally. It is a desire integral to our relational makeup, and a desire that permeates the whole of society, despite our religious beliefs. Marriage gives the hope of living and experiencing all of those things not alone.

God knew we needed committed love to guarantee a place of permanent safety in order to have the freedom to become our true selves. He offers this to us, and designed marriage to be a physical representation of the same. God knew the weight of perfection, of striving and of being good enough was too heavy for a relationship to flourish. So He gave us Jesus Christ to deal out grace where we fail, and the oath of marriage to teach us to do the same.

Unfortunately, Hollywood is selling marriage as nothing more than a current relationship status. Marriage is portrayed as an appropriate action to take when meeting a compatible partner, but as for its permanence and value? In a world built solely on temporary things, Hollywood cannot afford to look past today and see what life is like once sex, beauty, talent and wealth fade away. And so, in Hollywood, weddings remain something as praised as this year’s Golden Globe nominations, and as temporary as this week’s publication of Us Weekly.

I am not too jaded to believe that on Kim’s day of wedding bliss, she experienced the joy that comes with the hope of two hearts committing to one another. The hope of not having to experience wealth, good news, sex, success, failure, life and death alone. But I wish Hollywood would have told her that marriage’s benefit does not reside in what it provides in temporary happiness, but rather in what its permanent commitment provides over a lifetime.

One of the most profound glimpses into the purpose of marriage that God gives us is in Malachi. It paints the picture of a man on his knees, asking why God seems to be ignoring the sacrifices he has made for Him. In reply, God explains: “It is because the Lord is the witness between you and the wife of your youth. You have been unfaithful to her, though she is your partner, the wife of your marriage covenant. Has not the one God made you? You belong to Him in body and spirit. And what does the one God seek? Godly offspring. The man who hates and divorces his wife does violence to the one he should protect” (Malachi 2:14-16).

Take down your legalism-shield for just a moment and look at the heart of God’s character in this. God desires faithfulness, which is not just the absence of adultery, but rather the commitment to believing in the promise of marriage, even when we cannot see the good. He desires men and women who know God has created them, to mirror His one-ness. God wants us to understand that as children of God, we no longer belong to ourselves but rather to Him. God’s heart beats passionately for men and women who will commit to one another as help-mates, better enabling them to bear Godly offspring—and by Jesus’ definition of family, we know this means children of God, not simply biological offspring. Lastly, we find that God is one who desperately wants His daughters to be protected by men, not harmed.

After looking at why marriage is a praised and an incredible thing in the eyes of God, it becomes easier to see why Hollywood isn’t buying into it. It seems almost comical to expect a world that worships individuality, instant gratification and temporal achievements to promote or defend faithfulness or permanence in marriage. The money Kim made or lost on her wedding and Zooey’s new hot date may sell millions of copies of Us Weekly, but it is nothing compared to the love, protection and fulfillment that is ultimately experienced in a marriage that lasts.

Lauren Dubinsky is founder and editor of Good Women Project. She also writes on sex, relationships, dealing with pain and following Jesus on her personal blog. You can follow her on Twitter here.