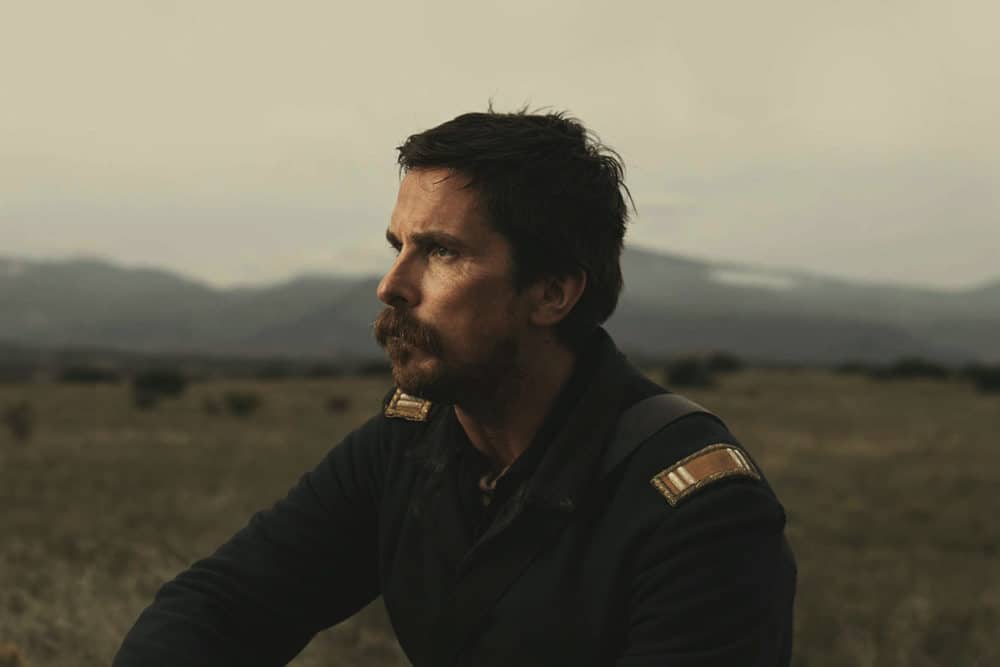 Westerns, by nature, feel liberating. The wide vistas expand with potential, but beneath the scenery lies that intrinsic, cliched lawlessness that informs every Western story from here to High Plains Drifter. Crime, especially violent crime, doesn’t ripple very far. Consequences are clipped. Blood washes away with the next inevitable, cleansing thunderstorm. Hostiles, directed by Scott Cooper and starring Christian Bale, brings the blood and the storm, but it also wants you to believe that no one comes away clean from this brutal, inexplicable period. Almost.

We begin with the murder of a father and three children by Comanche soldiers. It’s harsh, and the now-widowed Rosamund Pike sells the trauma. Her storyline converges with Bale’s malicious, militant Army captain, an Indian killer escorting one his most hated foes, Cheyenne chief Yellow Hawk (a keen Wes Studi), back to Yellow Hawk’s homeland in Montana.

For Bale and Studi’s characters, each of whom has killed scores of the other’s fellows, there are obvious eminent lessons about fellowship, unity, and peace. Hostiles is another Western about men coming to grips with gory pasts, though it does this with a touch more breadth, and a touch less honesty, than past cowboy-and-Indian flicks.

Like other Westerns, the violence of Hostiles doesn’t affect much beyond the characters, but to its credit, it does affect the characters a lot. The best parts of this movie deal with PTSD. Hostiles excels at giving its subjects a sense of history. These people feel like they’ve lived long lives—Cooper’s good with actors, and awesome with Bale (they worked together on 2013’s under-appreciated Out of the Furnace)—and that means when Hostiles brushes against old traumas and lingering memories, often explicitly, it feels earned.

The supporting actors pay the price for their sins. Ben Foster and Rory Cochrane give the two best performances of the movie as former soldiers under Bale’s command. Each troubled by “the melancholia” of lifetimes of killing, they exist as opposite sides of coin. The loss burdens Cochrane with helplessness, and it infects Foster with rage. The takeaways here are complex, understated, and satisfying in their inconclusiveness. Less so with Bale and Pike, whose personal resolutions carry Hostile’s final 20 minutes.

There’s a single glorious moment in Hostile’s final shootout. Max Richter’s score (fine, never matches his work on The Leftovers) collides with a power surge from Bale and a gorgeous frame from cinematographer Masanobu Takayanagi, and—yeesh—you’re driven into your seat. It implies the movie’s violent cycles won’t resolve Bale’s hateful motives, and it feels true. The consequences that so often elude Westerns crash around Bale. This last act of brutality will change him, right?  This will doom him, right? There’s no going back from here, right?

Wrong. Hostiles final five minutes veer toward the opposite answer, dulling its climax and putting a neat bow on what was for two hours a complicated, more interesting movie. The conclusion: Bale’s final act of bloodshed wasn’t a damning reversal, but a catalyst toward freedom. The violence paved a way for him to move past his racism and find reconciliation. His hate crimes were never the problem, it’s just that he was killing and hating the wrong people.

Cooper has been here before as a director. Out of the Furnace walks a similar path as Hostiles, but it holds course instead of taking a final left turn. That movie ends with a question—”Can violence bring an end to suffering?”—instead of the answer Hostiles provides: Yes. You can agree or disagree with that answer, but the point here is that one takeaway is elegant and the other is narrow.

Westerns don’t exist in a just world, and perhaps that’s their appeal. There’s a sense that this genre is able to strip away all the entanglements of setting and structure and offer up something so austere and barren that the focus must become human. The parallel between Western times and modern times is easy, because even though times change, people don’t, and all we have to pay attention to in Westerns—once we’re past the mesquite and the red rocks—is the people.

In that way, Hostiles is a movie that demanded to feel complicated, because when humans are met with death, the permutations of response are as wide as the Montana valleys. When Hostiles acknowledges that, primarily through Studi and Cochrane and Foster, it excels. It’s saying a lot. When the movie pulls in tight and becomes simple in its ending, you shrug at it, because its unjust world becomes neat and tidy, and that doesn’t reflect our reality at all. Hostiles finds justice that feels simplistic, and justice in our world isn’t simplistic in the slightest.

Grammys President, After Male-Dominated Show, Says Women Should ‘Step Up’