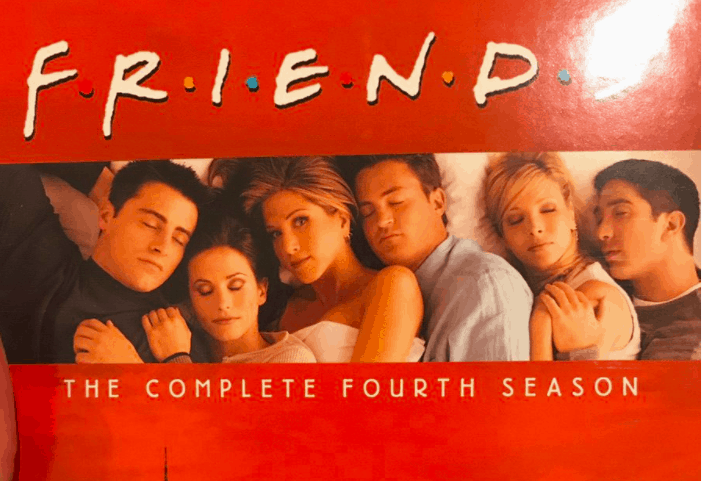 This day began like any other, with the sun rising on an earth divided by politics, united by love of family and community, and mostly just looking forward to the weekend. But this is not a day like any other, no. This is the day we blow the cover wide open on just what on earth is going on on the cover of the Friends season four DVD.

As first discovered by @thetedfox, the cover to Friends season four looks like any other. Just our titular group of pals splayed across the cover, looking bored and pretty and white as ever. But soft! What is that? Why is Rachel the only one with her eyes open?

A mystery for our time, one in which true and lie become one, and the heart and mind unite. What was Rachel trying to tell us, her eyes reaching through the gale, across time and memory, desperate to communicate a truth too beautiful or terrible for words.

A good possibility, but perhaps her thoughts were more banal (and in-universe).

they were dead the entire time any ways have a great weekend https://t.co/e47hcyan4P

The One Where Rachel Kills Everybody

The One Where Rachel Kills Everybody

Rachel is woke. The whole show is an elaborate allegory of social justice, and also being told by Mrs. Whiskerson. @thetedfox #Friends ? pic.twitter.com/CZj1LGcdmo

Other people had more banal theories.

Amazing coincidence, the other 5 all blinked at exactly the same time

The real Friends is the friends we made along the way.

Well? This mystery isn’t going to solve itself, guys. What do you think is going on here?

In ‘Spider-Man: Homecoming,’ Being a Hero Is Harder—and More Necessary—Than Ever