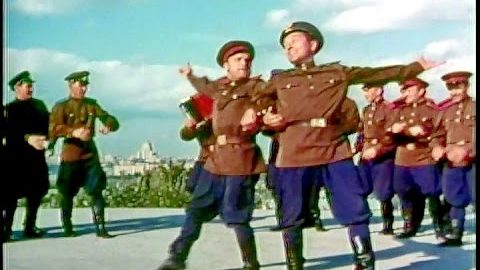 Twitter is mostly an awful website that polarizes its users into divisive echo chambers of misinformation, rewards toxic behavior and commodifies identity for the benefit of big companies. But then again, it also has given us Soviet Soldiers Dancing, so it’s not all bad.

The concept is simple but, like so many genius stunt accounts before, incredibly gratifying and seemingly endless in possible application. Old archived footage of USSR soldiers put to bops new and old doesn’t sound all that enticing on paper, but it’s absolute magic in execution.

A few things become immediately clear while perusing the videos on the account. For one, whatever your feelings on Karl Marx, it is absolutely undeniable that whatever was going on over in Soviet Russia was producing some world-class dancers. Two: “Toxic” was Britney’s best song.

Have fun trying to tear yourself away from this account. In the USA, we dance to songs. In Soviet Russia, songs dance to whoever’s dancing.

If Your Friends Are All Christians, You’re Missing the Point of Following Jesus

One Biblical Scholar’s Attempt to Uncover the Real Mary Magdalene