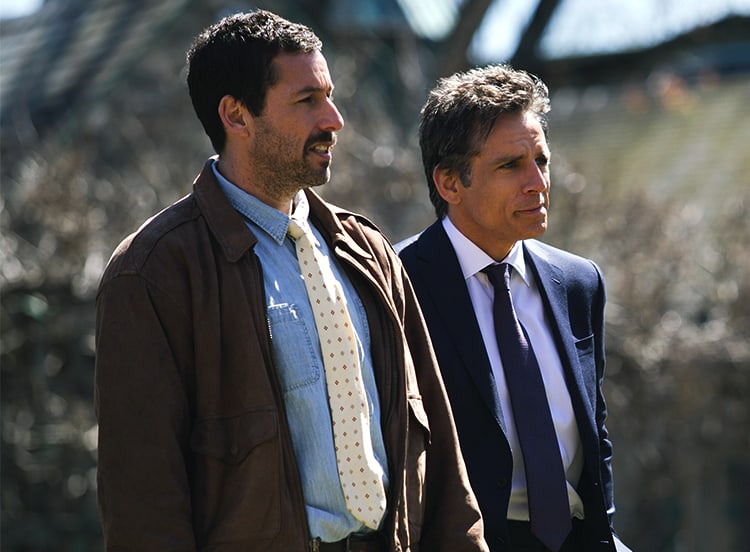 2017 has so far been a landmark year for Netflix original movies, with films like Okja, I Don’t Feel at Home in this World Anymore and The Incredible Jessica James reaching a level of widespread acclaim the content streaming service has been trying to achieve for years.

The latest Netflix-distributed film is The Meyerowitz Stories (New and Selected), directed by Noah Baumbach and starring Adam Sandler, Dustin Hoffman, Ben Stiller, Elizabeth Marvel and Emma Thompson. On the surface, Meyerowitz is a good, not great Baumbach film about a New York family’s dysfunction, which is no complaint considering the director’s stellar filmography, which includes Greenberg, Frances Ha and the more recent While We’re Young.

These are all great films (two of them also starring Ben Stiller), but what makes Meyerowitz stand out is its use of Adam Sandler as a serious actor. We’ve seen Sandler in dramatic movies like this before, and like Funny People, his narrative arc in this film mirrors his real life. He plays Danny Meyerowitz, a talented musician who never quite lived up to his artistic potential. His pride and joy lies in his daughter (Grace Van Patten), rather than his art, and the movie asks a straightforward question to that effect: Are children the creation of their parents? Are we our parents’ art?

This running theme is seen throughout a series of “chapters” in the movie, highlighting each child of Harold Meyerowitz (Dustin Hoffman). Harold is a vulnerable, melodramatic and cantankerous sculptor in retirement, now in his fourth marriage and with three children to look upon as his own pride and joy.

The siblings (Sandler, Marvel and Stiller) bond and bicker throughout the movie, usually comparing themselves to each other based on how Harold sees and talks about them when the others aren’t around. They question if their father’s work is really any good, because in a way, that would mean their lives would be subject to scrutiny because he’s the one who ostensibly raised them.

Granted, Meyerowitz is first and probably foremost a dramatic comedy about a neurotic family, complete with the snappy dialogue and dinner-table dysfunction you’d expect. But it’s also a movie hunting for something deeper than what we’ve seen before. Something spiritual and symbolic as it relates to how we define humanity. It’s fair to interpret Meyerowitz as a heartfelt parallel to the Christian idea of God the Father creating his children, mankind.

Are the flaws of men and women representative of the Creator, or are they purposeful imperfections sculpted by someone who loves them all equally, yet for different reasons? (A suggestion the film makes, but never commits to in Harold’s case.) And does this parallel hold true for parents and their children?

It’s certainly up for debate considering how common it is for family grudges to be built upon strife between parent and child, especially when it relates to success and failure in life. This is partly why Sandler’s performance is getting buzz for an Oscar consideration. His battle in deciding for himself whether or not he’s “made it” in his father’s eyes is laid out through an impressive, even physical performance, especially in a film where Stiller manages to steal much of the spotlight with his own separate motivations. Watching Sandler play a barely likable, yet earnest schmuck holds a lot of believability and resonance for how many already see him, both positively and negatively. And it’s always nice to see Sandler embrace a well-written role.

Unfortunately, the film’s use of Elizabeth Marvel is easily its biggest flaw, as she plays the quieter, third sibling whose story consistently gets bounced back to the other actors, even in her own micro “chapter.” Her understated performance, if given more substance, could have been the missing ingredient able to push this film to one of Baumbach’s greatest hits and perhaps one of the best films of the year. But even as it stands, Meyerowitz manages to introduce new ideas and topics for debate using one of Hollywood’s most polarizing actors, and that’s worth noting.

Meyerowitz sets up a story of redemption for Sandler (albeit, one we’ve seen before) that many of us can relate to as children of our own complicated parents. We want to find fulfillment through what they think of us, much in the way a piece of art might revel in its creator’s pride. For Christians who view God’s love as unconditional, we still have to reckon with what the Bible clearly says about how our lives will be evaluated by our Creator in the end: Well done, my good and faithful servant. It’s a sentence that won’t come easily, but that is most certainly the point.

Science: No, College Students Aren’t Part of a ‘Narcissism Epidemic’

Hey, Uh, Has Anyone Ever Seen Larry David and John Piper in the Same Place?