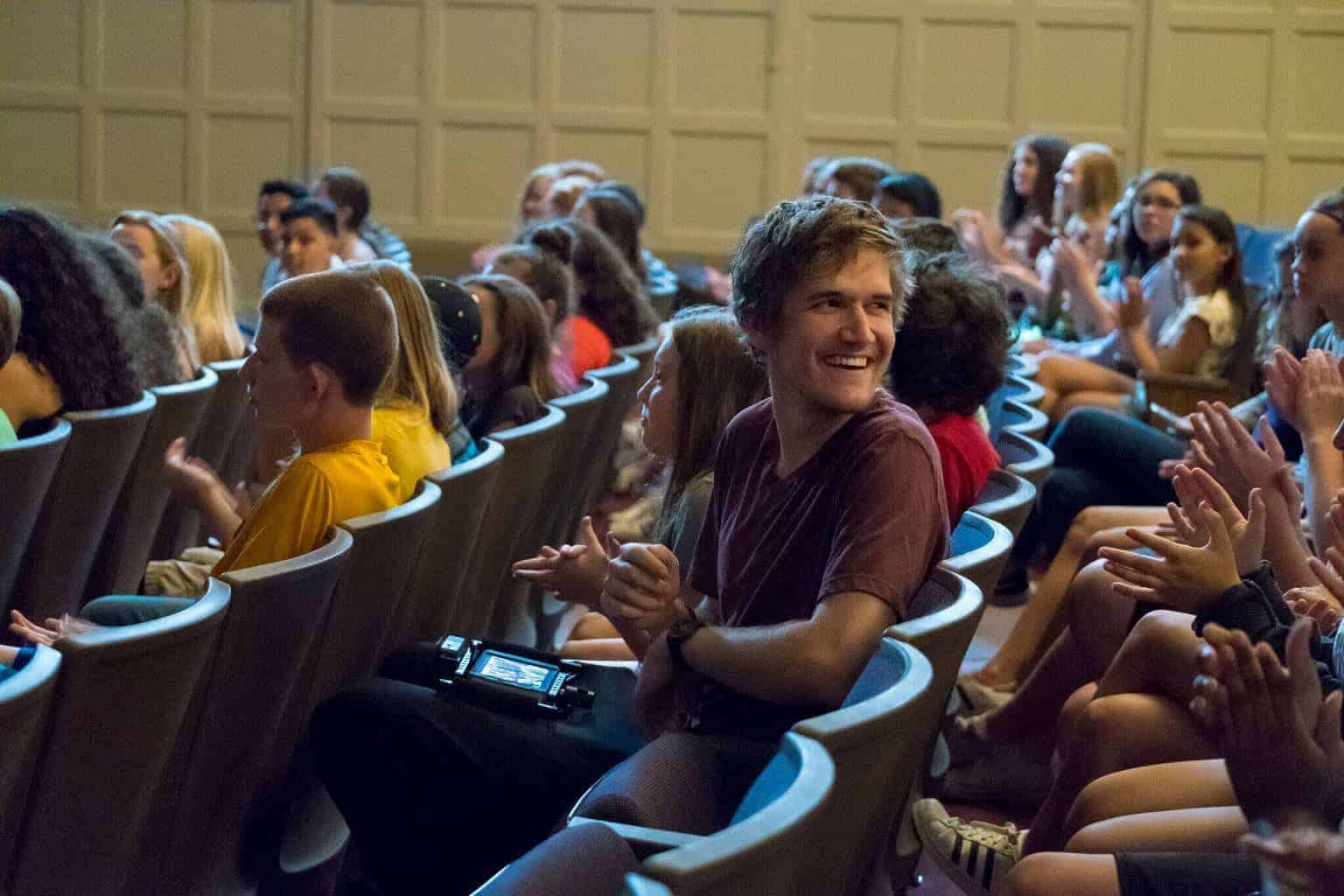 Eighth Grade, the just-released coming-of-age comedy from writer-director Bo Burnham and A24 Films, has drawn critical acclaim for its honesty about modern adolescent life. It’s the rare tech-engaged story that looks at social media and the internet in a heartfelt and non-cynical way.

Burnham, 27, grew up with the internet. He was a YouTube star as a teenager and used platforms like Vine to expand his comedy career. Eighth Grade is his directorial debut. We sat down with the former comic and (still-)rising talent to talk about the ideas behind one of our favorite movies of the year.

You’ve said this movie is about the internet. That’s surprising considering it can be called a coming-of-age story, too. So what do you mean?

Well it’s about the internet in part. I would say it’s about the way you view your life as a story you need to live well, and yourself as a character that needs to be put together to be seen. The internet turns life into a performance, and the movie’s about the struggle of who we are and how we want to be perceived.

I feel like that can be seen as cynical, but the movie doesn’t feel that way.

Yeah that was the hope, to just be descriptive. The more you know about the internet, the more confused you are by it. My hope for the movie was to never put judgment on it. I just wanted to take inventory of the way it felt. The internet is good and bad and weird and strange, and I wanted the movie to contain all those things and not just be a TED Talk. There has to be another way to talk about the internet that’s not a dystopian satire.

Why do you say the more you know about the internet, the more confused you are by it?

It’s changing so rapidly and it’s so wide and deep, I can’t get out of the trees to see the forest. I didn’t want to make a movie that was some big overarching statement. I wanted to make something granular and emotional. The only thing I am certain about with the internet is my confusion.

Let me piggyback off your metaphor. Why this particular tree? Because I think people see your name attached and then expect something different than a 13-year-old girl.

I think the internet makes eighth-graders of us all. We kind of act 13 on the internet, so if you’re following a 13-year-old, you can engage with it a little more honestly. At that age, you’re just so open and vulnerable, and feelings register as more intense. I wanted a movie that made intense moments out of very small things that weren’t really that consequential. That’s the story of being 13. The average day is life and death.

Yeah, and I think there’s something important there, too, about showing this through the eyes of someone who doesn’t know the world without the internet.

Yeah, exactly. To her, it’s not this other thing that came into her life to be processed. It integrates itself and doesn’t need to be treated as this outside force. It was just a part of her life.

And it kind of sheds an idealism, too. I was born barely outside of the internet and remember a small slice of my childhood that existed without it, so when I’m on Twitter, I’m aware it’s wrong in a sense. I think it’s good this movie doesn’t have that.

Yeah, this movie’s not her parent. I don’t see myself as a person that’s better than eighth-graders or has a better sense of the world than eighth-graders. For me, it was about exploring my unresolved feelings. This movie’s not going to tell you what to do or tell kids what to do or tell adults how to feel. It was my job to just be as honest and authentic as possible.

So if it’s personal, why do this from the viewpoint of an eighth-grade girl?

I’ve found I connect with movies most that I don’t align with demographically. It’s not exciting for me to see myself in a 27-year-old guy, but that’s the beauty of art to me, to see that there are common experiences in other people who don’t align with you, and deeper ideas and feelings we all share. I tried writing a version with a 27-year-old guy of some stories, but I was just so bored with it. I didn’t care about him or his feelings. When it was a kid, it was exciting and visceral and meaningful. Anxiety makes me feel like a 13-year-old. It’s a truer version of myself than myself.

Did that kind of anxiety occur to you as a teenager, when you were making videos?

I don’t think the internet asked deep questions of us when I was that age. It was like, “Make a MySpace page, make a Facebook page, make a funny little website or post a funny little video about yourself.” Now it’s Twitter, which is, “What do you think?” and Instagram: “What do you look like?” It used to be a fun little talent show-slash-bulletin board. Now it’s a weird emotional matrix or something.

Right, and that’s where we see the good and bad. Social media can raise tons of money to fight injustice, but it can also be super toxic.

Totally. It gives voice and visibility to people who didn’t have it before. It’s also set the culture on fire. It’s like the printing press. You can make The Great Gatsby or Mein Kampf. Truly. It’s a chaotic neutral sort of thing. It can be powerfully sad, powerfully good, any of that.

You Can Now Purchase the ‘Brady Bunch’ House