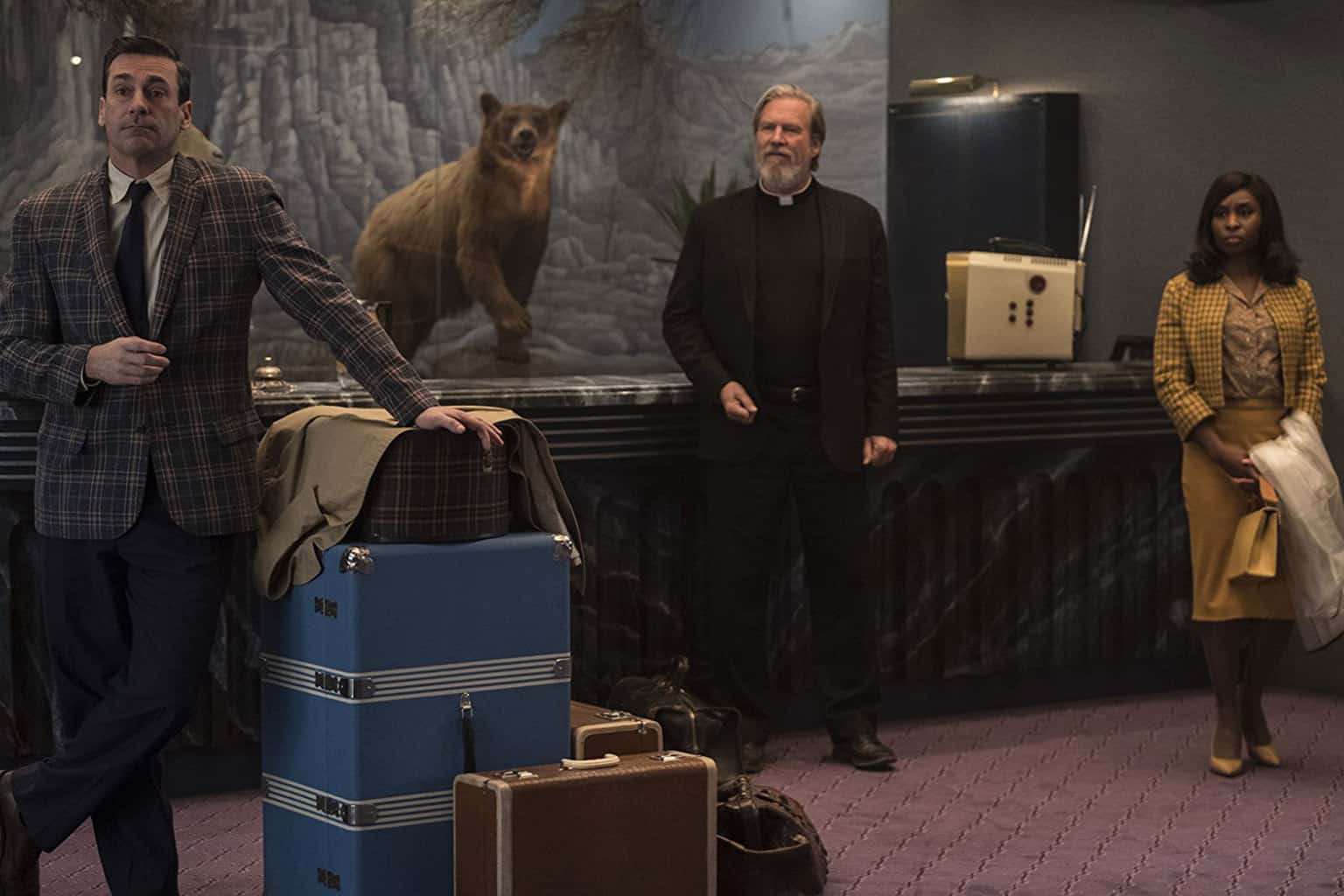 When a movie confines itself to one location, it usually seals in a sense of tension and suppression. Bad Times at the El Royale uses the same construct as movies like Reservoir Dogs or 12 Angry Men, but it forgets a key mechanism of those one-location greats. While other movies use their claustrophobia to wring out emotion and truth, El Royale only reveals information. That means we’re gaining knowledge, but not learning about people.

With secrecy at its core, El Royale is tough to talk about without spoiling, but here’s the barebones premise: Seven strangers show up at a southwest motel harboring various hidden agendas, and over the course of their one-night stay, those agendas are uncovered and the consequences ensue.

It’s a violent, long, narratively-complicated movie that nonetheless boasts a great collection of actors. Jon Hamm, Jeff Bridges, Chris Hemsworth, Dakota Johnson and Nick Offerman all appear, but none of them are showcased in any significant way. It doesn’t come off as a waste of talent so much as intense over qualification. Everyone here is just better than this.

El Royale is technically a mystery (why these people? why this motel? why now?), but its first mistake is failing to give us someone we can trust (or think we can trust) from the outset. Consider other one-location movies like Murder On the Orient Express or the aforementioned 12 Angry Men. Each of those movies enables you to step inside the story through a surrogate main character—renowned detective Hercule Poirot in the former and Henry Fonda’s Jury #8 in the latter. Each of those men is a virtuous authority in a world otherwise marked my distrust and deceit, and as contrasts to that world, they stand as pillars that steady the viewer. You have space to think, I don’t know what’s going on, but hey, I’m with someone who can figure it out.

Through a chapter-like structure that pivots the perspective from character to character, El Royale carries some energy and momentum in its plot, but fails to bring that sense of humanity. There’s an early half-baked attempt to align us with one of the guests, but even that person is shrouded in secrecy, and as soon as we have any answers as to their real motives, a twist takes away that anchoring point almost at once. It’s frustrating. By the end of Act One—a lively, if dense, 45 minutes—you’re still emotionally adrift. You know nothing, and it’s going to stay that way for a good long while.

Because El Royale holds you in the dark for as long as possible. It keep you in a place of intrigue but not in any sort of investment. The greatest points of interest come via a pair of sisters on the run, a forgetful priest and an oft-shirtless Chris Hemsworth (whose charms as Thor are deployed in more sinister fashion here), but the movie doesn’t ask you to care about any of these people so much as just wonder about them; after a while, this tack grows wearisome. Why work so hard to care about these people, anyway?

That’s sort of the cruel stinger on the other side of the story: El Royale is occupied by a lot of ill-intentioned, selfish people. Goodness knows this isn’t a deterrent on its own—modern pop culture has, if anything, made a cliche out of the antihero—but there’s no way to examine this bunch’s array of misdeeds with any kind of sophistication or moral assignment. You just wonder how bad they’ll turn out to be.

And turns out, for most of the players at this hotel, that’s pretty darn bad. In a final act full of twists and revelations, the biggest slap in your face is that, well dang, none of these people really had virtuous intent. Maybe that’s why the movie never let us in on anyone’s inner lives. If we knew everyone was a scumbag, why would we bother to stick around?

For that, Bad Times at the El Royale ends up being little more than a mystery-plot flex. It doesn’t want you to ponder anything; it just wants to keep you guessing, then surprise you. That’s a cheap thrill. Since there’s nothing real behind the shock, the feeling fades by the time you’re thanking the theater sweepers.

The glass half-full version of that paragraph looks something like this: Maybe because El Royale leaves you feeling that way, it’s signaling at our limitations for unmeasured depravity. It’s not really the presence of evil so much as the absence of good that grinds on you with this movie. Ultimately, El Royale feels unsatisfying because it’s not fair. You want something more because you know there should be something more, and that innate desire is, in a very spin-room type of way, worth heeding.

We don’t need the good guy to win every time, but with Bad Times at the El Royale, you’d love it if they at least showed up. This movie is a case study in miscalculation. One-location flicks are best when they use their boundaries to squeeze truth from the characters, and here, everyone spills their secrets instead of their guts. That makes for a tough hang at the movies, and a clean getaway impossible.