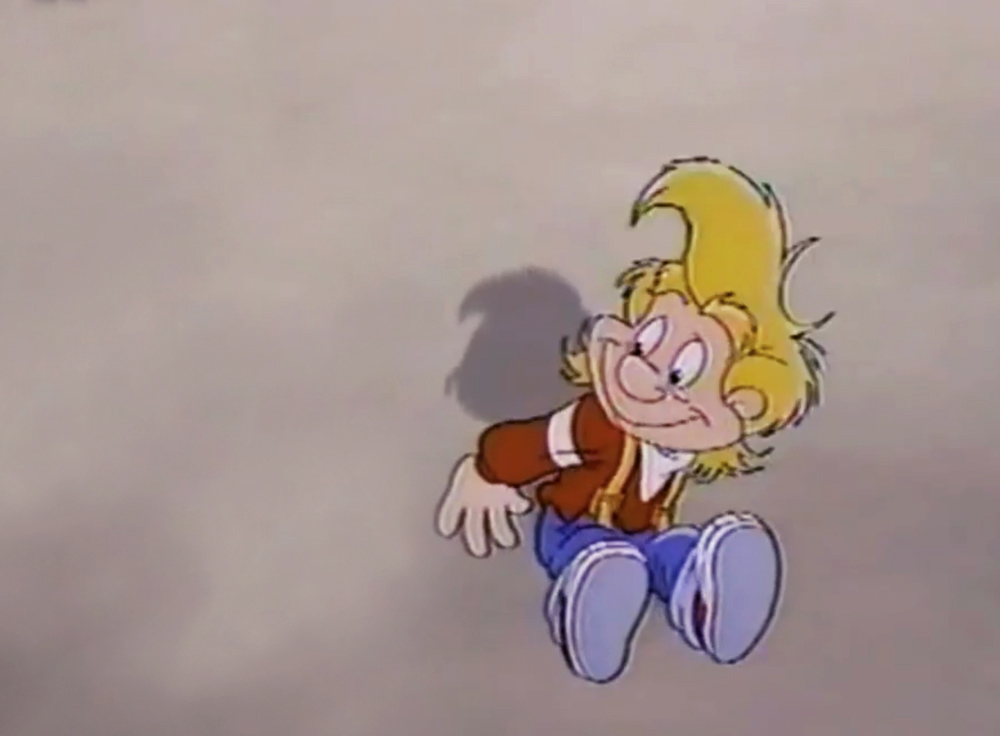 The Christian home video empire of the 90s was lucrative but small, which means there were relatively few titles for the family faithful to cull from when it came to building their VHS libraries.

Sometimes they were used to keep Sunday school tots in line while the volunteer workers poured their twelfth cup of Folgers, sometimes they were just something playing in the back of your local Family Christian Store to leave the kids at while mom searched for the perfect Thomas Kinkade painting to tie the living room together.

But whatever they were, if you were a Christian kid in the 90s, you saw them.

There were lots of McGee and Me titles to choose from, but The Big Lie was the OG video and the best introduction to the strange world of Nick, an artistically inclined youth and McGee who was …what was McGee? A spritely visitor from an animated dimension? Nick’s inner muse given life and breath? Perhaps he is a creation of Nick’s, whose artistic inclinations were so deft as to be virtually indistinguishable from real life?

Or maybe McGee existed only in the tortured recesses of Nick’s mind, a harried fever dream in which imagination and reality are one.

Oh, to be a church mouse in the wall for the Psalty the Singing Songbook pitch meeting.

“Well, we’re thinking a giant anthropomorphic hymnal, his dog and his army of choir children take a camping trip while singing songs about the persistence of faith.”

On paper, it sounds odd. On tape cassette—this concept’s natural home—it was harmless enough. But on video, it’s a smorgasbord of abject terror. Psalty looks like a Pennywise knockoff who got stuck in a wizard’s book and the dog. The dog!

Nature has spun no horrors more alarming than this dog, who looks like a human caught midway in his cursed transformation into a canine.

The kids are all handling it pretty well, considering they’ve been subjected to a strange taskmaster who teaches them to sing and dance, like Dickens’ Fagan who trained orphans to pick pockets. But this was far from the only bizarre character who collected children for his own musical machinations.

Whew boy. Where to begin.

For starters, Colby was not, despite the protestations of everyone around him, a computer. Admittedly, computers were pretty different in the 90s, but this is no computer.

No, Colby is very clearly some sort of android, a harrowing marriage of man and machine, the first instance of true singularity. He has the personality of a nebbish Downton Abbey extra, but dresses like an 80s breakfast cereal mascot.

Like Psalty, Colby has amassed a legion of youthful followers for the purpose of singing songs about the Bible. Unlike Psalty, Colby commands far less mastery over his tiny disciples, and seems that he is still in the early stages of sentience.

The children still follow him unthinkingly, save for Nick—a precocious and grating child, to be sure, but he is also the only one who has managed to keep from falling under Colby’s spell.

As you can see in the video above, Nick is a bit annoying—but someday, he may be the only one standing between us and Colby’s Matrix-style takeover of humanity.

4. Adventures in Odyssey: The Knight Travelers

Focus on the Family’s Adventures in Odyssey radio program was lowkey kind of great. Writers Paul McKusker and Phil Lollar were imaginative storytellers who invested their tiny fictional town of Odyssey with real warmth and drama, and though the stories could occasionally veer into moralistic sermonizing, they also had compelling characters and didn’t always finish with the pat answers associated with Christian kid stories.

But what works in radio doesn’t always translate to the screen, and in the case of the animated Adventures in Odyssey adaptation, things sort of fell apart.

Budget limitations cut Odyssey’s population down to something like 12 people, and the smaller, homespun tales that made the radio show such a treat were swapped for the sort of cartoon hijinks you’d see done with  more finesse on other Saturday morning shows.

Mr. Whittaker is still a boss though.

5. Veggie Tales: All of Them

What makes VeggieTales stick out from the rest of the entries on this list was the self-awareness they brought to the game.

Colby and Psalty were weird and hoped you wouldn’t notice. Bob and Larry were weird and leaned into it. “You think talking, Bible verse-spouting vegetables are weird?” you can almost hear creator Phil Vischer ask. “You ain’t seen nuthin’ yet.” One of them’s a superhero! Here’s a Grapes of Wrath parody! Here’s a 15-minute intermission for a non-sequitur song about lazy pirates! That “His Cheeseburger” song was nearly ruined by its ubiquity, but to go back and listen now, it’s an astonishingly bizarre, avant-garde, “dare-you-to-say-we’ve-gone-too-far-this-time” pop culture time capsule.

VeggieTales has become nearly as famous for its sudden implosion as it was for its unexpected success, as the theatrical film’s biblical bomb bankrupted the company. Given VeggieTales‘ early success, it was inevitable that there would be a movie.

It was almost as inevitable that the movie wouldn’t work, since so much of what made VeggieTales click was the allowances you’re only given on a small screen, where the stakes are lower and Vischer’s method of throwing everything against the wall whether it sticks or not can result in delightful oddities like “The Hairbrush Song.”

The Breach on the U.S. Capitol Is a Wake Up Call to the Church