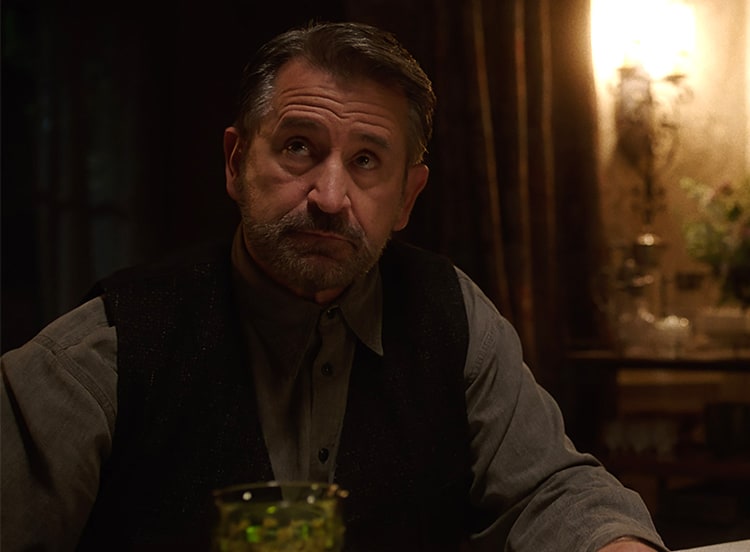 If movies were baseball, the horror genre would be the Albuquerque Isotopes. Just a stop along the journeyman’s highway of actors, writers and directors who hope to get to big budget or serious work. Horror movies are cheap to make and sell well with the teenage audience, so movie studios love them. But you’ll notice that there’s nary a trophy handed out during awards season to flicks about killer clowns to murderous chainsaw wielding madmen.

Of course, there are exceptions. Get Out shocked audiences with a mix of horror and comedy, and shocked Hollywood with a $252 million box office. The Shining, Psycho, Alien, The Ring and Cabin in the Woods are all essential viewing for movie fans (who don’t mind trembling under a blanket on the couch).

It’s time to add another title to the “must watch” list. On paper, Annabelle: Creation doesn’t look like much. It’s a prequel to the 2014 horror flick Annabelle and is the fourth in The Conjuring film franchise. Aside from Miranda Otto (Lord of the Rings) and Anthony LaPaglia (Frasier, Without a Trace), these are mostly up-and-coming actors. All the details smell like a straight to Redbox B-movie.

But somehow, everything comes together and Annabelle: Creation adds up to much, much more than the sum of it’s parts. This is only director David F. Sandberg’s second feature (after Lights Out, a 2016 horror flick), but it’s easy to understand why he’s rumored to helm the upcoming Shazam movie in the DC Universe.

Annabelle: Creation is art. Beautifully shot and acted, it doesn’t feel like the typical rush job produced as quickly as possible so that the checks will cash and everyone can get onto some real work. Simply put, this may take it’s place in the annals of pop culture as one of the most memorable movies of the decade.

Annabelle: Creation is built on a world of Christian theology.

Controversial theology, to be sure, and one that many (likely most) believers will object to. But none the less, this is a story about the Bible, faith and the forces of evil.

The movie is (very) loosely based on an alleged true story of Lorraine Warren, a grandmother who bought a Raggedy Anne doll for her granddaughter in 1970. Lorraine claims the doll levitated and tried to strangle members of the family. A Catholic priest drove the doll to a local museum to be kept behind glass (a very odd move, if you think something is possessed by an evil spirit) and claimed the doll kept tying to take over the car, and he had to throw holy water on it. Local lore has passed down stories of people who have tried to break past barriers to touch the doll, and later died in auto accidents.

While these may seem like nothing more than tall tales, there’s no doubt that demons show up in the New Testament. In Mark 5:11-20, Jesus casts demons into pigs. Of course, the pigs did not levitate and try to strangle anyone like the allegedly demonic Raggedy Ann, but there’s no doubt that the vast majority of Christians acknowledge some form of demonic activity in the world.

Annabelle: Creation is first and foremost a piece of entertainment. But with a Certified Fresh rating on Rotten Tomatoes and a projected #1 spot at the box office, this means that demons will have their moment in the pop culture conversation.

According to Father Robert (who does not want to use his full identity for interviews), a Catholic Priest trained in exorcism, Covens and worship of demonic forces are on the rise in the United States, but church leaders don’t know how to respond.

He says that if church leaders encounter the occult, they rarely know how to handle it. “Our religious leaders rarely if ever talk about it because for the most part it was never discussed in the seminary,” he says. “However, Jesus talks about it. Therefore, they exist.”

THE RISE OF THE OCCULT IN AMERICA

Father Robert believes that demons can and do interact with our world, when they are invited in.

“An infestation of demons in a location means that something invited them in. An infestation can be one or many demons depending on the type of spell, or prayer that drew them in.” he shares. “Possession means that the person no longer has control over his or her physical operation. Often times, the person will lose a certain amount if not all of their consciousness when the demon or demons take over. To drive a demon from a residence is much easier than to drive a demon from a human being.”

It’s a view that other camps within Christian theology are skeptical of, at best. “Darkness breeds darkness just like light breeds light,” says Sean Palmer, Teaching Pastor at Ecclesia Houston and host of the Not So Black & White podcast. “The Psalms teach us that deep calls to deep and human nature is consistent in that we become more of what we consume. Is it possible for a doll to be possessed by demons? I don’t know. It is possible for people to become nurtured by evil.”

It’s impossible to summarize what the Protestant wing of Christianity thinks of demons. Some segments of the charismatic movement put a heavy emphasis on spiritual warfare, and others, almost none at all.

At the extreme end of “no spiritual warfare” would be leaders like controversial author Rob Bell, who seems to make claims in his new book What Is the Bible that the idea of Satan did not enter Judaism until the Babylonian exile. By default, no Satan, no demons.

The Reformed tradition believes Satan and demons are at work in the world, but not in a horror movie kind of way where a doll strangles people.

“Demons are not Omnipresent and have limited power since all power in heaven and earth has been given to Jesus,” says Bob Bouwer of Faith Church in Dyer, IN. “The record of scripture only has demons entering people or animals, specifically pigs. A Christian can not be demon possessed. A believer can be demon oppressed from the outside if they dabble with the demonic. All of us are under the constant, everyday, temptations put before us by sin or Satan and his host. I also do not believe in ‘territorial’ demons.”

The Orthadox tradition is much more skeptical of the idea of demonic activity on earth. “Would Satan possess a doll? Sounds like a waste of time,” says Professor Eric Young of Olivet Nazarene University. “He’s not concerned with cursing inanimate objects. He concerns himself with people. In short, we sin when we participate with Satan and his plans. Cursed things are not cursed because Satan inhabits them. They are cursed because God has abandoned them.”

Whether or not Christians believe in demons, an increasing number of Americans do. There’s not much hard data on the subject, but one study cited in The New York Times called Wicca the fastest growing religion in America, which states “Many Wiccans practice some form of magic or witchcraft, which they say is a way of affecting one’s destiny, but which many outsiders see as evil. The Wiccan pentacle, a five-pointed star inside a circle, is often confused with symbols of Satanism.”

Annabelle: Creation is a well crafted film that tells a story the vast majority of Christians will find to be highly controversial.

Whether or not you believe in demonic activity on earth, it’s worth noting that Annabelle is rare for anything coming out of Hollywood to have a message that’s this strongly in favor of the Bible, prayer and turning to God in times of desperation.

A Lion In Winter: 160 Applebee’s and IHOP Restaurants Are Going to Close

Study: Millennials Divided On How Big of an Issue Racism Really Is