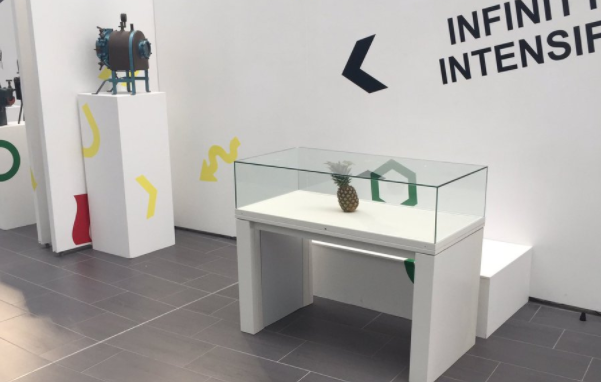 What is art? The question has befuddled philosopher and artist alike for centuries. Plato said art was the imitation of nature, but Plato never saw a photograph, which is a true reflection of nature. In the 20th century, abstract art dispelled the notion that all art must be representative, even as conceptual art elevated concept over skill. Today, art is an idea, as fluid and nebulous as a vapor. Or a pineapple, as the case may be.

Meet Ruiari Gray, a student at Robert Gordon University in Scotland. While admiring the art at an exhibition at his school’s art gallery, he tested a theory he was working on and left a pineapple behind on an empty table. Gray returned a few days later, and his theory was a smashing success.

So last week we placed a pineapple next to an art display and come in today and RGU have moved it into a glass display case. Amazing. pic.twitter.com/sMzTUlapDQ

“I came in later and it had been put in a glass case—it’s the funniest thing that has happened all year. My honors supervisor saw it and asked an art lecturer if it was real because he could not believe it,” Gray told The Daily Mail, according to Mashable.

So Gray successfully trolled an art gallery so hard that they enshrined his groceries as a true masterpiece. If that isn’t art, art does not exist.

Oh Man, Now You Can Dive Into a Pile of Scrooge McDuck’s Money