Religion has an interesting role in superhero comics. Earlier this week, we explored the strange spiritual themes of Moon Knight and now, Marvel’s comics are getting in on the action. In the debut issue of Immortal X-Men by writer Kieron Gillen and artists Lucas Werneck and David Curiel, one major X-Men villain suggests that Jesus may have been a mutant, like the rest of the X-Men.

Longtime Marvel bad guy Exodus is an ancient telepath who spent much of his early life as a French crusader named Bennet du Paris, a mutant and religious fanatic. These days, he’s in an uneasy alliance with his erstwhile enemies the X-Men in helping run a fledgling nation where all mutants, good and bad, can have refuge from human persecution. Unbeknownst to the world at large, the citizens of this new mutant nation have discovered a way to bring people back from the dead (comics!) and there’s been a lot of tension about the right way to wield this power.

That’s what sparks Exodus’ observation. “The Nazarene mutant inspired a church among the humans by raising a couple from the dead,” he muses. “I just watched you beat that in the last five minutes.” 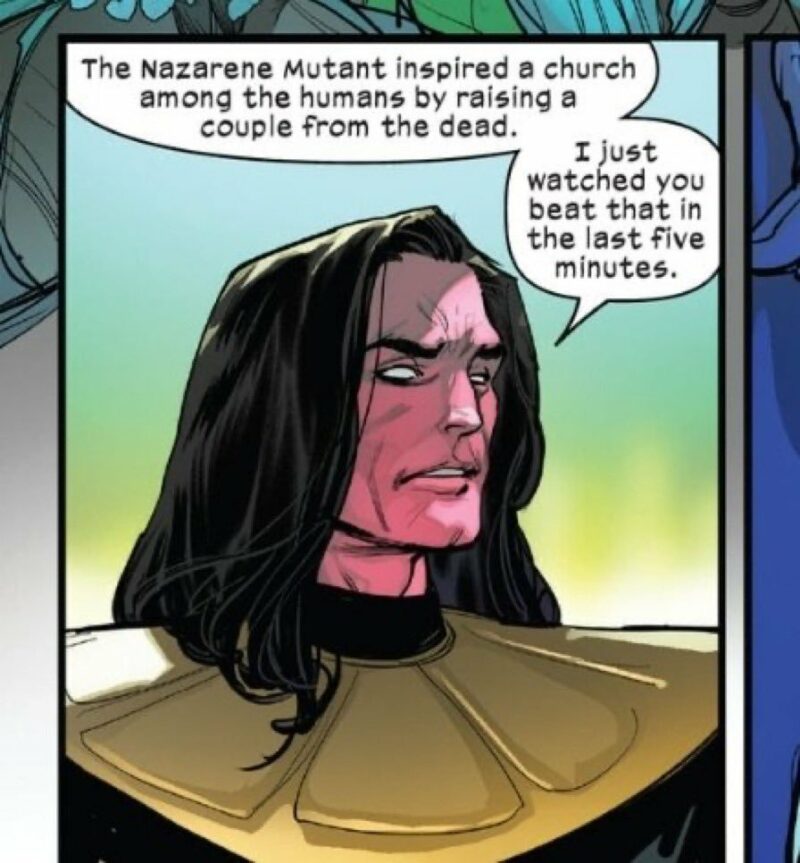 So, what does it all mean? Is Jesus Christ, Son of the Living God, a mutant in Marvel Comics? Let’s take a look at the evidence.

For starters, a core theme of the X-Men comics is that mutants are people too and having a mutant “gene” does not fundamentally change their humanity. At their best, the X-Men fight for justice and equality because many mutants face so much bigotry, discrimination and persecution. In other words, mutants are an ostracized group in Marvel Comics, and if Jesus identifies with one group in any multiverse, it’s the ostracized.

Now, that being said, we’re not given any indication that Exodus knows what he’s talking about here. X-men x-pert Connor Goldsmith, host of the mutant-centric podcast Cerebro, speculated that Exodus would naturally assume any human capable of miracles was actually a mutant, whether or not it was actually the case. “It’s a perfectly sensical line coming from him, but it’s presumably just his assumption,” Goldsmith tweeted. In other words, Exodus heard about a man who could heal the sick and raise the dead, and he naturally assumed it was a mutant power without really considering was “the Nazarene” was claiming about himself.

In any case, plenty of Marvel characters think of Jesus as God. The X-Men count many Christians among their number. Most notably, the classic blue, fuzzy teleporting German Kurt Wagner, nicknamed Nightcrawler, is a Roman Catholic, a former priest and the subject of a surprisingly theological episode of the old animated X-Men series.

And don’t forget the Illuminator. In the ’90s, Marvel teamed up with Thomas Nelson to create a spiritual superhero called the Illuminator, whose powers grew in accordance with his faith in God. It was a short-lived series, but it referenced events taking place in other Marvel Comics at the time, so that means it is part of Marvel’s main continuity.

So, yes, Christians exist in Marvel Comics (as do Jews, Muslims and followers of the ancient Egyptian deity Khonshu). Exodus may be making some big assumptions about Jesus but just look at this fit. Does he seem like the kind of guy who plays it safe when it comes to making assumptions?

No Concept of Holiness