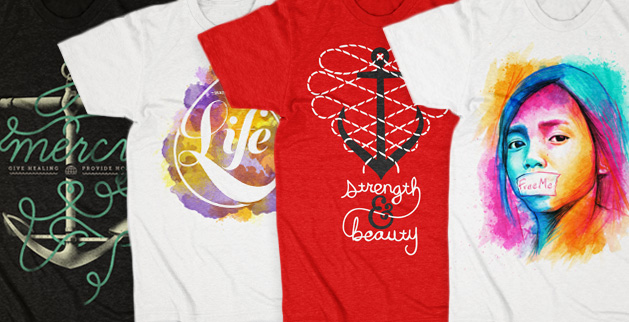 Dale Partridge has a knack for building brands.

By the age of 26, Partridge was overseeing one of the most popular pages on Facebook, running a successful advertising agency and spearheading a variety of other social media projects. It makes sense, then, that his most recent—and personal—campaign, Sevenly, has achieved big-league status in less than a year.

“[Sevenly co-founder Aaron Chavez] and I got together and talked about this whole concept of making world change. We wanted to start using this influence in a way that no one had ever done before.”

The pair began brainstorming and soon after, Sevenly was born. The concept sounds familiar—until you realize how unique it really is. Sevenly partners with 52 charity organizations per year (one per week) and designs unique T-shirt campaigns for each nonprofit. For every shirt purchased, the organization receives $7, which adds up to a large check that’s presented at the end of the week.

“We tried to create a model that was unbreakable. Something that was just so flawless that it had to work,” Partridge explains. “We grew so fast that it was kind of mind-blowing, kind of scary.”

Sevenly has designed original, limited-edition shirts for 16 causes to date, including the current campaign for famine-fighters Convoy of Hope, who are working to help the hunger-stricken people of East Africa. In keeping with Sevenly’s model of complete transparency, each campaign provides an attainable goal for the week, and an example of what the $7 from each shirt sale allows the organization to do. In its kick-off week, Sevenly raised $6,125 for child rescue organization International Justice Mission, providing 153 days of care for children rescued from the sex trade—all without any programming from the organization’s side.

“There really is no risk for the charity—that’s the whole model. We just cut them checks and pump their awareness out as much as we could. But we got shot down from quite a few [charities]. We now have about 18 weeks booked out,” Partridge says “It’s funny—all the charities that turned us down have now applied to us.”

Sevenly is booked for the next five months with good reason. Since launching in June of 2010, the team has managed to raise more than $67,000 in pure donations for the 16 charities they’ve partnered with. Working as a for-profit business allows Sevenly to work outside of the restrictions many 501(c)(3)s are bound by.

“This year we’re expected to cut $250,000 to charities. We’re going to act exactly like a nonprofit, just for accountability, building authenticity, building trust,” Partridge says. “It’s  an authenticity thing that social good organizations need to be focusing on clarifying to their communities, that their heart is in the right place. If we gave $8, we wouldn’t be in business. It was an opportunity to help the people who help the people overseas.”