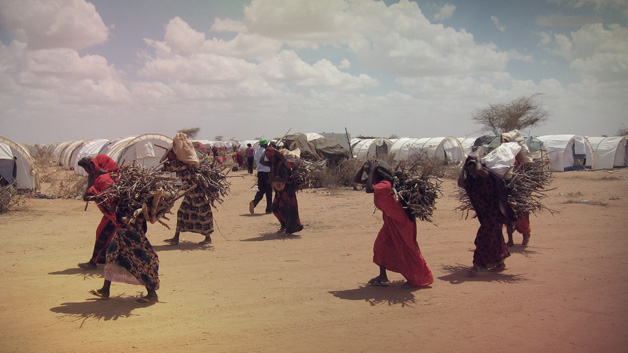 This week we received a donation of $60 toward our work at World Concern. While that might not seem worthy of its own blog post, it is. Trust me.

The check was sent by Kim Kargbo, the director of Women of Hope International, a fellow Christian nonprofit that helps women with disabilities in Sierra Leone improve their lives. I called Kim to learn why another humanitarian agency would send us a donation instead of putting it toward their own programs.

The story she told me confirmed my belief that anyone, in any circumstances, can be changed by giving.

A few months ago, Kim and her staff held a meeting with the women they serve. They do this each month to talk about issues related to their disabilities and ways to overcome them.

These women live hard lives—most of them are beggars themselves, living on less than $1 a day. Women of Hope helps restore dignity and purpose to their lives through their programs.

“I really felt like the Lord was telling me to challenge them to look outside themselves,” recalled Kim. “To go beyond themselves, and He would bless them.”

Having heard about the famine in Somalia, Kim went online to look for a video she could show the women. She came across World Concern’s Eyewitness to the Famine video and shared it with them.

She also shared with them the story of the widow in 1 Kings 17 who was suffering in a drought and preparing her last meal when Elijah came and asked her for food. The widow trusted God and gave all she had, being promised, “The jar of flour will not be used up and the jug of oil will not run dry until the day the LORD sends rain on the land.”

The women were moved by the video and Kim’s explanation of famine. Most of the women are illiterate and some didn’t know that Somalia even existed. But they knew about refugee camps from their own country’s experience with war.

Then, Kim asked them a question. “If any of you didn’t eat today, would you die?” They all shook their heads, no. They might be hungry, they said, but they wouldn’t die. “Well, some of these people, if they don’t eat today, will die,” she said. “Do you think there’s anything you could do to help?”

This time they nodded their heads, yes. Even if each of them pitched in just a few coins, surely it would help a little. Kim agreed and told them that Women of Hope would match whatever they raised.

“One by one, they lined up—blind women being led by the hands of children, and others in wheelchairs—to drop their few coins in a cardboard box.”

The women returned a month later for their Christmas party and had raised a bit of money, but not much. They wanted to do more. So they decided to take an offering that night. What happened next was amazing.

About 50 women came forward to give. One by one, they lined up—blind women being led by the hands of children, and others in wheelchairs—to drop their few coins in a cardboard box.

At the end of the night, they had $30. With their matching gift, they were able to send $60 to World Concern.

“I know it’s not much,” Kim said when I spoke with her on the phone.

“Oh, but it is,” I said. We’ve been asking donors to give $60 to provide emergency food rations, access to clean water and long-term assistance to a family affected by the famine.

Cathy Herholdt is the communications coordinator for World Concern, a Christian global relief and development organization whose supporters’ faith compels us to extend life-saving help and opportunity to people facing the most profound human challenges of extreme poverty. Their areas of expertise include disaster response, clean water, education, food security, child protection, microfinance and health.

This blog was adapted from the original post on the World Concern blog.

Apple Asks for Outside Auditor to Inspect Factories

Why I Am a Christian Democrat